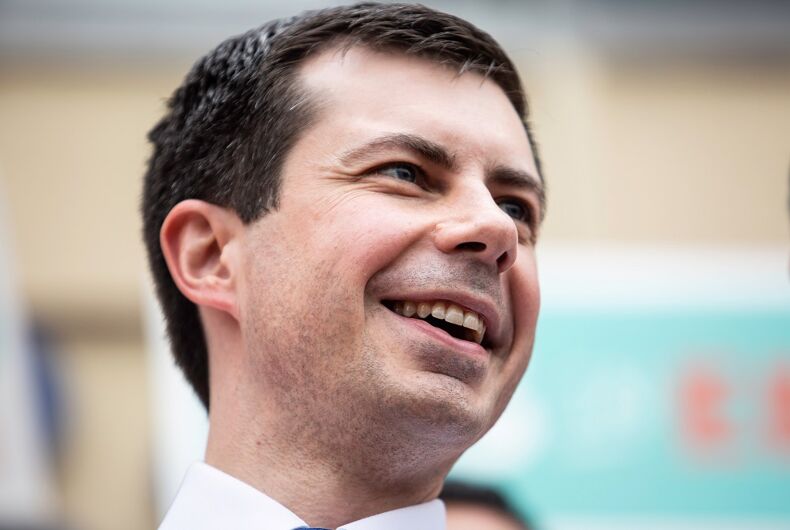 Republican members of Congress who denounced or voted against President Joe Biden’s Infrastructure Investment and Jobs Act that passed in late 2021 are now begging out gay Secretary of Transportation Pete Buttigieg for some of the bill’s funding.

But by June – five months before the midterm elections – his tone had changed. He wrote a letter to Buttigieg to “express my full support” for a grant application for an infrastructure project in his district.

In the letter obtained by CNN, he says the project is “important to Minnesota as it serves as a critical corridor of commerce” and that the stretch of highway in question has “real safety issues.”

“This grant also strives to serve as a social justice measure,” Emmer wrote, suddenly not so concerned about whether spending money on infrastructure counts as socialism. “The completion of this project means improved economic opportunities for ethnically underserved communities.”

“It’s hard not to chuckle,” Buttigieg said in an interview when asked about receiving the letters from Republicans who fervently denounced the spending bill.

“Obviously, it’s good for their districts, which is why it’s probably good for America.”

Buttigieg said that he is not taking Congressmembers’ past opposition to the bill into account when evaluating grant applications.

“We’re obviously not going to penalize anybody for the shortsightedness of their politicians.”

Emmer’s office didn’t see any contradiction, though, issuing a statement that said: “We’ll always answer the call to advocate for real infrastructure improvements in the Sixth District as a part of smart spending practices.”

Rep. Lauren Boebert (R-CO) was one of the most vocal opponents of the bill in the House, calling it “wasteful” and “garbage” in November 2021 and vowing to “hold these fake republicans accountable,” referring to the “RINOS” [Republicans In Name Only] who broke party ranks and voted for the bill.

Pelosi did not have the votes in her party to pass this garbage.

Time to name names and hold these fake republicans accountable.

In June, she was busted asking Buttigieg for over $33 million for a rural transportation project. Her letter stressed the importance of the project in improving “the sole paved access route to the South Corridor.”

“I respectfully urge your full and fair consideration of this competitive grant application,” Boebert concluded her letter.

In a statement, Boebert said she is “for investing in rural Colorado, but Biden’s so-called infrastructure bill was not the right way to do it.”

Sen. Tommy Tuberville (R-AL) also criticized the Infrastructure Investment and Jobs Act last year, accusing Democrats of “using fuzzy math and IOU’s to hide the real cost,” even though the bill was deficit-neutral.

But in an April 2022 letter, he seemed fine with asking for a slice of those costs for a bridge project in his home state.

“As a former mayor,” he wrote, appealing to Buttigieg’s experiences as mayor of South Bend, Indiana, “you understand better than anyone the time and money  that goes into applying for highly competitive federal grants like the RAISE Grant.”

And he also sent not just one, but three letters for three separate projects to Buttigieg between March and July asking for a piece of the action.

“In rural communities, such as those in the Verde Valley, we understand that often our best solutions are regional in nature,” Gosar wrote in a letter supporting a grant application for federal funding for a bridge and road extension project. “By working together, we improve conditions for all of our residents, businesses, and governmental entities.”

In a statement, Gosar’s office said he’s “not obligated to vote for a bill of which he supports 80% of the funding if 20% is horrifically absurd.”

“Once appropriated and authorized, Congressman Gosar is free, and quite willing, to fight for the funding authorized to benefit good projects,” the statement said.

While that’s technically true – Congressmembers can vote against a bill and they’re still legally allowed to ask for funding from that bill – the very polite tones of the letters belie the nearly apocalyptic language used to oppose the spending bill in the first place.

“They’re hanging on to our coattails while they’re opposing these things,” said Rep. Pete DeFasio (D-OR). “And that should have consequences, in my opinion.”

One month before the election, it’s anybody’s guess who will win the Senate

Elon Musk says communists made his trans daughter hate him