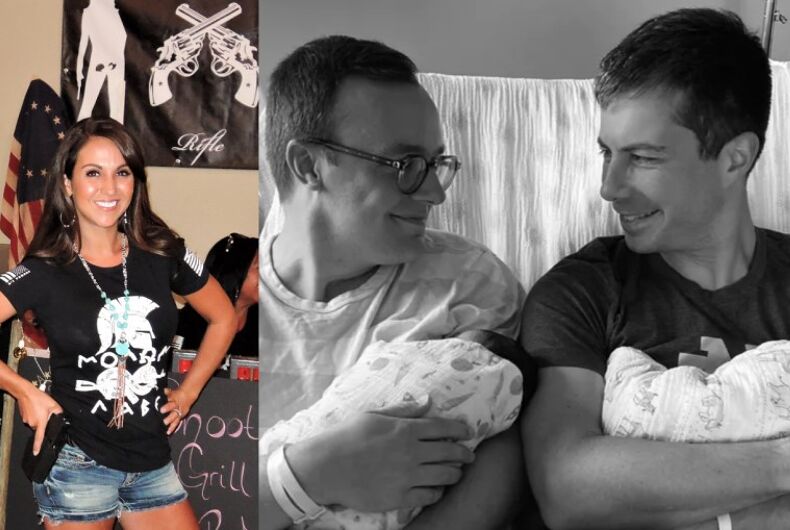 Rep. Lauren Boebert (right in left image) with waitresses and a Donald Trump picture at her gun-theme Shooters/Secretary Pete Buttigieg (right in right image) with his husband Chasten and their two newborn childrenPhoto: Shutterstock/Twitter

Rep. Lauren Boebert (R-CO) proudly proclaimed that she gave birth in a truck in order to insult out Secretary of Transportation Pete Buttigieg for taking “maternity leave” to “figure out how to chest feed” his children.

She also accused Buttigieg of not doing his job because he was “producing an R-rated movie” while showing a clip of Pete and his husband Chasten Buttigieg touching pinkies, fully clothed, before she said that “you can’t celebrate Christmas” this year because of Buttigieg.

In a rambling video posted to her YouTube channel, Boebert claimed that the U.S. has experienced “one of the worst supply chain crises since 1979” while pointing to a picture of men wearing short shorts – typical of the era – and snidely saying “when this was still in style.”

She said that “Mayor Pete” was “the guy in charge of it all,” even though the supply chain crisis started in 2020 with the coronavirus pandemic. The pandemic shut down manufacturing plants and slowed down global trade, so it’s hard to see what exactly Boebert wanted Buttigieg to do about that, especially last year when Donald Trump was still president.

Boebert, though, said that Buttigieg was to blame because he was “on a two-month maternity- paternity– whatever the heck you want to call it – leave, the guy was gone!” She was pretending to not know what gendered term is correct for referring to a gay dad.

“The guy was not working! Because why? He was trying to figure out how to chestfeed,” she said, using a term often used by transmasculine and non-binary parents. “Maybe someone should tell him, please, so he can get back to work.”

“Listen, I’m a mother of four. I delivered one of my children in the front seat of my truck. Because, as a mom of four, we got things to do. Ain’t nobody got time for two and a half months of maternity leave. We have a world to save here.”

“Mayor Pete may not have time to do his job,” Boebert continued, “but at least he made time to produce an R-rated movie with Jeff Bezos Studios.”

She then played a clip from the documentary Mayor Pete, about Buttigieg’s run for president almost two years ago. Buttigieg did not produce it – Story Syndicate did, – and it was mostly about events that occurred before he became the first out LGBTQ Cabinet secretary. It was distributed by Amazon, not “Jeff Bezos Studios.”

The clip she chose showed Pete and Chasten touching pinkies while fully clothed, possibly to show that the movie deserved an R rating, even though it got the rating for language.

“So when the supply chains crises [sic] means you can’t celebrate Christmas like Mayor Pete and Chasten,” she said disgustedly, showing a photo of the happy couple in front of a Christmas tree, “you know who to blame.”

Despite her mocking Buttigieg for being a good parent, a lot of people actually do have time for maternity and paternity leave. The U.S. is one of the few countries that does not have paid maternity or paternity leave. New parents in France, Japan, and Botswana get well over two and a half months of leave.

Boebert has a long history of opposing LGBTQ rights. She led a press conference outside the Capitol when Congress was voting on the Equality Act, where she went on an unhinged rant full of fake claims about transgender pre-teens and told reporters she is raising her sons “to be men” and she is “proud of that.”