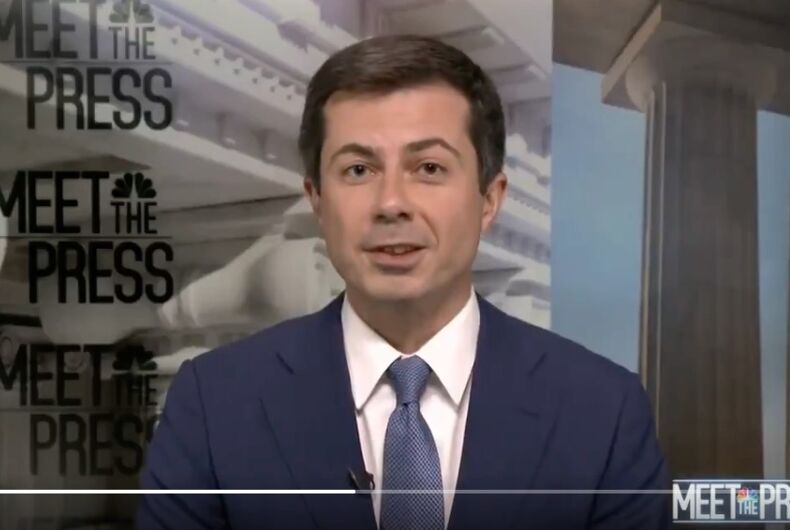 Out Transportation Secretary Pete Buttigieg has come under fire from conservative pundits and politicians for taking family leave to take care of his newborn twins with his husband, Chasten.

Fox host Tucker Carlson was particularly vicious, accusing Carlson the men of “trying to figure out how to breastfeed.” While Buttigieg clapped back at Carlson, on Meet The Press, he was more thoughtful as he pointed out some misconceptions about the policy and what it does.

Host Chuck Todd described the recent line of attack on Buttigieg as “bizarre,” acknowledging that Republicans launching an attack on a politician for being a good parent, is rooted in the idea that gay men shouldn’t be parents.

Buttigieg, for his part, skipped over the homophobia on display, opting instead of to focus on what family values really are.

He added that there are some misconceptions about what family leave policies are for and what happens. Many cisgender straight men simply continue going to their jobs, leaving their wives to handle all of the extra work that comes part and parcel with a newborn child – let alone two.

“When somebody welcomes a new child into their family and goes on leave to take care of that child, that’s not a vacation,” Buttigieg said. “It’s work. It’s joyful, wonderful, fulfilling work, but it is work.”

“And it’s time that our nation join pretty much every other country in the world and recognize that.”

More than 120 countries around the world give parents time off after the birth of a baby to bond with the child and make it easier to handle all of the myriad stresses and work that come with a newborn. The United States does not, but President Joe Biden has made it a priority for his administration.

WATCH: @SecretaryPete says paid family leave is a priority for the White House, despite reports that Democrats may drop it from the domestic spending bill.

Buttigieg: Paid family leave is “not a vacation.” #MTP pic.twitter.com/sNL18P9ldA

Kyrsten Sinema seems intent on dragging down the Biden presidency