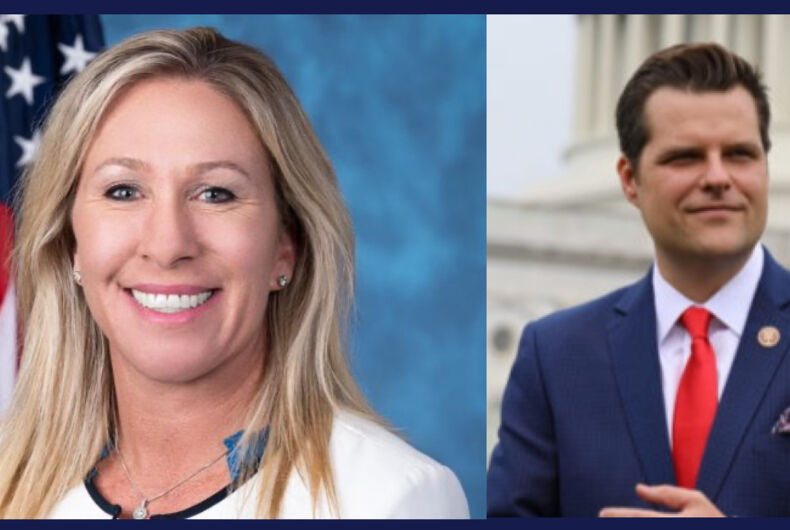 Reps. Marjorie Taylor Greene (R-GA) and Matt Gaetz (R-FL) both have reputations for making bombastic claims without proof or any ability to follow up on their promises. Together, the two launched the Put America First PAC, complete with a barnstorming tour of the heartland.

The duo claimed they were leading the vanguard of the new GOP voter and had the support of the average voters. Except their events were canceled and those that weren’t didn’t raise any money. Campaign donations for the two have also dried up as former supporters tire of their antics.

Greene and Gaetz spent the summer trying to raise funds for their PAC, but six months after launch, it’s almost broke.

While it originally raised over $360,000 in the first two months, money has dried up and it now only has about $13,000 left. Multiple events were canceled after public protest erupted every time they booked a facility.

Donations to the congress members’ campaigns have also hit new lows according to reports.

Gaetz, in particular, is going broke. After a string of sex scandals, bald lies, and poor excuses, voters are turning their backs on the beleaguered Republican.

While Gaetz raised $1.8M in the first quarter this year before the scandal broke, by the second quarter he had only raked in about $500,000. Last quarter he spent over $100,000 trying to raise more money than he actually brought into the campaign coffers.

Greene’s cash is also seeing a dip. While she hauled in $3.2M the first quarter, that’s dropped to $1.5M in the last quarter. Of that, she spent over a million dollars to raise it, leaving her with about $500,000 going into the bank.

Greene employs her former campaign manager’s fundraising firm to build up her campaign coffers, but the deal saw the man walk away with 70% of what she’s raising – and that doesn’t even include the hundreds of thousands of dollars she’s burning through for direct mail, postage, printing costs, and renting mailing lists of potential Republican donors.