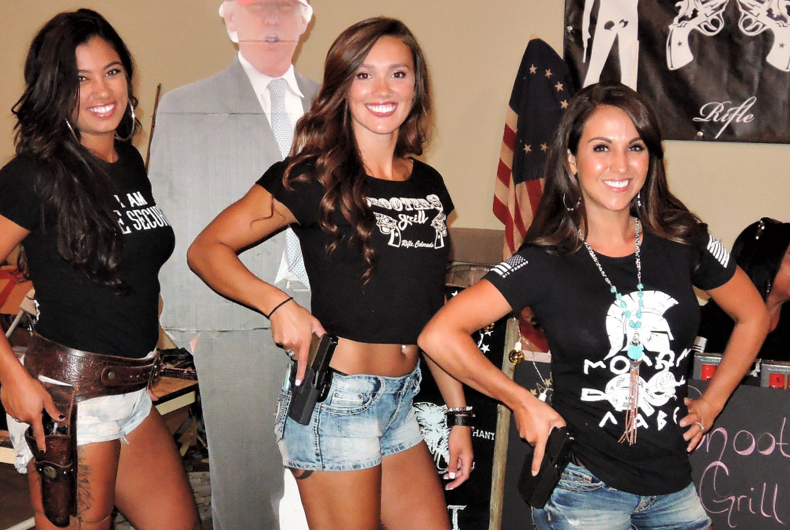 The landlord who owns the building where anti-LGBTQ Rep. Lauren Boebert (R-CO) and her husband run a gun-themed restaurant Shooters Grill is kicking them out.

“We were like a family,” Boebert told the Post Independent. “I would say Shooters, for any employee, was their life. We lived and breathed it every single day.”

Boebert said that she got a letter in June from Milken Enterprises, which owns the building in Rifle, Colorado, that their lease wouldn’t be renewed. She stressed that they “were not being evicted” despite the eatery losing hundreds of thousands of dollars in recent years.

“Well, we’re not being evicted. The lease is not being renewed — that’s a big difference,” she said.

The servers at Shooters carry weapons – mostly “semi automatics, because that’s what we practiced with,” Boebert stressed – and Boebert has made her love of guns a central part of her political message. She first got attention on the right in 2019 when she confronted then-presidential candidate Beto O’Rourke over his proposed buy-back program for AR-15s.

She said that the restaurant, which opened in 2013, wasn’t originally about guns but that employees asked her if they could open carry after a man was beaten to death in front of Shooters.

“There was an altercation outside my restaurant where a man was physically beat to death, there were no weapons involved, he was beat to death by another man’s hands,” Boebert said in the past.

That story isn’t true, though; the man died of a meth overdose.

Boebert said that she probably isn’t going to start another full restaurant like Shooters and may instead open a cafe with a gift shop.

“We would just dramatically scale it back, because, obviously, we’re not in our building,” she said. “It may look like a Shooters coffee shop with pastries and some easy breakfast sandwiches and merchandise.”

In 2017, Shooters gave 80 people food poisoning when they sold food at a rodeo without a license. Pulled pork sliders that weren’t stored at the appropriate temperature were found to be the culprit.

“Lab samples sent to the Colorado Department of Public Health and Environment came back positive for Clostridium perfringens – a leading cause of foodborne illness,” the county said in a statement. “The illness is contracted from consuming large amounts of the bacteria, creating a toxin in the intestinal tract causing abdominal cramps and diarrhea.”

No one died from the food poisoning. Boebert refused to comment on the incident at the time.