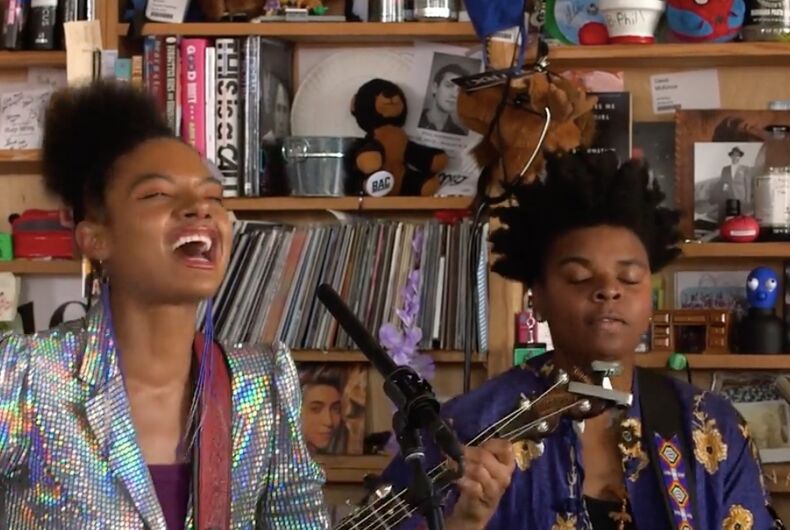 Throughout the series’ large backlog, five performances stand out as especially queer, either due to the musicians’ identities or the defiant queer passion of their work.

Russell – a longtime Grammy-nominated queer musician who has played in at least four different bands – released her first solo album, Outside Child, in 2021. About a year after its release, she brought a six-piece all-female band to NPR’s series, a group she called a “circle of goddesses” and a “rainbow coalition of the loving,” to play some of her transcendent new tunes.

The band’s performance has spiritual, magical, and healing qualities as they sing about transcending childhood abuse and eventually finding a powerful, loving community of feminist music makers. It’s hard to watch the video and not feel uplifted.

Before the final song, Russell says, “We are not alone. We are not what we have lost. We are more than the sum of our scars. We are the dust of the stars. We are the arc of art. We are the love in our hearts. We lift each other up. And we are at the beloved community every single time we choose to be…. And I hope you’ll lead with empathy and I hope you’ll lead with love because they are not weaknesses – they are superpowers.”

Performers from the very queer Pulitzer Prize-winning Broadway musical joined NPR to sing songs about what it’s like to “travel the world in a fat, Black, queer body… in a world that chews up and spits out Black queers on the daily.”

Michael R. Jackson, the Broadway musical’s author, appears after the first song. He explains that his self-referential musical follows Usher, an aspiring but conflicted Black queer playwright who recounts his familial and sexual experiences while working as an usher for a theatre performing The Lion King musical. Usher’s attempts to develop his voice are aided and impeded by six accompanying voices in his head who play various people in his life.

A Strange Loop snagged 11 Tony Award nominations, including ones for Best Musical, Best Actor, Best Director, Best Scenic, Lighting and Sound Design, as well as a history-making nomination for L Morgan Lee, the first-ever out transgender actress to receive a Tony Award nomination. She was nominated as Best Featured Actress for her role as Thought 1.

For his concert – held at the start of Latinx Heritage Month – the young bisexual R&B singer was joined in NPR’s offices by Las Mariachis Lindas, a mariachi band.

Though his songs have a somewhat sad tone – a common flavor of Latino music – they’re splendid. His second song, an English-language song called “Evergreen,” is a heartfelt ode about pining for an unrequited man who is dating a woman.

Apollo croons: “You know, you made me hate myself. Had to stop before I break myself. Should’ve broke it off to date myself. You didn’t deserve me at all.”

In 2019, the Anchorage, Alaska-based musician beat out 6,000 other musicians to win the annual Tiny Desk contest.

Christopherson impressed judges with “Erase Me,” a song about his experience as a transgender man coming to terms with the power of his voice.

In his Tiny Desk performance, his songs have a stripped-down, lo-fi, and confessional quality that really centers his voice and experiences.

The Lebanese band Mashrou’ Leila recorded their Tiny Desk concert the morning after the 2016 mass shooting at the Pulse nightclub in Orlando, Florida. To commemorate the tragedy, the band rearranged their setlist by first performing “Maghawir” (“Commandos”), a song about two nightclub shootings at Lebanese bars – a rare occurrence in Lebanon.

During the NPR concert, the band’s out gay singer and lyricist Hamed Sinno says that gender figured into the shootings. The band also plays “Kalaam” (S/He), a song about how language shapes gender perception. While both songs are in Arabic, their emotion comes through.

Notably, this band made international headlines one year later in September 2017 when seven of their fans were arrested at their concert in Egypt under charges of “promoting sexual deviancy” for displaying rainbow flags. The arrests illustrate the remarkable position the band has as a voice for a persecuted Middle Eastern minority.

Though Lizzo says she “leans heterosexual,” the big name and big-bodied ally absolutely slayed her concert behind what she deems a “tiny tiny ass desk.”

Lizzo sings three songs from her new album – “Cuz I Love You,” “Truth Hurts,” and “Juice” – and also provides refreshingly inclusive and hilarious running commentary on her songs.

After a song about heartache and the end of a relationship, she asks the audience, “You f**kboi free too? F**kgirl free? F**them, f**they free? It’s an amazing place to be when you so free, am I right?” The audience laughed, and she then points to an audience member off-screen, and says, “I like you girl with the middle part… and you, y’know. My girlfriend.”

The above musicians can’t possibly encapsulate the breadth of queer musicians who have played in the NPR Tiny Desk series. Other notable LGBTQ+ standouts include Owen Pallett, Brittany Davis, Declan McKenna, King Princess, Meshell Ndegeocello, SAD13, and Rostam Batmanglij, to name a few.

Couple awarded almost $150,000 after severe anti-gay bullying at the restaurant where they worked