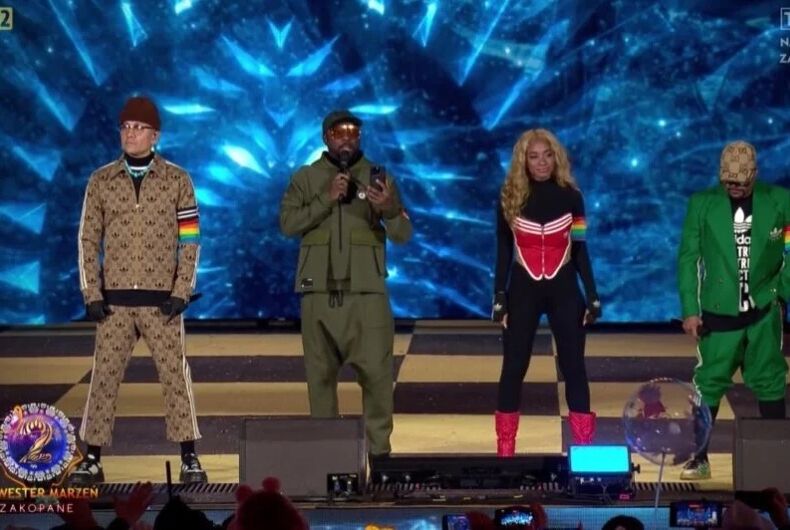 All four members of the pop group The Black Eyed Peas angered anti-LGBTQ+ politicians in Poland by wearing rainbow armbands during a live TV New Year’s Eve performance broadcast throughout the country.

While performing on the TVP channel’s “New Year’s of Dreams” show, the group’s frontman Will.i.am spoke against discrimination faced by the LGBTQ+ community and other groups. The band’s performance was seen by an estimated 8.3 million viewers.

During the broadcast, TVP presenter Tomasz Kammel said onstage that every aspect of the event was pre-planned and approved by broadcasters, “including every element of [performers’] outfits.”

At the start of 2020, PiS began a push to declare regions across the country as “LGBT-free zones” in an attempt to remove LGBTQ+ “propaganda” from the public as a form of “Western decadence” that “threaten[s] our identity, threaten[s] our nation, threaten[s] the Polish state.” Both the U.S. and the European Union condemned the zones as violations of human rights.

Will.i.am responded to Warchol’s tweet, writing, “#WHEREStheLOVE??? Unity, tolerance, understanding, oneness, respect, diversity & inclusion…THATS LOVE…people are people & we should all practice to honor & love all the different types of people on earth & learn from them…I LOVE YOU your country…”

#WHEREStheLOVE???
Unity, tolerance, understanding, oneness, respect, diversity & inclusion…THATS LOVE…people are people & we should all practice to honor & love all the different types of people on earth & learn from them…I LOVE YOU your country… https://t.co/P2MmKewLwV

Warchol responded by asking the performer why he didn’t “boycott the Qatar World Cup over [the] country’s treatment of women, migrants, and the LGBTQ+ community?”

“You sold principles for profit,” he wrote. “Hypocrisy.”

Will.i.am responded, “We went to these places to spread LOVE…why boycott when you can go directly to the source that needs to be inspired and try your hardest to inspire them and spread LOVE…it’s called #LOVE.”

Will.i.am simultaneously live-streamed his New Year’s Eve performance through his social media, holding his cameraphone while speaking and singing to the audience, his rainbow armband clearly in view. He even continued speaking to his live-stream viewers after he went backstage.

“Poland is an awesome country,” he continued. “Never forget your heart, purpose, and standing together when people need a voice, when people can’t be there to speak for themselves…. Let’s pray for them, send them positivity, uplift them as we get ready to enter into this new year 2023.”

Former Spice Girls star and LGBTQ+ ally Melanie Chisholm had initially planned to perform for Poland’s New Year’s Eve broadcast, but declined, citing “issues that do not align with the communities I support.”

In November 2022, the Supreme Administrative Court of Poland ruled that the country could potentially recognize same-sex marriages of Polish citizens that were performed in other countries, even though the country itself still doesn’t perform marriages between two people of the same sex.