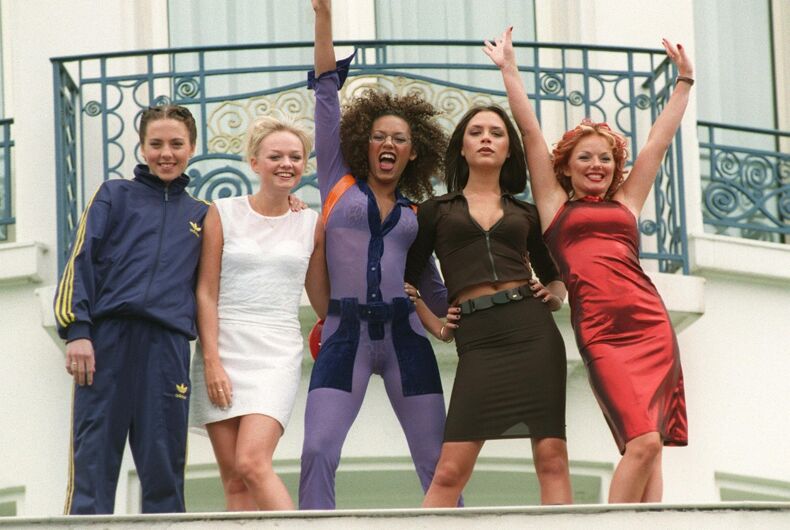 The 1990s-era British pop group Spice Girls used to regularly speak out for “girl power.” But one of the group’s former members recently proclaimed that the group stood for “gay power” as well.

Melanie Chisholm, who performed in the group as Sporty Spice, made the claim while accepting an honorary gay award on October 12 from the British gay magazine Attitude.

“The Spice Girls were about embracing individuality,” Chisholm said. “Everybody was invited into our gang. It wasn’t just Girl Power, it was Gay Power.”

“All the Spice Girls have always been aware of the support from the LGBTQI+ community” she said in a recent interview with Attitude. “We’ve never taken it for granted. Back then, it was very apparent we had many young gay male fans, including some who hadn’t come out or fully understood who they were. We really quickly wanted to change tack, from screaming about Girl Power, to being about inclusivity.”

She had previously said, “As a Spice Girl, it’s all about being who you are. It’s about individuality. It’s about celebrating our differences, but coming together to be strong. That’s what the LGBTQ+ community can be. No two people are the same. It’s so wonderful that you can just truly be yourself.”

Chisholm has spoken in favor of LGBTQ inclusion and transgender rights and has also collaborated with the London-based drag collective, Sink The Pink. In 2021, she also received a “Celebrity Ally” award at the British LGBT Awards.

Gay fans embraced the Spice Girls as a group of strong, bold women who overcame sexism in the music industry to create tunes that celebrated diversity, unity, and living authentically. However, Chisholm (who regularly dressed in tracksuits and other sporty apparel) said that she regularly heard “anti-gay remarks from tweens and parents” over her tomboy image.

Even after the group disbanded, she was met with comments like, “There’s a reason Sporty Spice is the only one of them without a fella!” – a line featured in the popular movie Bend It Like Beckham. Additionally, someone asking, “So is she finally coming out?”, was the top comment on a news story about her book launch party.

She once said it was rude to stereotype her as lesbian because of her appearance, but she also said she didn’t want to people to think she thought there was anything wrong with being gay.

In her recently released memoir, The Sporty One: My Life as a Spice Girl, she wrote, “Here’s the thing with the lesbian rumors (which people still love to ask me about today). I had zero problem with people thinking I was gay, it’s that it’s no one’s business who’s gay or not gay, or who’s bisexual, pansexual, asexual, heterosexual, and so on. If I was gay, so what? It’s not a bad thing, it’s a brilliant thing.”

In the memoir, she also celebrated the fact that people are now questioning gender roles and expectations, stating, “Our ideas around gender… based around old-fashioned and inherited ideas from way back when… are outdated and wrong.”

Chisholm has spoken openly about her depression, eating disorders, body dysmorphia, and the sexual assault she experienced before the Spice Girls’ first live concert in Istanbul. She hopes her voice will empower others to speak out and seek help over similar experiences.

In her interview with Attitude, Chisholm criticized FIFA, the governing body which oversees international professional soccer, for agreeing to hold its 2022 World Cup competition in Qatar, a country where consensual homosexual acts are punishable by death.

“It’s greed, isn’t it?” Chisholm said. “They can try and spin it that they’re there to make change, that sport can make change. But it’s bullshit, it’s about money…. It’s hard to get fully behind it when you know where the money’s coming from.”

The country has promised that LGBTQ foreigners will be welcomed at the World Cup, which kicks off November 20.