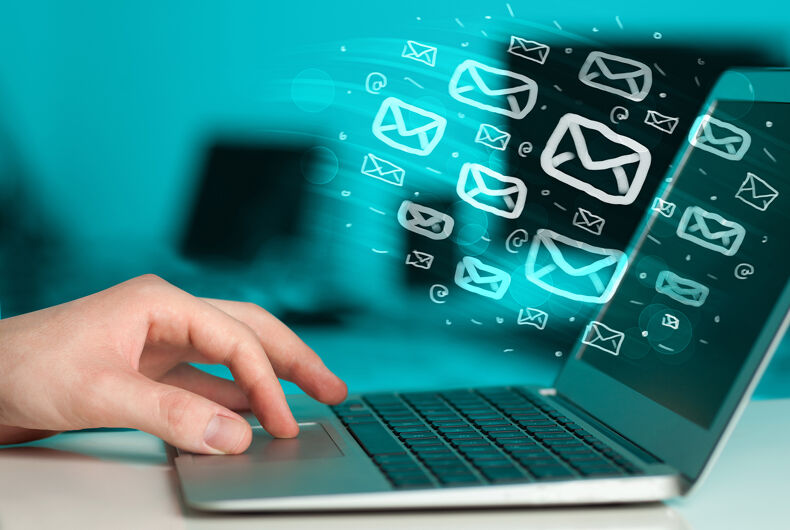 2022 brought unprecedented attacks on LGBTQ+ people, both in state legislatures and on social media, but it also brought some moments of hope as people fought back against the hatred.

This post is for LGBTQ Nation’s fans, a look behind-the-scenes: the 12 stories from 2022 that you all clicked on the most.

12. TV reporter had the best response to a viewer who mocked trans Jeopardy champ Amy Schneider

Amy Schneider’s winning streak on Jeopardy! was a welcome respite from the mounting attacks on transgender people early in the year.

And her success gave people a chance to educate one another, an opportunity Curt Autry of NBC 12 in Richmond, Virginia took when he received a transphobic email from a woman named “Gretchen.”

“Dear Gretchen, we’ve never met, so I don’t know you – but since you approached me as ‘Gretchen,’ I assume that’s how you like to be addressed, I feel no need to peek in your panties to verify it,” he responded. “I’ll call you what makes you comfortable, the same goes for Amy. And that has nothing to do with my I-Q or how ‘woke’ I am, it’s just a simple matter of respect.”

11. Ron DeSantis replaced elected attorney with one bringing back “Biking while Black” policy

Florida Gov. Ron DeSantis (R) got national attention this past year for his anti-LGBTQ+ policies, the most famous being his Don’t Say Gay law. This brought attention to some of his other actions, including how he forced out a locally elected and Democratic state attorney, Andrew Warren, in part because of Warren’s support for transgender children.

DeSantis replaced Warren with a far-right lawyer who wanted to bring back a policy that the NAACP-Hillsborough said “perpetuate[d] systemic racism within our community.” The policy that allowed officers to stop and ticket cyclists for minor infractions like taking their hands off handlebars was subject to a 2016 Department of Justice investigation that found that 75% of cyclists stopped under the law in Tampa were Black.

10. Herschel Walker asks what a pronoun is: “Pronouns? What’s a pronoun?”

Pretending not to know what pronouns are – or claiming words that are not pronouns as one’s pronouns – has become a staple on the far-right in order to mock transgender people.

But one Republican this year appeared to actually not know what pronouns are, and that candidate was U.S. Senate candidate from Georgia and former NFL player Herschel Walker.

“Pronouns? What’s a pronoun? I can tell you, a grenade don’t care about their pronouns,” he said at a campaign event, making fun of transgender people serving in the military. Walker himself never served in the military.

In August, news broke that a GOP candidate for Wisconsin’s state assembly from the Green Bay area filed a complaint with police when he got allegedly blackmailed by a man who had video of him performing oral sex on a man.

“I was the victim of a crime, but I’ve put the matter behind me and I’ve focused on my faith,” Schmidt said at the time. “I’m a strong conservative and Christian, but there was a brief moment I struggled with my sexuality.”

Schmidt won his election in November.

Rep. Lauren Boebert (R-CO) wears her religion on her sleeve, but her understanding of Christian theology is often… bizarre.

In June she appeared to blame the crucifixion on Jesus Christ, saying that it wouldn’t have happened if he was armed.

“The little Twitter trolls, they like to say, ‘Ah Jesus didn’t need an AR-15! How many AR-15s do you think Jesus woulda had?’” Boebert said at a Christian center event in Colorado Springs.

“Well, he didn’t have enough to keep his government from killing him, so…” she joked. The crowd laughed.

The inevitability and the importance of Christ’s death appear to not count for much in Boebert’s understanding of her religion.

7. Looks like Donald Trump may have handed the Senate race in Georgia to Democrats again

LGBTQ+ people were waiting on the edges of their seats for the results of the Georgia Senate race to see whether Democrats would gain a seat in the Senate, making progressive legislation and confirmation of President Joe Biden’s appointments easier to pass.

The idea that Donald Trump – who helped terrible candidate Herschel walker win the GOP primary – may have unwittingly helped Democrats get that extra seat was advanced by LGBTQ Nation columnist John Gallagher.

And Sen. Raphael Warnock (D-GA) won reelection in the runoff election at the beginning of December.

6. Mom gets applause after ripping book-banning parents apart in school board meeting speech

Conservative activists spent the better part of this past year calling for LGBTQ+ books to be banned from school libraries all over the country, arguing that they’re “pornography” and “grooming” children into becoming gay or trans themselves.

One mom who stood up to the absurdity of the claims got a lot of attention online.

“Just because you can get up at every meeting and rant and rave does not give you authority over my child’s education,” said Adrienne Quinn Martin at a school board meeting. “The speakers speaking about what great Christians they are? Great. Go tell your pastor. Our schools are not your church.”

The room erupted in applause for her bold speech.

When Anne Heche was hospitalized after a car accident earlier this year, her ex-girlfriend Ellen DeGeneres kept mum until she was questioned by a reporter in a parking lot about whether she reached out to Heche’s family.

“We’re not in touch with each other, so I wouldn’t know,” Ellen said.

“It was quite a dangerous accident that happened, wasn’t it?” the cameraman asked.

“Sure was,” Ellen replied before continuing on to her car.

Heche passed away in August.

Justice Ketanji Brown Jackson’s confirmation to the Supreme Court was one of the biggest stories of the year, and her direct answers to Republican senators earned her praise from the left.

When Sen. John Cornyn (R-TX) ranted at her confirmation hearing about how LGBTQ+ people’s right to get married somehow violates religious freedom – apparently violating religious people’s ability to restrict marriage to one man and one woman – she had a pithy response.

“Well, senator, that is the nature of a right,” Jackson responded dryly, “that when there is a right, it means that there are limitations on regulation, even if people are regulating pursuant to their sincerely held religious beliefs.”

2022 saw an uptick in anti-LGBTQ+ rhetoric from the right, and one person running for Oklahoma’s state house shocked the country with moral equivocation about violence against LGBTQ+ people.

“So, just to be clear, you think we should execute homosexuals (presumably by stoning)?” someone asked him in the comments on a Facebook post.

Sen. Cynthia Lummis (R-WY) decided to bring up her opposition to transgender equality while giving a commencement speech at the University of Wyoming in May.

“Even fundamental, scientific truths such as the existence of two sexes, male and female, are subject to challenge these days,” Lummis said as students booed. She was clearly rattled by the reaction.

“You know I…. And I challenge those of you-” she said before trying to explain away her previous statement: “I’m not making a comment on the fact that there are people who transition between sexes.” She got more boos.

The university later apologized to students for the senator hijacking their graduation with hate.

1. Fox News was so scared of what Karine Jean-Pierre was saying that they cut off the video

In May, out political powerhouse Karine Jean-Pierre took over as White House Press Secretary after Jen Psaki resigned. And both as a lesbian Black woman and as the face of the Biden administration, she has taken an enormous amount of criticism from the right ever since, much of it based on deceptively edited clips.

In one notorious instance in October, Fox News’s Peter Doocy asked her a question about gas prices. Fox host Jesse Watters then showed the clip of Doocy asking the question before cutting her off and said, “We wanted to show you the rest of her answer but she didn’t make any sense.”

The problem? Her answer made perfect sense, it just didn’t agree with Fox’s narrative on gas prices leading up to the election. Someone mashed up video of Watters saying that Jean-Pierre’s answer made no sense with video of her actual answer, which made sense.