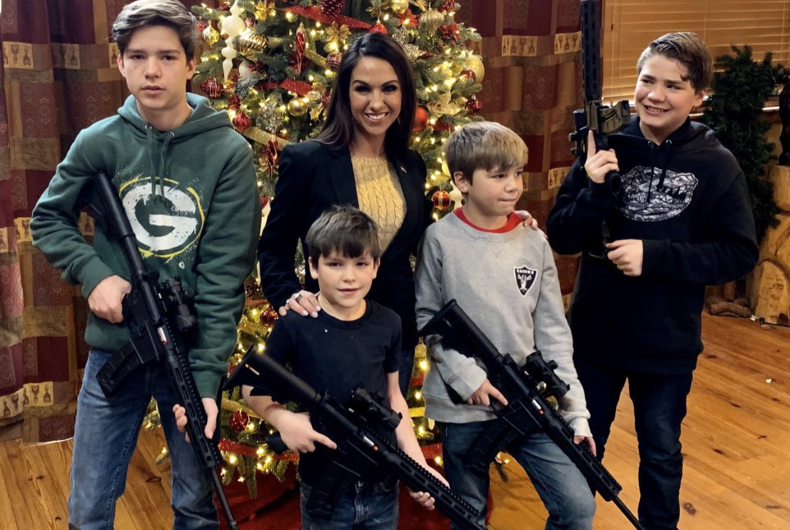 Rep. Lauren Boebert and her children in a Christmas photoPhoto: screenshot

AR-15s have gotten a bad rap lately due to their popularity among mass shooters, including the shooter in the recent Robb Elementary School massacre in Uvalde, Texas where a gunman killed 19 children and two adults.

So Rep. Lauren Boebert (R-CO) is standing up for the semi-automatic weapon’s honor: she claims that Jesus only died because he didn’t have enough of them, effectively victim-blaming the Messiah.

“The little Twitter trolls, they like to say, ‘Ah Jesus didn’t need an AR-15! How many AR-15s do you think Jesus woulda had?'” Boebert said at the Charis Christian Center in Colorado Springs this past Saturday during their Family Camp Meeting event.

“Well, he didn’t have enough to keep his government from killing him, so…” she joked. The crowd laughed.

Lauren Boebert claims Jesus “didn’t have enough [AR-15s] to keep his government from killing him.” pic.twitter.com/dTC9O7ZFDz

She rose to some national attention on the right in 2019 by confronting then-Democratic presidential primary candidate Beto O’Rourke about his proposed buy-back program for AR-15s. She has made gun ownership a central issue for her political campaigns.

So it was no surprise that she brought up guns and specifically AR-15s multiple times in her speech at the Christian event.

Then she prayed for the death of President Joe Biden.

“I do want you to know I pray for our president,” Boebert said. “Psalm 109:8 says, ‘May his days be few and another take his office.'”

Lauren Boebert’s prayer for President Joe Biden: “May his days be few.” pic.twitter.com/1ft1LoYqnK