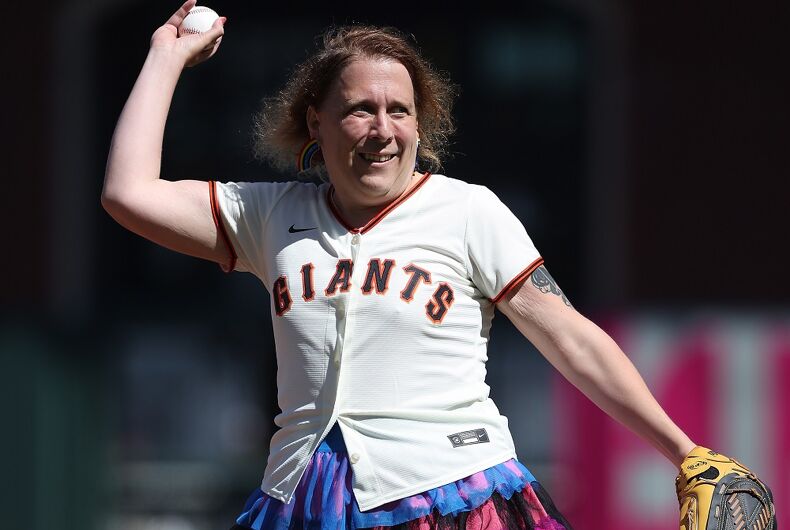 Who says chivalry is dead?

“I want to make a correction from what I watched yesterday on the Fox broadcast,” Kuiper alerted NBC Sports Bay Area viewers at the bottom of the 3rd inning.

While most fans may not have noticed, Fox Sports, which carried the game regionally, substituted Schneider’s live first pitch with a ceremonial toss by NASCAR driver Kurt Busch, recorded two days before at a Giants-Rockies game, also at Oracle Park.

Schneider, an Oakland resident who triumphed in 40 consecutive Jeopardy! episodes, is the show’s winningest female player. She’s also the first transgender woman to qualify Jeopardy!‘s Tournament of Champions and took the mound Saturday as part of Pride Day at Oracle Park.

Fox Sports refused to show Jeopardy champ Amy Schneider throw the first pitch on Pride Day during their coverage of the Giants/Dodgers game. Schneider is a trans icon with the 2nd longest winning streak in Jeopardy history. Here's a clip of her pitch:pic.twitter.com/wgopQZOak1

Fox announcers used Busch’s throw at Oracle to remind viewers the network was televising Sunday’s NASCAR race at Sonoma Raceway north of San Francisco. They didn’t mention Pride Day or Schneider’s appearance, instead representing Busch’s pitch as “happening now” while erasing Schneider and her trans identity from the Fox coverage.

“Actually, she had a pretty good arm, too,” Krukow responded

“That’s what I heard,” Kuiper said.

“I was impressed,” Krukow responded. “Plus, she could tell you the weight of the baseball, how many seams were on it and what country it was manufactured in.”

Fox Sports explained the Busch/Schneider substitution this way: “On Saturday, as part of a promotional package for the weekend’s NASCAR race in northern California, we aired a taped first pitch of famed NASCAR driver Kurt Busch. This promotion was in no way meant to overshadow the ceremonial first pitch for the game as it is not routine for us to air.”

The internet had some other theories, and plenty of praise for Kuiper, while the Jeopardy! champion was typically non-plussed.

Good on Duane Kuiper for calling out FOX on the #SFGiants telecast https://t.co/h0P4jB0DmD

Awesome that Duane Kuiper corrected the record and shouted out Amy Schneider for throwing the first pitch yday. #SFGiants