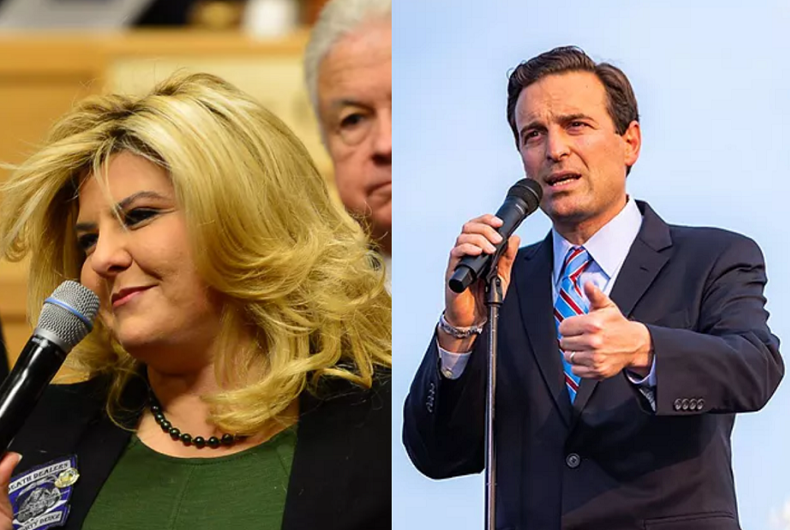 Nevada Republicans Adam Laxalt and Michele Fiore both won their primary races on Tuesday. Both have a dismaying track record of attacking the LGBTQ community.

Former state attorney general Laxalt had embraced lies about the 2020 election and secured the endorsement of former President Donald Trump. He’ll now go on to face incumbent Democratic Sen. Catherine Cortez Masto in a race that could determine whether Democrats retain control of the Senate.

Related: GOP Senate candidate Adam Laxalt has been attacking LGBTQ equality for years. He could win.

In April, a coalition of LGBTQ groups spoke out about Laxalt. “Adam Laxalt has made a hateful anti-LGBTQ+ activism a cornerstone of his political career,” said Andrew Wade, head of Nevada-based Silver State Equality.

In late March, Laxalt criticized opponents of Florida’s “Don’t Say Gay Law” on the Breitbart Podcast. “Why are they fighting — I should say — against this bill if it were not because they want to be able to indoctrinate kids at these ages?”

In 2018, HRC Nevada pointed out that Laxalt had an “obsession with attacking the LGBTQ community.” This obsession included a 2014 statement against same-sex marriage equality and a 2010 op-ed speculating that, “senior officers and non-commissioned officers will have to, under the color of Military Law, proactively endorse and eventually foster homosexuality.”

Las Vegas City Council member Fiore will now face incumbent Zach Conine (D) in her race to become Nevada’s state treasurer. Fiore has expressed support for the LGBTQ community, and her own mother is an out lesbian. But recently, she has repeated transphobic misinformation about the Uvalde school shooting at campaign events.

“He was also on a lot of different medications from transgendering. So, his mind was quite defective,” Fiore said of the shooter earlier this month. The false claim that the Uvalde shooter was transgender had been circulating online and had been repeated by high profile Republican lawmakers Paul Gosar (R-AZ) and Marjorie Taylor Greene (R-GA).

In South Carolina, meanwhile, Mark Burns lost his bid to become the GOP’s candidate for the state’s 4th Congressional District. The Republican pastor had campaigned against so-called “grooming” and promised to jail parents who support their LGBTQ children, claiming they are a national security threat.

“I vote to make sure that those parents be held for child abuse,” Burns said on rightwing The Stew Peters Show. “There is no such thing as trans kids, there are only abusive parents who are pushing that evil, evil sexual orientation onto their child’s mind.”

Saudi government cracks down on sale of rainbow toys