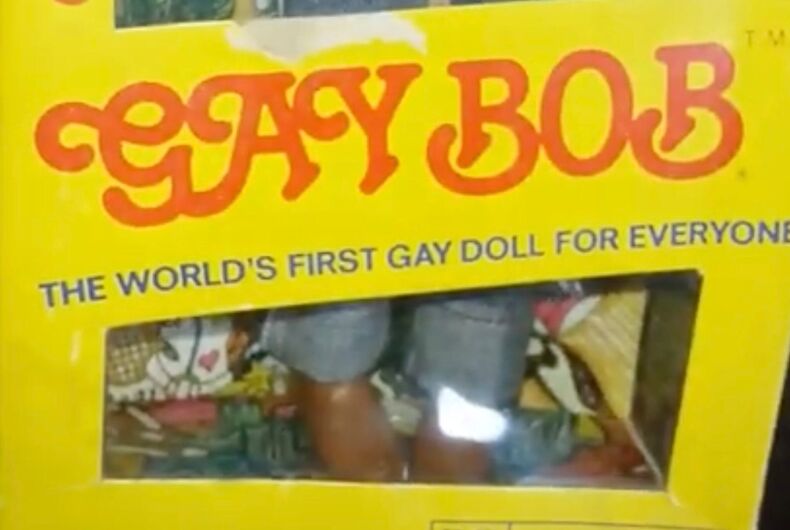 Before the outcry against Mattel’s “gender-neutral” dolls, and before the collecting of OOAK non-binary “art pieces” and the gifting of glammed up drag icons, there was Bob. “Gay Bob” was the world’s very first openly homosexual doll and in 1977, he began shipping to homes across the nation in his own cardboard closet.

Gay Bob was no mere child’s plaything. While Barbie and Ken, his younger neighbors with their mutually rock-hard and forever perky pectorals, were molded in the image of young sexual maturity, Gay Bob was clearly a grown-ass man. His pronounced nasolabial folds, sculpted chest, and blonde dye job suggested a doll in its 40s, full of the wisdom of self-actualization.

Unlike Ken, he also had a complete set of anatomically correct genitals. Bob was a doll that knew what he wanted – and that was to live authentically while teaching other people, queer and straight, what it meant to be “out.”

We know this because his mission statement was printed on the box:

“Hi boys, girls and grownups, I’m Gay Bob, the world’s first gay doll. I bet you are wondering why I come packed in a closet. ‘Coming out of the closet’ is an expression which means that you admit the truth about yourself and are no longer ashamed of what you are… A lot of straight people should come out of their ‘straight closets’ and take the risk of being honest about what they are. People who are not ashamed of what they are, are more lovable, kind, and understanding. That is why everyone should come out of “their closet” so the world will be a more loving, understanding, and fulfilling place to live. Gay people are no different than straight people. If everyone came out of their closets, there wouldn’t be so many angry, frustrated, frightened people… It’s not easy to be honest about what you are; in fact it takes a great deal of courage. But remember, if Gay Bob has the courage to come out of his closet, so can you!”

Is this great copywriting? No, not at all. Gay Bob, like most of us, needed an editor. But his message was more important than his delivery.

Bob was the brainchild of advertising executive Harvey Rosenberg, head of the marketing agency Gizmo Development. At some point in the mid-1970s, Rosenberg allegedly became deeply affected by the women’s liberation, civil rights, and LGBTQ+ rights movements, stating in interviews that Gay Bob was developed in part to help free all men from traditional gender expectations.

While he did not personally identify as gay, Rosenberg said in interviews that “we had something to learn from the gay movement, just like we did from the black civil rights movement and women’s movement, and that is having the courage to stand up and say, ‘I have a right to be what I am.’”

Rosenberg sunk ten thousand dollars of his own money into the development and production of Gay Bob, who was sold via mail order and sex shops to adult collectors. Standing “a big 13 inches tall (wow!)” – to quote his ads directly – and sporting a gold chain, partially unbuttoned plaid flannel, cuffed denim, and cowboy boots, he came with a luxury clothing catalog and leather man-bag. He bore a striking resemblance to Robert Redford in Brubaker, and sold 2000 units swiftly. The project cost Rosenberg several business relationships, but the consequence didn’t deter him. He had another 10,000 dolls manufactured while placing high camp magazine ads for his leading man.

“He comes dressed in mucho macho plaid shirt, blue jeans that open with a smart snap to reveal his private parts, boots and (naturally) one earring! Barbie and Ken…move over, GAY BOB IS HERE!” one promotion announced alongside Bob’s $19.50 price tag.

While the gay cliches – one earring! a purse! sexual double entendres! – and campy sales tactics may have gotten Gay Bob roasted in the 2020s as “problematic,” his combination of tongue-in-cheek presentation and earnest messaging landed fairly well in the late-70s.

Less than a decade had passed since the Stonewall Riots made headlines, and Harvey Milk’s California political campaign was about to come to its tragic conclusion. Conservative activist Anita Bryant’s Save Our Children organization was seeding America with what would grow our current “gays are grooming your children” propaganda crisis. Adults fatigued by the intensity of the social inequity dialogue genuinely appreciated the humor injected into Gay Bob, as well as the tenderness of his “everyone would be kinder if we just loved ourselves openly” message.

Save Our Children predictably lost their minds over Bob, labeling him a weapon to “put the homosexual lifestyle, which is a deathstyle, across to the American people.” But since the dolls were neither marketed toward nor sold to actual human children, few cared about the disingenuous pearl-clutching.

Gay Bob even received Esquire magazine’s “Dubious Achievement Award” in 1978, and his own Time magazine feature.

Sadly, it would be another 20 years before Bob had other dolls to meet up at the Dream Bar with. Rosenberg never produced any other dolls, and it wasn’t until 1997 that Totem International designed and marketed their own “out and proud gay dolls,” a trio of leather studs named Billy, Carlos, and Tyson.

Despite Bob’s best efforts to appeal to our better angels, it’s still hard out there for a queer doll. The slightest suggestion that one of the famed American Girl dolls could have been a little gay sent consumers into a tizzy in 2022, and while millennials were more enthusiastic about the debut of some lesbian Bratz in 2020, rainbow Legos were received by some conservatives as evidence of the “shameful brokeness” of queers everywhere. Gay Bob surely hoped more progress would have been made in the 40+ years since he and his closet started advocating for courage and kindness.

That said, he and Rosenberg did bravely attempt to start a necessary conversation and paved the way for the more inclusive, albeit totally inanimate, objects continuing to subversively push that conversation today.