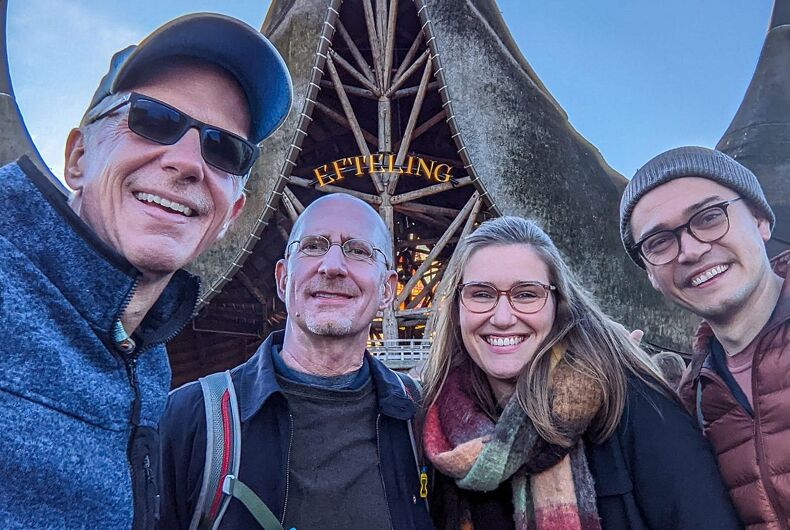 Regular readers know I love amusement parks. But they also know I’ve come to hate Disney, creator of the world’s most popular amusement parks, with the passion of a thousand suns.

Here’s what I wrote about the Disney parks earlier this year:

[With their new ticket prices and app add-ons, Disney has created] two different park experiences: one for the rich, who can pay to bypass the endless, soul-crushing lines, and a different, much worse experience for everyone else.

While in the Netherlands recently, my husband, Michael, and I visited Efteling, which is the second most-visited theme park in Europe, after Disneyland Paris.

It turned out to be everything Disney used to be.

That rumor probably isn’t true, but when the Disney corporation was planning Disneyland Paris, which opened in 1992, they definitely consulted with the folks at Efteling for tips on how to appeal to European audiences.

And when Efteling began introducing higher-tech rides like Symbolica, which opened in 2017 at a cost of €35 million, they consulted with the experts at Disney. I don’t speak Dutch, and I didn’t know the story that Symbolica is based on, so the ride made absolutely no sense whatsoever to me. But it looks fantastic.

(I’ve since learned the story involves a visit to the king’s palace, and a jester named Pardoes – Efteling’s mascot – shows you all the hidden parts of the castle.)

Whatever the truth about Efteling’s former relationship with Disney, it’s past time for the folks at Disney to consult with Efteling again, because they could learn a lot.

These days, the Disney parks are crazy expensive, and most of their future plans involve leaning hard into wildly over-exposed franchises like Frozen and the Marvel properties. As for the crowds, well, the new-ish Flight of Passage ride at Disney’s Animal Kingdom was built to accommodate lines of up to six hours.

Meanwhile, much of Efteling is also still forest, which is soothing and lovely.

Admission is €41 per day (or around $43 USD), compared to the Disney parks which use dynamic pricing but are now generally somewhere between $125 to $189 a day, which blows my mind just to type.

Better still, while Efteling has “single-rider” lines on many attractions, there is no pure-evil process by which rich people are able to pay more money to avoid the lines.

How’s the park itself?

As with many older parks, Efteling began modestly, with something called the Fairy Tale Forest. This part of the park still exists, though in a greatly updated form.

The park has since expanded into different “realms”: Reizenrijk (or Travel), Marerijk (or Fairy), Ruigrijk (or Adventure), Anderrijk (or Other). In 2017, the center of the park officially became the Fantasierijk (or Fantasy) realm, and it includes a pretty spectacular light, water, and music show that even includes bursts of real fire.

The premier rides are mostly top-notch, but I especially enjoyed the Flying Dutchman, which starts out as a Pirates of the Caribbean-like dark ride, including pirate themes, but then halfway through, it turns into a steel roller-coaster that ends up splashing down in the nearby lagoon.

The ride’s most ingenious aspect may be the fact that, despite an impressive splash-down, none of the riders actually get wet – something that was greatly appreciated in the cold November weather of our visit.

There are four other coasters: one wooden, two steel, and one indoor. The indoor one, Vogel Rok, is a jerky bust, although it has a cool theme involving the giant “rocs” of legend.

But the single best ride in the park is probably the Baron 1898 coaster, which tells the story of a cursed gold mine and involves a plunge down into a “mineshaft.” In reality, the ride is a rare “dive coaster” and includes an impressive, near-vertical drop of almost forty meters into a smoke-filled pit.

The park also includes Piraña, which is a more traditional “splash” ride. When it opened in 1982, it was Europe’s very first river rapids ride, and its ancient Mayan temple design still looks impressive. But it was clear from a glance that riders get soaked on this ride, and so, given the November chill, we stayed far away.

The other top dark ride is Fata Morgana, which is a Pirates of the Caribbean-like experience inspired by 1001 Nights and an over-the-top celebration of Arabian culture. Like the Disney pirate ride, it’s older – and a bit dated in its animatronic technology. But unlike the Disney ride, the sensibility doesn’t look to have been updated either, so its gender and cultural stereotypes are definitely somewhat outdated and offensive.

One of the park’s most famous attractions isn’t a ride at all – it’s the trash cans, which are built in the shape of a character from a Dutch nursery rhyme, Holle Bolle Gijs, who never stops eating. All around the park, he calls out, “Papier hier! Papier hier!” which means “Paper here!” And when you put trash in his mouth, it’s sucked away by a vacuum, and the character makes a very satisfying gobbling sound.

One attraction you definitely won’t see in a Disney park is based on another Dutch fairy tale about a donkey that poops gold coins. The Donkey Lift Your Tail donkey in the Fairy Tale Forest doesn’t literally poop gold, but if you feed it a coin, it will poop out a souvenir fake-gold coin.

The truth is, Efteling isn’t as slick as the Disney parks, and the best rides here aren’t quite as state-of-the-art as the top Disney attractions.

But Efteling restored my faith in amusement parks anyway, in part because I wasn’t surrounded by hordes of people, and I didn’t feel like I was being fleeced at every turn.

I also never felt like I was part of some grand corporate strategy designed to suck me and my money into some vast but increasingly bland media ecosystem.

No, the point was simply to be interesting, imaginative, and fun.

Disney could learn a lot, which is sad, because Efteling really is exactly what Disney used to be.