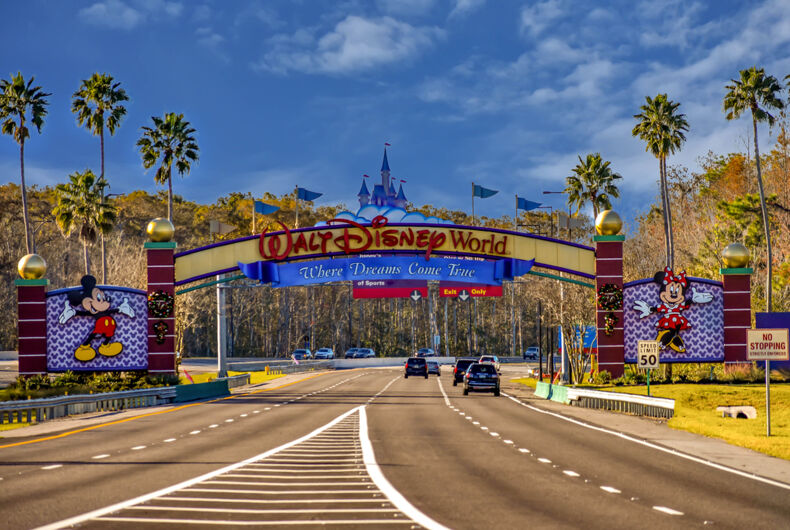 Not long ago, I wrote how much I love amusement parks, including the Disney ones.

I’m a screenwriter, a storyteller, and I especially love when amusement parks tell stories — not just in the rides themselves, but in the overall park experience. I like it when theme parks have actual themes.

Related: Watch this Burger King employee use his “gay powers” to shut down an unruly customer

When Walt Disney opened his first park on July 17, 1955, he was openly and proudly telling a story about America: that it was a place of benevolent nostalgia coupled with an unbridled optimism about the future, especially when it came to technology.

Later, after Walt’s death — and American society evolved — the Disney story changed, becoming less about “progress” and more about celebrating racial and cultural diversity. In the 1970s, the company started eliminating the racist depictions in its park attractions. By the 1990s, it had openly embraced an agenda of diversity, adding new elements to the various attractions — and also to their television and movie programming.

Some of the newest attractions, like Pandora, the World of Avatar, at Disney World’s Animal Kingdom, even openly celebrate indigenous cultures — at least in a big, broad, sanitized kind of way.

But I also wrote how sometimes amusement parks tell stories that the creators of the parks themselves are not even aware they’re telling. I think that’s the case with Disney right now. Unfortunately, they’re telling a story I really hate.

No, not the diversity issue — I’m totally on board with that.

I’m talking about major new policy changes, like Disney’s controversial new Genie app, which replaced the old Fast Pass system that allowed visitors to use a special line at different attractions, bypassing the main one and shortening their wait.

Except, unlike the old Fast Pass, you only have access to the Lightning Lanes if you spring for the Genie+ upgrade — $15 per person per day at Disney World, $20 at Disneyland.

This is all on top of Disney’s regular entrance fees, which rise according to demand. They recently introduced a sixth “peak” tier, which is $164 per person per day. Meanwhile, they’re pricing fewer and fewer days at the bottom $109 tier — only 22 days in 2021.

Meanwhile, Disney recently opened something called Star Wars: Galactic Starcruiser at Disney World — a two-night interactive “experience” that features themed food, lodging, and role-playing, as well as admission to park features. Prices start at an eye-popping $5300 for a family of three.

Disney hotel prices have all risen too — in some cases, dramatically. Pop Century at Disney World is up 73% since 2013, far outpacing inflation. The airport shuttles at all the hotels, which used to be free, now cost $16 per person one-way.

Basic parking at Disneyland costs $35, and $25 at Disney World.

Do I need to tell you that food prices are also way up at the Disney parks, or can you see where I’m going with this?

When Disneyland opened in 1955, admission was one dollar for adults, with another few bucks to pay for admission to the various attractions. Adjusted for inflation, that would cost about $36.76 today. In 2000, admission — which by then included access to all the rides — was $41. That’s $67.32 today.

Okay, sure, the experience is a lot different now than it was back then. In the last decade alone, Disney has spent tens of billions of dollars upgrading their different parks (and cruise ships), and is said to be spending another $24 billion in just the next five years. Expect lots more immersive experiences.

(Despite being a total theme park geek, I’m not especially impressed or excited by much of this, because the new development is focusing heavily on Marvel-related attractions, and extensions of Disney brands, like Frozen, that I think are already wildly over-exposed. The thing I find least interesting about Disney, by far, is the company’s penchant for having a hit — and then exploiting it over and over and over, in a zillion different incarnations, until whatever was enjoyable or interesting about the hit has long since been obliterated.)

And, of course, Disney can charge these prices because people are willing to pay them. The parks are incredibly popular. Disney World alone gets 56 million visitors a year.

When anything is this popular, the price probably needs to rise, if only to keep the crowds down. The parks can literally only handle so many people — and one could make a strong case that the massive throngs that now descend have already negatively impacted the whole experience.

Seriously, who wants to wait in line for an hour or more for any ride, no matter how expensive or spectacular? I remember the last time Michael and I visited a Disney Park, in 2018: by the time we left for the day, the line for Flight of Passage in Animal Kingdom was six hours long.

But there were much better ways for Disney to go about raising prices — ways that could be much more egalitarian and don’t prioritize rich people over everyone else.

After all, Fast Pass was available to everyone — and kept the experience essentially the same for everyone.

That’s the opposite of these new changes, which are primarily about increasing profits for Disney.

First, with these crazy-high prices, they’re saying now only certain people can even aspire to go to a Disney Park in the first place. Lower middle class? Yeah, maybe, if you scrimp and save. The actual poor? Fuhgeddaboudit!

But then they’ve also created all these add-ons that basically create two different park experiences: one for the rich, who can pay to bypass the endless, soul-crushing lines, and a different, much worse experience for everyone else.

After all, these rides only have so much space. Every seat that goes to someone paying for Genie+ or a Lightning Lane pass means there’s one less for everyone else — and so the “regular” line is going to be that much longer.

So much for Main Street U.S.A., amirite?

And Disney now has a financial incentive to keep this insane caste system forever in place: the longer the lines, the more people will pay to bypass them.

When you wish upon a star, your dreams come true — but only if you’re willing to pay an additional fee.

Seriously, who came up with these new park policies, Cruella de Ville?

This is the story the Disney parks are really telling — the one I said I hated: if you have money, you’re considered more important and will get special treatment. And because some people get that special treatment, things will be a lot worse for everyone else.

We’re absolutely not all in this together.

Sadly, this might also be the overarching story about America in general. It’s probably more accurate than the story Disney used to tell about American optimism, or the one they claim to be telling lately about racial and cultural diversity.

That’s part of what’s so frustrating about all of this. What Disney is doing is pretty much in direct opposition to these values of “diversity” and “inclusion” they claim to champion.

Look, if you’re a Disneyphile, and none of what I’m saying here dissuades you from going to the parks, fine.

Me? I’m taking the advice of Jiminy Cricket and letting my conscience be my guide.

For the time being, I’m done with Disney.