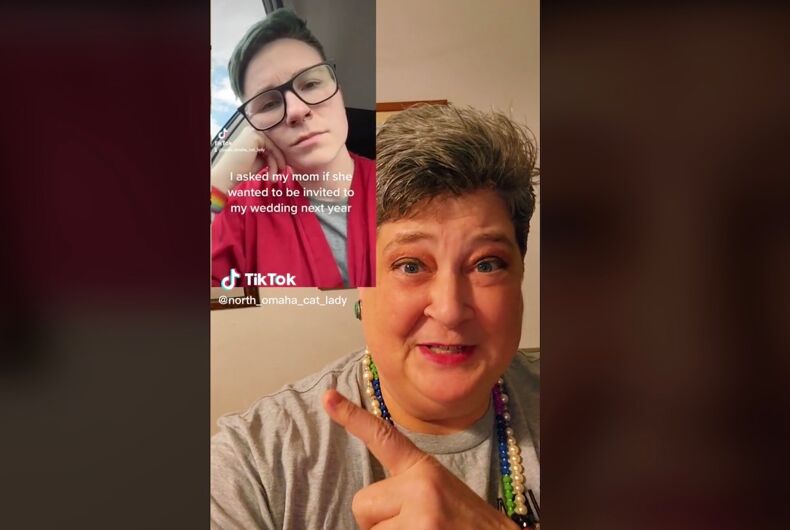 A heartwarming story of LGBTQ+ acceptance and chosen family has gone viral on TikTok after a woman offered to be a stand-in mother for a nonbinary groom whose biological mother refused to attend his wedding.

It began when James posted a video lamenting that his mother would not be attending his upcoming wedding.

“I feel unloved…unwanted,” James wrote in the video. “I feel so sad…all I wanted was her love and support. It’s the one thing I’ll never get.”

♬ When the Party’s Over – Cimorelli

Irey, who is gay and TikTok famous and goes by the name @north_omaha_cat_lady to her more than three million followers, responded with a passionate and irate video railing against James’s mother and expressing her support for him.

“Where and when [is the wedding]?” she said. “Let me know. We will bring aunties and uncles and cousins and sisters and brothers and second cousins thrice removed.”

“If your family is not supportive of you, find a new family. I will stand in for your mother. If you don’t mind having an old fat mother in a muumuu at your wedding I will be there… I will walk you down the aisle. Let me know. We love you. We support you. F**k her.”

♬ When the Party’s Over – Cimorelli

As it turned out, they both lived in Omaha, and the pair actually met up and had ramen noodles together, along with James’s fiancée. It was then they made it official that Irey would be James’ stand-in mom.

“I’m really nervous. I feel like I’m meeting my child for the first time,” Irey said in a TikTok video before they met up. “We’re gonna make their wedding the best wedding there ever was,” she added.

She also posted a video after the meeting, in which she excitedly proclaimed, “I have a son!”

“I have a handsome son named Noah who is getting married to the most wonderful person ever named Bat and I could not be happier. We had such a fun time tonight.”

“Noah, this mama is always gonna be there for you. So, I’m proud of you and I’ll be there at your wedding.”

In an interview with The Independent, James said Irey was one of many moms who reached out.

“I still feel like I don’t deserve it, but I’m so thankful for the overwhelmingly positive response. So many moms have messaged me, sent me cards, and posted kind words.”

In addition to Irey, two other stand-in moms will join Bat’s mother to support the couple at the wedding.

“That’s really all I could ever ask for,” said James. “It’ll be a hard day without my biological mom so it means a lot to me that Rosie will be there.”

The attention on James also led TikTokers to offer free wedding services as well as donations for their honeymoon.

“Someone donated $500 to us for this trip,” James told Insider. “I threw my phone down because I couldn’t believe it. We have almost $900 towards our honeymoon now because of the generosity of people from TikTok.”

Irey added that acceptance was never something questioned in her own family, and she knew she had to do this for James.

“My mother was a conservative Christian and Republican, and she had two gay kids and absolutely adored both of us. Coming out was kind of a non-event because my brother had already come out.”

James also said he hopes his story can somehow help others.

“I want to say, ‘Hey, you’re not alone. What I want to do with my platform is to make people feel less alone. That’s what I stand for and what’s important to me.”

Can you lend a hand? 9 meaningful ways to volunteer for your community