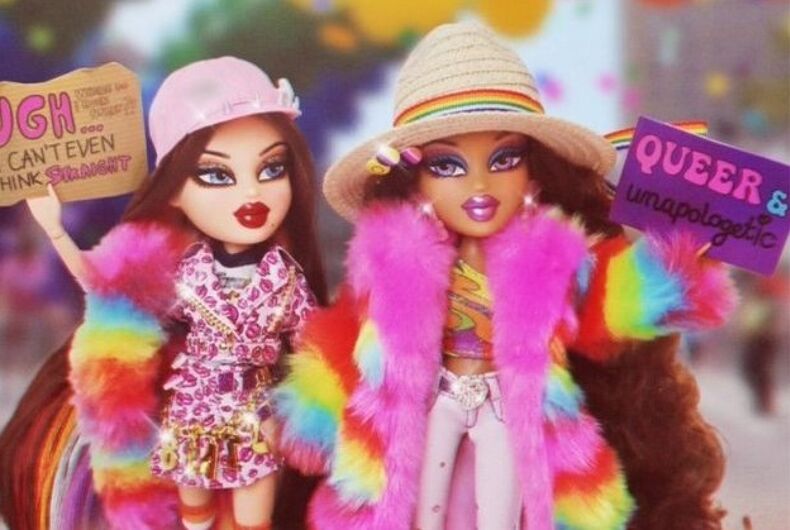 While conservatives rage at Disney and Fisher-Price for acknowledging queer people, Bratz — the popular line of 10-inch fashion dolls — is leaning full into Pride month by unveiling a pair of rainbow-clad girlfriends who are unapologetically queer.

The couple, Roxxi and Nevra, actually debuted as girlfriends during Pride month 2020, but Bratz has brought them back and made them queer-er than ever for 2022. Even better, Bratz’s parent company — MGA Entertainment — has pledged a $25,000 donation to the LGBTQ suicide hotline The Trevor Project.

Roxxi and Nevra, two limited edition dolls that cost $79, come with accessories too — including a pink megaphone, a heart-shaped fan, a mirror ball, and two protest signs that say, “I can’t even think straight” and “queer and unapologetic” — for the Pride event in their fictional hometown of Stilesville.

“This collaboration is a love letter to the LGBTQ+ community, many of whom have been inspired by Bratz since childhood to live their truth,” said Jimmy Paul, the designer who created the girlfriends’ fashions. “My hope is that the collection brings a glimpse of hope and power and serves as a reminder of both the vibrancy of the community and the gravity of LGBTQ+ affairs today.”

Paul is right. While increasing numbers of young people identify as LGBTQ, legislators seem intent on discouraging them by banning queer content from classrooms, keeping transgender athletes off of the sports field and criminalizing gender-affirming care for trans youth. Studies show that such laws and public debates increase mental distress and suicidal ideation in LGBTQ youth.

The designer is also offering an added bonus for fans of the pair. He has made their clothes available for purchase in a ready-to-wear collection. Paul also illustrated the couple’s limited edition box, which is covered in colorful, psychedelic and holographic arch, great for displaying the protesting pair.

Why do humans have butt hair?

What it means to identify as neutrois