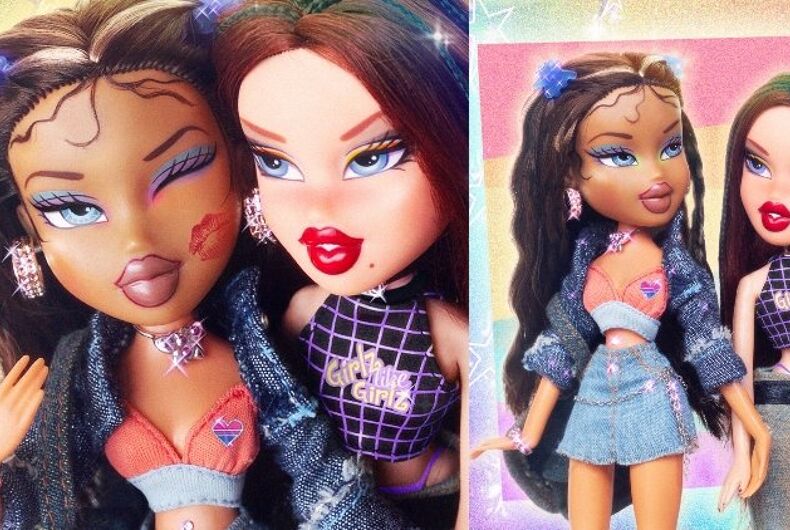 The Bratz dolls Roxxi and Nevra are out as a couplePhoto: Bratz/MGA Entertainment

To celebrate Pride Month in 2020, Bratz shared a sweet snap of two of their dolls, Roxxi and Nevra, cozying up, with one donning a lesbian flag wristband and the other a bisexual pinbadge. “Steppin’ out and coming out,” wrote Bratz, to send a message of support and acceptance to their LGBTQ followers.

It isn’t unusual for brands to jump on the rainbow bandwagon during Pride to garner more followers or boost their sales.

However, over a year later, Roxxi and Nevra are still going strong. They even went on a date to a haunted house for National Coming Out Day 2021.

But why is this important? Is it really such a big deal for two dolls to be “dating?”

When I was little, I adored my Bratz and Barbie dolls. I collected them and vividly remember being utterly raging when an auntie and uncle gifted me Bratz Play Sportz Yasmin for Christmas when I already had her. (It’s okay, they swapped her for Chloe and I remain the favorite niece).

I also know I’m not alone in making my Bratz and Barbies kiss each other, despite having a perfectly fine Ken doll in my collection.

Of course, when you’re five years old, you do most things without thinking or without any real awareness of their meaning. However, had more young women had queer representation in toys when they were younger, it could’ve saved them years of tormenting themselves for being “different.”

If little girls were taught from a young age that two women being in a relationship with one another is pure and wholesome and lovely (and normal), and not taught that “lesbian” is a sexual and dirty word, they could accept their own sexuality much sooner.

Seeing Bratz offer that lifesaving representation to children today makes me emotional because it is giving LGBTQ youth the opportunities to feel seen and heard that I never had.

And not only are queer Bratz dolls incredibly important for children to be taught about the existence of the LGBTQ community, they’re also validating for the queer folk in their 20s who grew up ashamed and frightened to be themselves.

Lesbian dolls who are open and proud of their sexuality not only normalizes female-female relationships from the get-go, it reassures the LGBTQ women in adulthood that there was never anything wrong with them.

Personally, I grew up absolutely wracked with guilt, confusion, embarrassment and so many frightening thoughts regarding sexuality – and when you are raised to feel ashamed for being nothing but your natural self, the self-deprecating thoughts and self-doubt stick. They stick well into your adult life and truly shape how you perceive your self-worth.

If I had known my Bratz dolls were gay when I was younger, I could’ve lived my life with so much more openness and true zeal. I could’ve been more expressive, more authentically me, and less terrified of being ostracized for my identity.

When you’re a five-year-old making your Bratz dolls kiss and hug (I’m pretty sure mine even got married on multiple occasions), and you don’t know exactly what that means, it can create such concern and anxiety. It can genuinely make you feel broken, not to mention alone and strange.

But there’s nothing broken about being a woman who likes other women.

There’s nothing shameful about being that little girl who made her dolls kiss and hold hands.

There’s nothing wrong with needing to be represented in the media so you can feel freer to be yourself.

There’s no shame in any of that, and I’m so glad little girls will get to grow up knowing that.