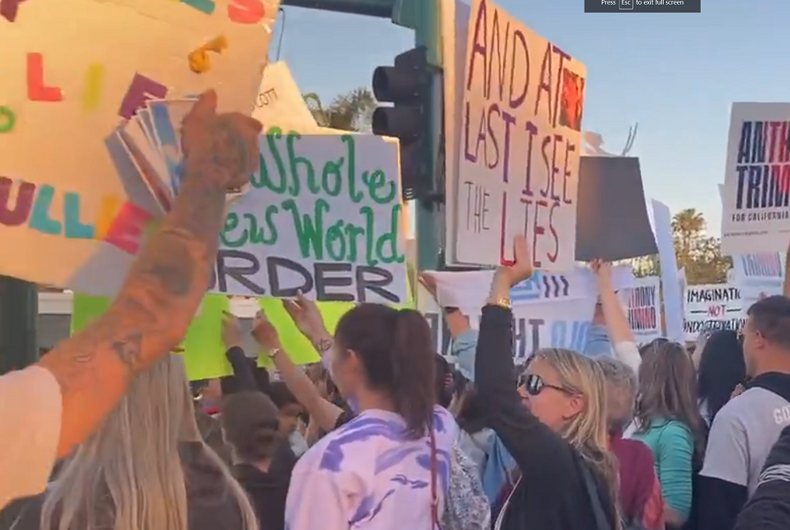 Protestors in front of DisneylandPhoto: Screenshot

Conservatives have been calling for a boycott of Disney for months ever since the corporation released a statement opposing Florida’s Don’t Say Gay law, but Disney executives are bragging about a blockbuster quarter for its theme parks.

During an earnings call yesterday, executives said that Disney’s parks division more than doubled revenue in its first quarter (January to April 2), compared to the same period in the previous year.

Part of the increased revenues was due to more lax COVID restrictions in 2022 compared to early 2021, but Disney CFO Christine McCarthy said that demand in 2022 on “many days” was better than it was even in 2019, before the pandemic started.

“We continue to extend additional capacity,” she said, referring to how Disney has not yet returned to its pre-pandemic practices.

The theme parks “continue to fire on all cylinders, powered by strong demand,” CEO Bob Chapek said, adding that a new line-skipping service, Genie+, is bringing in even more money. “Personalized experiences” – like the immersive “Star Wars: Galactic Starcruiser” hotel that costs up to $6,000 for two nights – have also helped increase customer spending at the parks.

All of this comes after months of conservative attacks on Disney, complete with “anti-groomer” protests in front of Disney’s theme parks in the U.S.

Disney said in a statement in March that it opposes Florida’s Don’t Say Gay law, a statement released after the bill had already passed the state legislature. The statement led to widespread anger on the right against the Disney corporation.

Tony Perkins of the SPLC designated hate group Family Research Council said that Chapek wants “to turn the company from a moderately woke entertainment giant into public enemy number one… The goal is to cut parents out completely, so the left can lead children down this dangerous path.”

Monica Cole of the group One Million Moms tried to push a boycott against Disney as well: “The Florida law is simply designed to protect the youngest school-age children from being taught lies, such as how their birth gender might possibly be a freak of nature and that they can change it.”

“Disney doesn’t think you will care, nor does it think Christian parents and grandparents will take a stand for their children and grandchildren,” Cole wrote in an email to supporters. “I think and hope you will.”

The rightwing attacks on Disney started in March, so, if they do have any effects on profits, they might show in the parks’ profits next quarter.