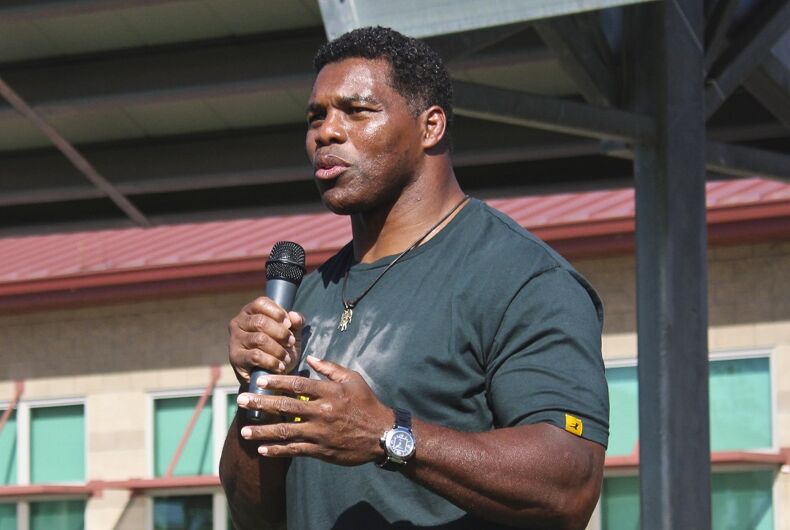 The Senate race in Georgia has come down to a runoff between Democratic incumbent Raphael Warnock and Republican Herschel Walker, the retired football star handpicked by Donald Trump.

If that sounds kind of familiar, that’s because that’s exactly what happened in 2020, when the balance of the Senate depended upon two runoffs in Georgia, including one with Warnock. Trump’s meddling in that election gave Democrats a shocking victory and control of the Senate, and it looks like history could very well repeat itself.

The chief problem is Walker, who is one of the lousiest political candidates in modern history. Not only does he seem to have a problem stringing sentences together, but he gives lip service to evangelical morality while fathering children from multiple women when he’s not encouraging them to have abortions.

Walker would never have been the nominee if Trump hadn’t decided to intervene in the race. Just months after leaving office, Trump was already encouraging Walker to run for the Senate.

Walker has always been far from an ideal candidate. He has admitted to having mental health problems, including dissociative identity disorder. He has been accused of holding a gun to his ex-wife’s head and lying about his business accomplishments. During the GOP primary, his opponents predicted that these problems would haunt Republicans in November. They were right.

While Republican Gov. Brian Kemp easily won re-election, Walker finished slightly behind Warnock on Nov. 8. Under Georgia law, since neither candidate won 50 percent of the vote, they face each other in a runoff.

Unfortunately for Walker, the momentum is not in his favor. The control of the Senate is not in doubt. Democrats already have 50 seats, so Vice President Kamala Harris can cast any tie-breaking vote. Warnock’s re-election simply adds an extra layer of security for Democrats, so Republicans can’t change the balance of the Senate.

Meantime, Trump’s stock isn’t exactly on the rise. Most of his handpicked candidates tanked in the election. His decision to announce his presidential campaign just after the election day was a handy reminder to Democrats of how much they hate him.

Much as Walker’s campaign would like to downplay Trump’s endorsement at this point, Warnock won’t let them. The Democrat ran a devastating ad tying Walker to Trump, finishing with this tagline: “Stop Donald Trump. Stop Herschel Walker.”

When the balance of the Senate was in play, most party leaders were willing to hold their noses to support Walker, but now their squabbling about his campaign and their failure to take the Senate are spilling out into the open, further damaging Walker’s chances. Meanwhile, Warnock is showing a comfortable, if still close, margin ahead of Walker in the one poll that has been conducted since the November election.

Early voting is already underway for the December 6 election, despite the GOP’s efforts to shut it down. Turnout has been heavy, which is a sign of enthusiasm among voters. It will be more than another week before we know the results, but right now it looks like Trump’s record of failure in Georgia’s Senate races may remain unbroken.

Transphobes call for boycott of Tampax over a dirty joke