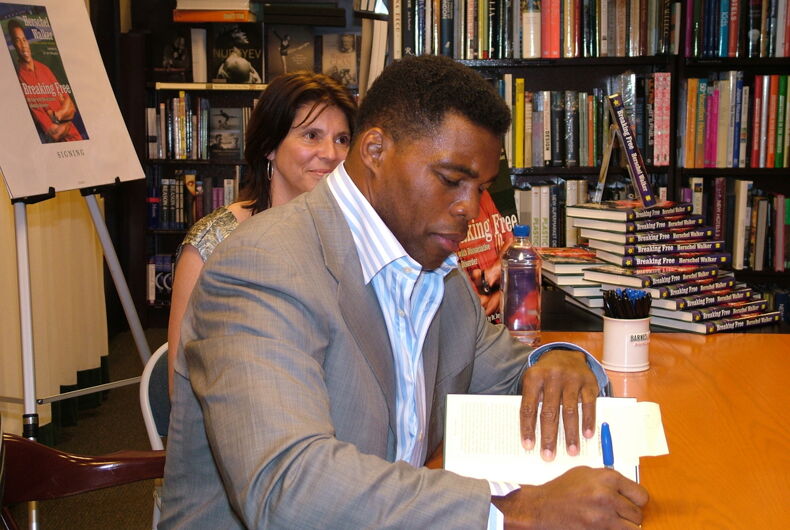 Ten years ago, the scandal surrounding Herschel Walker would have been enough to sink his candidacy.

Last week, a woman who had a relationship with Walker, the Republican nominee for Senate in Georgia, told The Daily Beast that Walker had paid for her to have an abortion. What makes the story significant is that Walker has been loudly proclaiming his opposition to abortion with no exceptions.

As it also turns out, the woman had a child by Walker, one of several that Walker hadn’t publicly accounted for until earlier this year.

Abortion has always been the ultimate morality test for conservative evangelicals. Here we have credible proof that a candidate not only is a hypocrite but actually actively encouraged what anti-choice advocates would call the murder of a baby.

Surely, if there was ever a time when evangelicals would at a minimum back away from the candidate, this was it.

Instead, they rallied around him more than ever.

It’s not as if Walker wasn’t already a troubled candidate. These latest revelations only add to Walker’s existing string of lies, exaggerations, and violent acts. He’s lied about his academic achievements, his association with law enforcement, and his business success.

When he was married, his wife said he held a gun to her head and threatened to kill her; she eventually got a protective order against him. Walker acknowledges having struggled with mental illness, and says he holds himself “accountable” for domestic abuse, even if he doesn’t remember being violent.

The refusal to acknowledge Walker’s participation in what evangelicals are quick to call murder when anyone else does it is the result of two converging (and convenient) beliefs that mark the movement today.

The first is that calling yourself a Christian is a kind of get-out-of-jail-free card. You don’t ever have to be held accountable. You’re forgiven and that’s that. The only punishment you receive is at at the hands of your enemies, who are evil anyway, so you’re suffering for your faith.

Walker explicitly plays to this belief in his ads. “I’m Herschel Walker, saved by grace,” he says at the close of a recent one.

The other, bigger issue that evangelicals’ willingness to overlook bad behavior underscores the fact that for a lot of conservative evangelicals, morality is no longer an issue. It’s about power. The same people who decry drag queen reading hour as a threat to civilization have no problem turning away from the much more serious accusation that Walker was a participant in what they consider murder.

Why can they turn a blind eye to Walker’s sin? Because they need him to win the Senate to consolidate Republican power. It doesn’t matter how flawed – or for that matter how immoral – the candidate may be, as long as he votes the right way.

This is the perfect example of putting power over principle, and it’s a lesson that conservative evangelicals learned well from their interactions with Trump. Hard as it is to remember now, in 2016, the religious right was leery of Trump. Only by promising Supreme Court justices that would meet the right’s standards and by throwing in evangelical Mike Pence for extra measure was Trump able to reassure the right that he was acceptable as a candidate.

Having tasted the power that Trump gave them, evangelicals adapted his transactional approach to politics—and morality. The ends will always justify the means. No one who supports the cause of evangelicals can ever be accused of moral failings. (God knows, if Trump can’t, no one can.)

So instead the religious right rallies around someone like Walker. If anything, they believe that his being accused of paying for an abortion is a good thing.

Tony Perkins, head of the hate group Family Research Council said that the story shows “the power of grace, redemption, and the opportunity America still provides.” Ralph Reed, who began his career working under Pat Robertson at the Christian Coalition, said all Walker’s problems are all in the past: “Herschel’s story is one of redemption and hope.”

That’s one way of looking at it. Of course, the other way to look at it is a bit more Biblical: What does it profit a religion to gain the Senate and lose its soul? And when a candidate even worse than Walker comes along, there’s no reason to believe that evangelicals won’t gladly overlook all kinds of mortal sins as long as it profits them.

Gay couple’s Pride flag was burned in hateful act. But their neighbors rallied in support.