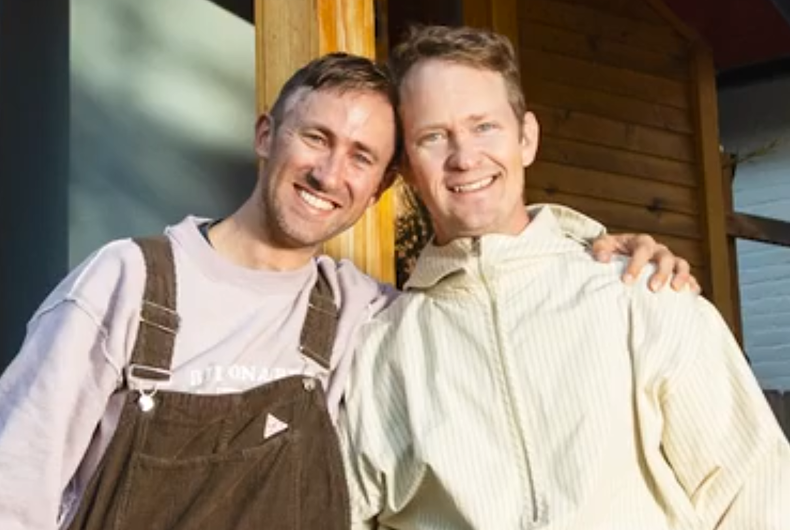 That was the message from Brett Perry and his husband John Michael Schert while they surveyed the remnants of a Progress Pride hanging on their front porch that was burned overnight last week.

The couple has lived on their street in the North End neighborhood of Boise since 2011. In 2020, the first of three Pride flags the couple has hung on their porch was stolen. A second was defaced. On October 5, the third was set on fire.

“This is our progress flag,” said Perry in a video posted to Instagram on his husband’s account. “This is our third time getting targeted. Someone burned it, it looks like in the middle of the night. There’s melted pieces on the floor, and unfortunately the camera didn’t catch it.”

After the first two flags were stolen and vandalized, the couple didn’t report the episodes to police. This time, Schert says, it felt like the vandalism was spiraling.

“We reported this incident because burning feels like so much of an escalation,” Schert told the Idaho Statesman. “It’s quite dangerous and our house could have caught on fire. This feels much more hateful — someone knowing how to cover your camera and then defacing your flag on your property. That feels aggressive and it feels scary because they knew what they were doing.”

Schert says an LGBTQ liaison officer with Boise Police Department responded within minutes, took statements from the couple and neighbors and collected evidence. According to the department, North End residents have reported damaged or stolen pride flags to police seven times in 2022.

Schert and Perry say they’ve been humbled by the support they received from officials and neighbors.

“Two elderly neighbors just knocked on our door, delivering a prayer shawl made by loving hands at the Cathedral of the Rockies,” Schert posted to Instagram. “We don’t know these neighbors all that well, but they wanted us to know they are here to protect us. A care package arrived from Alabama with goods to heal and brighten our home. A Boise 10 year-old tried to surreptitiously leave a gorgeous watering can on our front stoop (good to know the doorbell camera works sometimes) letting us know we are loved.”

Schert had a message for the vandals, as well. “You, the domestic terrorists who committed this act, have failed, for we will never stop living and loving in Boise. And now, hundreds of new progress flags are going up in response to your cowardly actions. Love wins. Humanity wins. Community is stronger than you and your fear.”