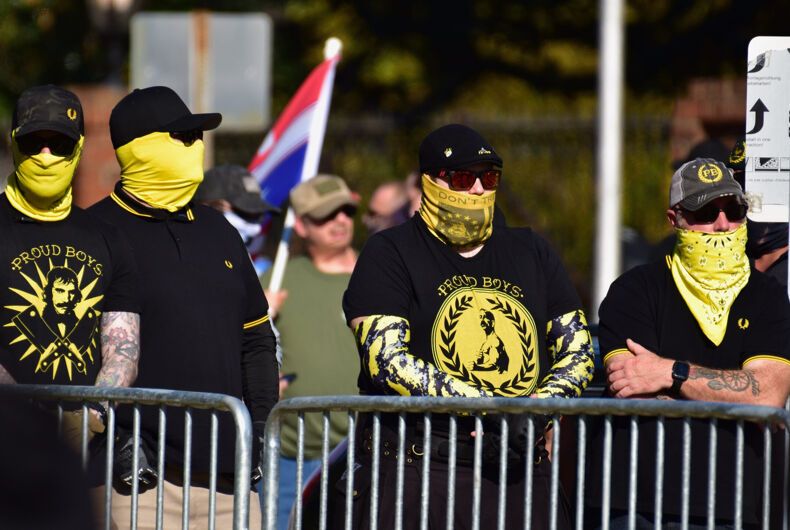 Far-right extremist group the Proud Boys abruptly shifted their focus to anti-LGBTQ+ action in mid-2022. According to a new report from Vice News, the violent all-male, neo-fascist group’s involvement in anti-LGBTQ+ protests tripled this year compared to 2021.

The data comes from the Armed Conflict Location & Event Data Project (ACLED) as well as Vice’s own tracking of Proud Boys activity, which found that 100 percent of anti-LGBTQ+ actions involving the gang took place between late May and December of this year.

The shift reflects a new tactic following the January 6, 2021, Capitol insurrection. Local chapters of the decentralized group have since been forging alliances with other right-wing activists in their communities around culture war issues like anti-vaccine efforts, abortion, masking mandates, and so-called parental rights in education.

“While the Proud Boys used to largely host rallies where they were the headliners, now they come in to act as the muscle for other reactionary groups,” Southern Poverty Law Center senior research analyst Cassie Miller explained.

As baseless attacks labeling the LGBTQ+ community as “groomers” and “pedophiles” have increased this year, so has the Proud Boys’ involvement in anti-LGBTQ+ protests. As Vice reports, members of the gang in at least 11 states showed up at libraries and restaurants hosting drag queen story hours and drag brunches. According to the ACLED, 20 percent of all demonstrations involving Proud Boys since 2020 have turned violent, and members of the group are increasingly likely to be armed.

Most recently, 50 Proud Boys, many of them armed and wearing combat gear, showed up alongside members of other far-right hate groups at a church in Columbus, Ohio, where a holiday drag queen story hour event was scheduled to take place earlier this month.

Increasing Proud Boys activity in the South and Southwest seems to have coincided with increased anti-LGBTQ+ activism from so-called “parental rights” groups and Christian nationalists. “Where these groups have popped up around the country this year, the Proud Boys have followed,” said Southern Poverty Law Center’s Miller.

Miller said that the group appears to be acting “in lockstep” with the GOP and right-wing media in its focus on the LGBTQ+ community.

Even more troublingly, some Proud Boys chapters have apparently made inroads to political legitimacy in their local communities through charity work. ACLED director of communications Sam Jones said this may be a tactic meant to “deepen connections with an existing base in the community, expand local networks, recruit, and draw lines separating the potentially allied in-groups they aim to ‘protect’ from the demonized out-groups that they target.”

And it may be working. Video from the Columbus, Ohio, demonstration showed one police officer high-fiving a member of the Proud Boys.

Small acts of kindness: 6 amazing ways to help queer people as they age