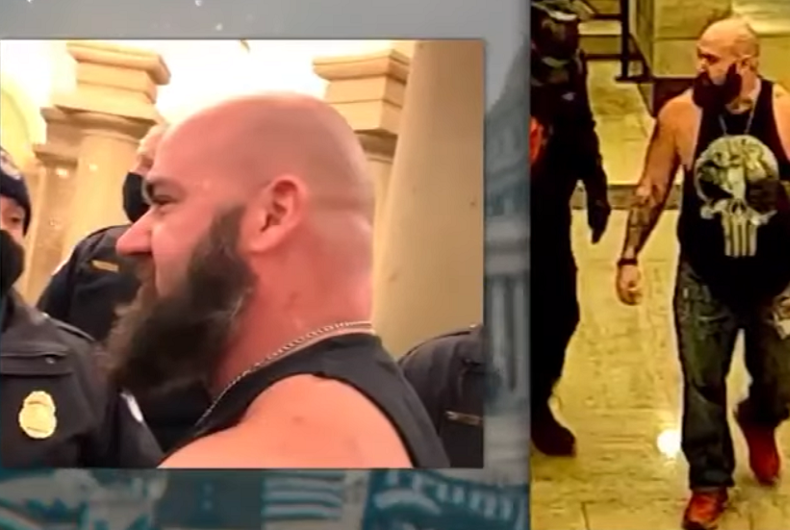 An alleged insurrectionist and member of the anti-LGBTQ hate group Proud Boys threw a tantrum in court just weeks after he was on CNN saying that he would like to participate in the Capitol Insurrection again if he could. And when that didn’t work, he started crying.

Josh Pruitt is out on pre-trial release, facing eight charges connected to his alleged participation in the January 6, 2021 attempt to stop Congress from certifying the presidential election. But a judge is sending him back to jail to await trial.

Prosecutors say that Pruitt was out on probation for another crime and wearing an ankle monitor when he stormed the Capitol last year. They say that he was caught on video walking into the Capitol that day, arguing with police officers, and throwing a “Quiet Please” sign across the crypt.

Pruitt was back in court this week because he has repeatedly violated the curfew that came with his pre-trial release. Pruitt’s lawyer said that he has had trouble getting rides at the hearing, but U.S. District Judge Timothy Kelly said that Pruitt has been warned multiple times to respect the curfew.

He also allegedly threatened people, including his ex-girlfriend. His ex-girlfriend said she was afraid Pruitt would hit her after he sent a “barrage” of threatening text messages and video clips that showed Pruitt standing outside her apartment building and playing with a knife.

“I just don’t believe that he repeatedly is out there in the middle of the night for reasons that are beyond his control,” the judge said.

Prosecutors also brought up a CNN interview that Pruitt did earlier this month where he said, “So you asked me if I’d do it again? I want to say yes.”

“I don’t feel I did anything wrong but knowing the consequences that came out of it would be the part that would make me question it,” he continued.

“I was just a patriot out there, you know,” he continued. “Trying to send me to prison for a few years over this is a complete joke.”

Pruitt’s lawyer said that he was talking about protesting in general, not storming the capitol specifically, but the judge didn’t buy it. Kelly told Pruitt to self-surrender on Monday, January 18 and return to jail.

That’s when Pruitt was done letting his lawyer speak for him and interrupted the judge, saying that if he gets sent back to prison, he’ll go back on CNN and accuse Kelly of violating his First Amendment rights.

Kelly reminded Pruitt that he was being nice by giving the Proud Boy the weekend to “get your affairs in order” before going back to jail.

The prosecutor then said that Pruitt’s outburst showed that he might not even show up on Monday. That’s when Pruitt promised he’ll turn himself in on Monday, and Kelly told him he’ll face bigger legal issues if he doesn’t.

Kelly tried to continue the proceedings, but Pruitt kept on interrupting. Kelly scolded him, raised his voice and said that Pruitt “abused the system and that’s why they’re here.”

“I’m sorry,” Pruitt said as he started audibly crying. “I went through hell over the last year.” He said that he had gotten fired from a job.

“I’m trying to do things right,” he told the judge. “But I’m being attacked left and right. I get death threats all the time. This is what I’m dealing with right now. I get lied about in the media, I’m working with lawyers to work on that.”

Pruitt continued to rant on the phone line, but the judge decided to ignore him and talked about dates and practical matters with the prosecutor.

“Pruitt has apparently just discovered the public line, asks why that exists, everyone continues to ignore him at this point as they continue to discuss logistics,” Buzzfeed News‘ Zoe Tillman reported.

At the end, Pruitt was muttering that he was a “law-abiding citizen… unlike the BLM piece of shit,” referring to Black Lives Matter. That’s when an automated voice on the line said “goodbye” and the hearing was over.