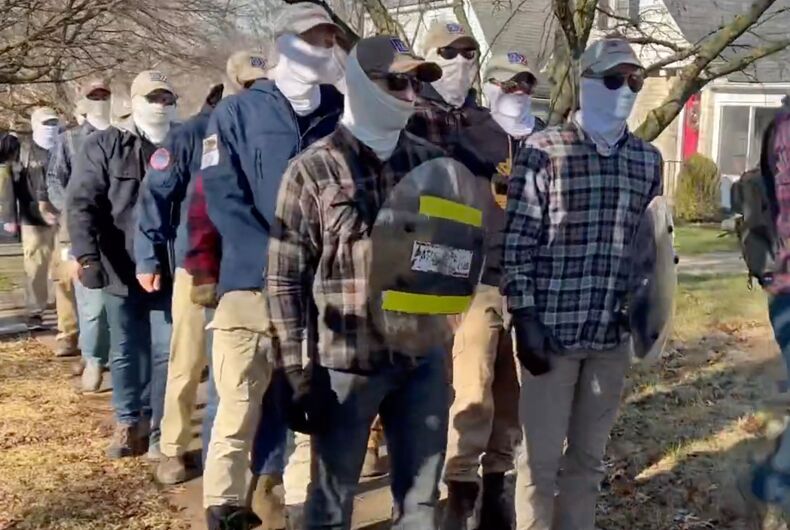 A holiday Drag Queen Story Hour event for kids was canceled in Ohio after over 50 right-wing demonstrators – including members of the white nationalist hate group Proud Boys – created a “potentially volatile and dangerous” situation, according to a statement from Equality Ohio.

Photos of protesters dressed head to toe in combat gear carrying massive weapons showed up anyway and made the neighborhood look like a warzone.

These are the people who showed up outside of a drag show in Columbus, Ohio and caused it to be canceled. This is terrorism. Where is the DoJ? This is a clear violation of civil rights by neo-nazi orgs. pic.twitter.com/wRFOq5GOno

The “Holi-Drag Storytime” event was supposed to take place this past weekend at the K-5 Red Oak Community School within the First Unitarian Church of Columbus, NBC News reported.

The organizers canceled after they decided that police would not sufficiently protect them from the threats of these right-wing protestors. A few days before the cancellation, a group of local LGBTQ+ leaders called the Columbus Roundtable even released a statement advising people not to show up to counterprotest out of fear of violence erupting.

“We strongly urge all LGBTQ+ community members and allies NOT to show up in counter-protest… the safety of the children, families, performers, and our community, are of paramount importance and our actions must be in service to their protection.”

*BREAKING* The statement from the Columbus Roundtable regarding potential violence at the Holi-Drag Storytime event this Saturday. ACTIONS: Buy virtual tickets or support the fundraiser.
·https://t.co/pBHsrk4M8r
·https://t.co/C36PPYYmYJ pic.twitter.com/Xz7CBeMGOF

Speaking through tears on an empty stage amongst holiday decorations, including a rainbow Christmas tree, the school manager, Cheryl Ryan explained how the decision not to host the story hour came about.

“I’m here on this empty stage because in the end there was a disagreement about how this community should be best protected. There is a long documented history of law enforcement doing harm to the LGBTQ community among others that continues to this day… As even a cursory Google search will illustrate it is no secret that extreme right-wing groups including the Proud Boys enjoy a cozy relationship with law enforcement.”

“When the Proud Boys stated they would show up to intimidate and harass and bully our attendees and organizers, we had to make a decision about how we were going to keep everyone safe.”

She said after a week of communication with the police department, she was told they could hire a special duty officer “who may or may not show up because they’re understaffed.”

Ryan said that police had assured journalists they were monitoring the situation, but in reality,  “The police had offered nothing and were not in touch with us.”

“Yet I received hundreds of emails, calls, and messages from folks in the community asking, ‘How can I help? What can I do? I’m ready to show up.'”

“I never heard this message from the city’s leadership and those whose job it is to protect us.”

In the meantime, she said, a “trusted community defense team” offered on a volunteer basis to “execute a thorough safety plan” and gathered 200 people to do so.

So they decided to cancel.

“It turns out our biggest problem wasn’t the Proud Boys after all. I implore this community’s leaders to consider how this could have gone differently,” Ryan said.

Ryan also thanked the people around the country who bought tickets to show their support. Almost 1000 tickets were sold with over $5000 for a local LGBTQ+ charity, and more than 200 people had planned to attend in person.

“We’re scared but we’re strong and we will not go away or make ourselves smaller because someone bullied us,” Ryan said. “Please keep hosting these events in your communities. Keep marching. Call your legislators. If you are a cis, het white ally, use your privilege and step up.”

And finally, “Please hit up a drag show tonight and tip your queens.”

A new report from GLAAD found that a record 124 incidents targeting drag events were reported so far this year across 47 U.S. states.

Editors Note: an earlier version of this article mistakenly attributed the statement from the Columbus Roundtable to Equality Ohio. It has been updated.