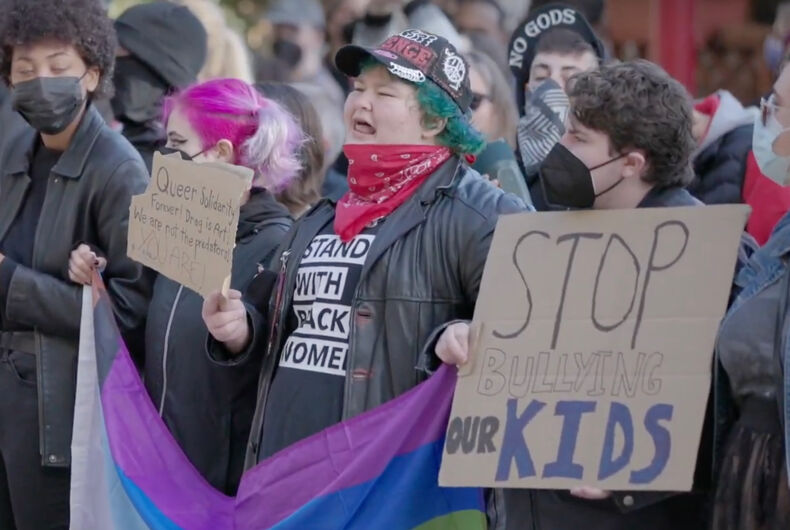 In a scene that is becoming sadly familiar, a protest over another drag event erupted into violence on Sunday, as far-right demonstrators clashed with LGBTQ allies.

On Sunday, protesters and counter-protesters gathered outside Old Nick’s Pub in Eugene, Oregon, where a “Drag Queen Brunch Story Hour” event was taking place. The family-friendly event had reportedly sparked outrage on right-wing social media in part due to the inclusion of an 11-year-old performer who goes by the stage name Venellope.

According to Lane Community College newspaper The Torch, the anti-LGBTQ protesters included local members of the Proud Boys as well as the Rose City Nationalists. Springfield county commissioner David Loveall reportedly attended the protest with members of the Crossfire Christian Church.

Counter-protesters included at least one member of the Eugene Democratic Socialists of America. Supporters of the event reportedly protected families as they entered the venue, blocking protesters who held signs and shouted allegations of “pedophilia” and “grooming” with rainbow flags and umbrellas.

Things escalated when protesters attempted to enter the ticketed event but were blocked by supporters.

Local police were on alert due to negative attention leading up to the event, and Eugene Police Department officers in riot gear were present.

“Because opposing groups were communicating plans to attend, possibly armed, Eugene Police created security plans to allow for a safe environment for everyone in the community to exercise their constitutional rights and freedoms, to protect the lives and property of all involved, and prevent safety disruption to uninvolved community members,” the EPD said in a statement.

As protesters and counter-protesters spilled into the surrounding street and a nearby park, police shut down a section of roadway, blocking traffic.

According to the EPD, firearms were reported present in both groups. As supporters pushed the protesters away from Old Nick’s, rocks, water bottles, and smoke bombs were reportedly thrown. At least one elderly man was reportedly knocked to the ground and one woman seemed to have been exposed to pepper spray.

Video of the confrontation posted by News2Share appears to show anti-LGBTQ protesters firing an airsoft rifle at counter-protesters.

Despite the chaos outside, Old Nick’s posted a message on Facebook later in the day saying that the event itself was a success.

“We had a wonderful safe day,” the post read. “Thank you to every one of you in our community who stood with us. Please be gentle with our staff this week. Almost all of us are queer and it was not easy for any of us. But we did it. Love wins.”

According to The Torch, Venellope had been doxed prior to the event by social media user @honeybadgermom and spent the previous week afraid to go to school.

Local NBC affiliate KMTR reports that Venellope opted not to perform at the event but attended as a guest of honor. The 11-year-old’s parents released a statement saying that Venellope “dreams of being on Broadway or in the movies, and loves to participate and put on plays with her friends.”

“We’ve all gotten some sort of message about, ‘Gee, I hope you die,’ or, ‘You guys are all, you know, child pedophiles,’” Felix Raisner, a performer at Old Nick’s Pub, told KMTR. “And it’s like, where do you get this information? We’ve gotten hate from as far away as the U.K. and across the U.S. As far south as even Mexico, we’ve even gotten some.”

Jaime Roberts, the producer and host of the Drag Queen Storytime, said that the event had been mischaracterized on social media.