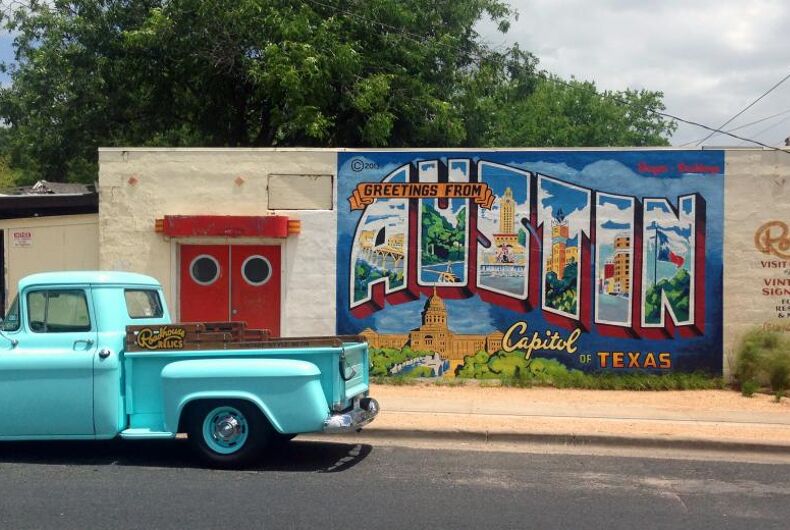 In our Prime series of stories on retirement options, we’ve covered iconic U.S. cities with the largest LGBTQ+ populations and affordable small towns popular with the community. In Part III, we explore mid-sized cities that offer the best of both worlds: cosmopolitan living with the benefits of small-town life.

As Baby Boomers continue to retire at record rates, the number of people 65 and older is expected to double by 2050 to 88 million, meaning over 5 million community members will be looking for retirement options. As people 55+ plan ahead, choices that address a range of economic circumstances, cultural preferences, and healthcare needs are crucial to ensuring quality of life.

These options factor in scores from the Human Rights Campaign Municipal Equality Index, cost-of-living data, LGBTQ+-affirming laws, businesses, and cultural activities. Geographically, they’re all over the map, with a climate to suit every taste. From sizzling summers to frigid winters, the following five mid-sized cities have you covered, plus one far-flung choice you may not have thought of.

Last month, Austin was 900 votes shy of electing its first woman and lesbian, as mayor, a testament to the town’s proud “Keep Austin Weird” ethos and progressive politics in a famously conservative state. Despite the loss (to another Democrat), Austin maintains its reputation as a liberal and queer oasis, with a small-town feel and an undiminished music and arts scene, the SXSW Festival, a big Pride Festival, and a significant (5%) LGBTQ+ population — according to Gallup, that’s the third-largest percentage of LGBTQ+ residents in the country. The cost of living is average for Texas, while no state income tax cushions a tight housing market. Healthcare is some of the best in the state, and over 100 retirement communities cover the area. Local resources include Austin Prime Timers and the aging support group AustinUP . Austin scores a perfect 100 on the Human Rights Campaign’s Municipal Equality Index. Despite a population of close to a million, lots of green space and recreation, low-slung neighborhoods, and good vibrations lend Austin a decidedly small-town feel.

Yes, Toledo. Once a manufacturing epicenter in America’s industrial heartland, Toledo, named after the city in Spain, has experienced a renaissance in quality of life. The “City of Glass” has instituted inclusionary policies at the local level that include a ban on conversion therapy, a domestic partner registry, and antidiscrimination protections. At the same time, lots of employers offer same-sex partner benefits. In 2022, Toledo scored perfectly on the HRC Municipal Equality Index. The city of 270,000, at the mouth of the Maumee River just west of Lake Erie, is chockablock with parks and recreation options, and culturally sophisticated, with the renowned Toledo Museum of Art, galleries, and lots of music and dining options. The cost of living is low, with an average home price of $100,000, while healthcare is plentiful, with a high number of hospitals and doctors per capita.

Tampa/St. Pete isn’t the first gay destination that comes to mind in Florida, but it’s a cultural and LGBTQ+ oasis on Florida’s Gulf Coast that’s only growing in popularity. The city of Tampa has a population of around 400,000, while the larger four-county region, including St. Petersburg across Tampa Bay, comes in over 3 million, but the area is far from congested, with a tropical small-town feel. Ybor City, a National Historic Landmark District, is Tampa’s gayborhood. The area is packed with LGBTQ+ venues, businesses, and events, including the Tampa Bay International Gay and Lesbian Film Festival and, surprisingly, the largest Pride fest in Florida. Tampa has anti-discrimination ordinances on the books and earns a perfect score on the HRCME index. The LGBTQ+ population tops out at 6%, one of the highest in the U.S. Retirement communities are abundant, as are healthcare options, and it’s beach weather year-round. Cultural destinations include the world-class Dalí Museum in St. Petersburg. Overall, the cost of living is low in Tampa/St. Pete, and there’s no state income tax in Florida.

Pittsburgh has regularly ranked as one of the most livable cities in the U.S.. It’s become known in recent years as a popular gay enclave, as well: Queer As Folk was set here, and it’s home to The Andy Warhol Museum — the queer artist grew up in Pittsburgh before striking out for New York, a few hundred miles east. The “City of Bridges” (count ’em — over 400 crisscross the city) is set spectacularly at the confluence of the Allegheny and Monongahela Rivers, with galleries, jazz clubs, sports venues, parks, and various dining destinations filling the city’s refurbished 19th-century streets. The city of 300,000 has more than its share of skyscrapers (30), major league sports franchises (3), and hospitals (5). Local resources include SAGE Western Pennsylvania at Persad Center and PrimeTimers. A perfect score on HRC’s Municipal Equality Index accompanies a low cost of living and housing, warm summer nights, and snowy winters.

Tucson, about a hundred miles southeast of Phoenix, has many of the charms of that desert oasis without the sprawl and oppressively hot summers. Set amid five different mountain ranges at an elevation of 2600′, the city of 500,000+ is surrounded by natural beauty, with parks and protected areas a treasured resource. Tucson was the first city in Arizona to pass an antidiscrimination ordinance protecting LGBTQ+ residents and city workers, while the University of Arizona Tucson was a pioneer with its Institute for Lesbian, Gay, Bisexual, and Transgender Studies. The HRCMEI awards Tucson a perfect 100. Tucson’s popular cultural offerings include galleries, music venues, museums, and historical sites, as are UofA and Arizona State University classes and lectures. Tucson counts 25 retirement communities in the area and five major hospitals, and local resources include Southern Arizona Senior Pride and Elder Circles. The cost of living and housing is lower in Tucson vs. Arizona and the U.S.

The capital of Idaho, pop. 235,000, is very far from pretty much everything except the natural beauty it’s surrounded by in the Treasure Valley in the southwestern part of the state. Set on the Boise River at 2700′ above sea level, it’s a 500-mile drive to the nearest significant metropolitan areas — Portland, OR to the west and Salt Lake City to the south — and that’s how people like it. Boise is a college town with six universities and colleges in the city limits, while three hospitals are the region’s biggest. Downtown Boise boasts an active nightlife with lots of big-city events at small-town prices, plus three gay bars to choose from. “The City of Trees” has an ordinance prohibiting discrimination on the basis of sexual orientation and gender identity, passed with the help of the first out member of the Idaho legislature, and is home to a robust, if small LGBTQ+ population with a popular Pride Festival and an active Community Center.