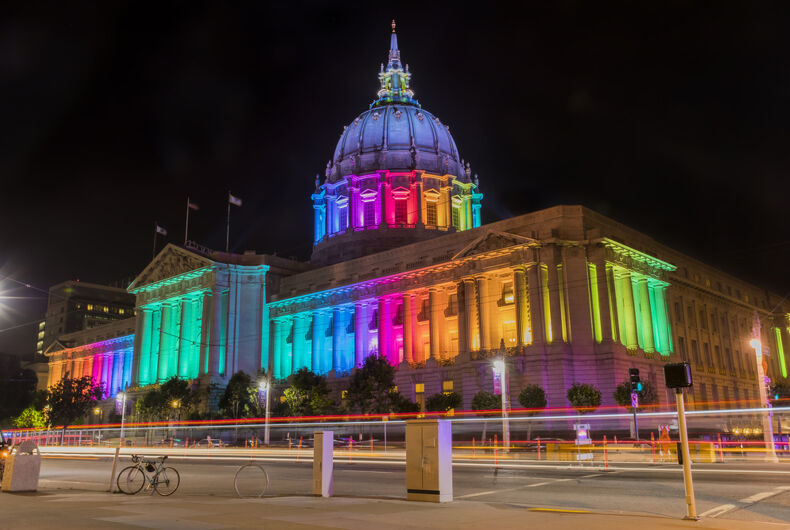 Planning where to enjoy your golden years prompts a lot of questions. Do you need a lot of social interaction? Do you enjoy cultural events like museum exhibitions and concerts? Do you like to drive or prefer to walk around town? Do you want to kick up your feet and lounge by the pool, or hit the gym and go for a run?

And how important is being among people with shared queer history and experience?

These five iconic gay cities tick the boxes, and feature large well-integrated LGBTQ populations, by number and/or percentage, in the United States.

They also provide an abundance of quality care and services for aging populations, in communities ranked the most affirming in the country.

Whether you’re a couch potato or disco napper, the world is at your doorstep in these five world-class cities, plus one you may not have thought of.

1. San Francisco
Age is just a number in this destination city, where residents from Mark Twain to Harvey Milk have enriched the City’s reputation for freedom of thought. The percentage of the LGBTQ population clocks in at 6.2%, the highest in the country. The gay mecca enjoys a perfect score of 100 from the Human Rights Campaign’s Municipal Quality Index, ranking efforts like city services supporting older members of the community, pro-equality legislation and policy, and even gay cops. San Francisco is home to some of the most cutting-edge medical services in the world and prizes the arts, entertainment, its parks, and even winning sports franchises with large queer followings and Pride nights. Ditch your car; you can walk or take public transportation anywhere among its dazzling 49 square miles.

2. New York
In New York, everything is at your doorstep, coming or going. You can hole up at home and have the city delivered, from a therapist’s visit or a massage to every kind of take-out and getting your kitchen stocked. Or step out into the cultural capital of the world, and enjoy a practically endless list of museums, theatre, music, and restaurants, where generations mingle at MoMA and the Metropolitan Museum of Art. According to UCLA’s Williams Institute, the New York metro area boasted over 700,000 LGBTQ residents in 2021, equal to nearly the entire population of San Francisco. Like San Francisco, New York is a walking city, and everywhere is accessible by public transportation, from Midtown Manhattan to Coney Island. Healthcare is minutes away wherever you are, and available from professionals who know you well, while community services and volunteer opportunities abound. The country’s largest gay metropolis earns a score of 100 on HRC’s Municipal Quality Index.

3. Miami Beach
The original retirement capital of Florida is also an LGBTQ mecca — one of a constellation in South Florida, from Wilton Manors to Key West — and accounts for 5.5% of the population. Now an intersectional Latin-American melting pot as well, Miami Beach has one of the country’s highest concentrations of older community members, who come for the sun, and walkable proximity to shopping, dining, and cultural events along Ocean Drive and the Lincoln Road Mall. Just across Biscayne Bay, the City of Miami offers major art, music, and sports venues. With a perfect score on the HRC Municipal Quality Index, this home to both world-class hotels and single-occupancy retirement communities is a welcoming place for visitors and residents alike.

4. New Orleans
Like the Big Apple, the Big Easy enjoys a high percentage of the population (5.1%), and a sense of inclusiveness fostered by generations of cultural crosscurrents, most pronounced in the historic French Quarter. While earning an equally impressive HRC Municipal Quality Index score of 100, the cost of living in New Orleans is more modest than her east and west coast counterparts. Home healthcare averages $36,608 annually, according to Senior Advice, very low by national standards, and health services for older adults are plentiful. In addition to Mari Gras, community events include Southern Decadence, a Gay Easter Parade, the three-day Halloween New Orleans, plus jazz, and some of the finest dining in the country.

5. Palm Springs
This desert oasis and long-time Hollywood getaway is one of the gayest cities in America, with about half of residents 55+ identifying as LGBTQ. Palm Springs and its neighbors in the Coachella Valley offer year-round blue skies, temperate winters, and scorching summers with temps topping 120 degrees. Healthcare serving a large retired population is some of the best in the country, from the Eisenhower Medical Center to the Betty Ford Clinic. If you love golf, a poolside lifestyle, and desert rambles with gay neighbors plus chosen family, this is the spot for you. With light traffic and no freeways necessary, driving is a breeze; or grab a golf cart for a trip to the clubhouse. With over a million LGBTQ visitors every year, a vibrant social life can be found in the city’s resort and boutique hotels, world-class restaurants, and bars. For the annual Coachella Music Festival, rent out a room in your mid-century Modern ranch house to pay for a three-day pass, and then some. Palm Springs scores a perfect 100 on the HRC Municipal Quality Index.

6. Asheville, NC
This artsy mid-sized city of 94,000 is located in Western North Carolina where the French Broad and Swannanoa rivers meet in the Appalachian Mountains. It’s also one of the most progressive and gay-friendly towns in the southeast. According to the last U.S. census, the Asheville area has 83% more LGBTQ-identified people than the typical American city or town, while in 2021, the city council unanimously passed one of the country’s most sweeping anti-discrimination ordinances, protecting residents based on sex, age, sexual orientation, gender identity or expression and several other classes. The downtown area boasts more than 30 art galleries, and the remarkable Gilded Age-era Biltmore Mansion and Museum attracts visitors from around the world. Asheville punches above its weight with healthcare as home to North Carolina’s Mission Health System and the region’s central provider of veterans’ healthcare services, while the city’s mountain elevation makes for comfortably mild summers and temperate winters.