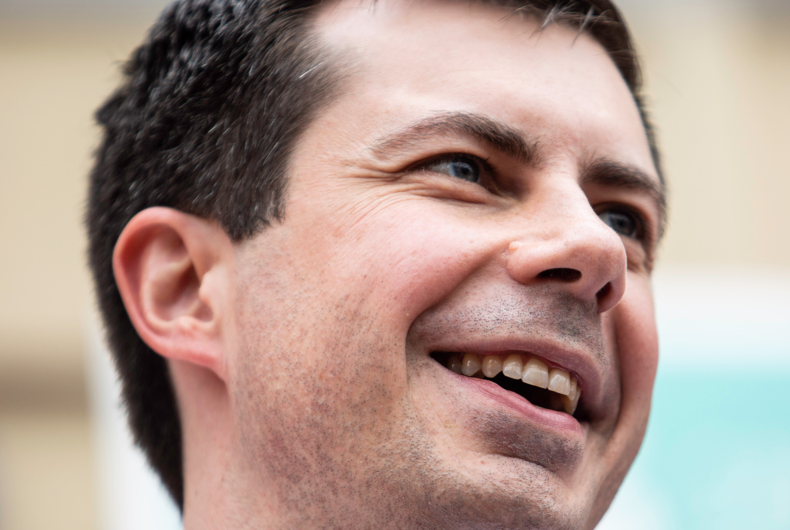 This year, out Secretary of Transporation Pete Buttigieg remained both the king of the clapback and the king of LGBTQ+ hearts.

Between snarky news appearances, tributes to his husband, and encouraging messages to youth, Buttigieg couldn’t stop making us smile this year.

Here are five times he brought us joy.

When he penned a sweet love note to his husband

Buttigieg won Valentine’s day this year with a love letter to his husband, Chasten Buttigieg.

Buttigieg wrote the tribute to Chasten on Instagram beside an adorable photo of the two of them smiling in the sunset.

“Happy Valentine’s Day to the love of my life! I’m even more thankful for Chasten now that our love is not just an incredible gift between us but the foundation of a family. Here’s hoping our hearts continue to grow with every step we take together.”

In May, Buttigieg was riding the New York City subway and ended up sitting across from Devon Rodriguez, TikTok’s most-followed artist with over 25 million fans.

Rodriquez frequently posts videos of himself drawing unsuspecting straphangers and giving them the sketch while recording their reactions. So when he saw Buttigieg grab a seat across from him, Rodriguez quickly grabbed his sketchpad.

A stunned Buttigieg accepts the drawing as Rodriquez thanks him for “everything you’re doing for the subway.”

When he sent a heartwarming letter to a gay teen activist

Zander Moricz drew media attention earlier this year when his high school principal told the out senior class president of Pine View School for the Gifted in Osprey, Florida that any mention of LGBTQ issues, advocacy, or his sexual orientation in his valedictorian speech to graduating seniors would result in his microphone being silenced.

Instead, Moricz delivered a thinly-veiled graduation speech using his curly hair as an analogy for his sexual identity. The speech went viral after it was posted on YouTube, and apparently Buttigieg saw it.

“After Chasten and I saw your graduation speech earlier this year and heard about your appearance at the Department of Education, I wanted to be sure to personally thank you for your voice and advocacy,” the Transportation Secretary and former presidential candidate wrote in his letter to Moricz. “Your combination of wit and courage has reverberated across the country in ways that will benefit people you’ll never even meet.”

“I am always mindful that my own service as the first openly gay Cabinet Secretary is possible only thanks to the activism and advocacy of other who came before my time – and there is no doubt that your example will open doors for many others who now look up to you, even as you are just starting your own path forward following your graduation.”

Thank you @PeteButtigieg 💜. The fight for Florida has only begun. pic.twitter.com/95LD7VelSa

In September, Buttigieg very politely slammed a Republican official who called him a “weak little girl.”

Michigan Republican Party co-chair Meshawn Maddock mocked Buttigieg by tweeting: “We’re so blessed this weak little girl moved to Michigan! Looks like he’s bringing all his California Dreaming here with him.” She then shared a clip of Buttigieg expressing support for electric cars.

Always one for a clapback, Buttigieg brought up his own daughter.

“If she wants to talk about little girls, Chasten and I are raising a little girl and a little boy. And we are raising them to have better values than the chairwoman,” Buttigieg said. “The rest is politics.”

When Rep. Marjorie Taylor Greene (R-GA) spoke at a rally for Donald Trump in Michigan in October, she declared that Buttigieg is trying to “emasculate the way we drive” by supporting environmentally friendly transportation.

Greene touted the Americanness of “the roar of a V8 engine under the hood of a Ford Mustang or Chevy Camaro and incredible feel of all that horsepower” and said that “Democrats like Pete Buttigieg want to emasculate the way we drive and force all of you to rely on electric vehicles after they shut down your great Michigan auto industry.”

During a Fox News appearance, Buttigieg responded to the accusation.

“I literally don’t even understand what that means,” he said.

“My sense of manhood is not connected to whether my vehicle is fueled by gasoline or whether it’s fueled by electricity,” he retorted. “This is a practical matter.”

When the Fox host asked Buttigieg if he was “offended,” he responded: “It was a strange thing to say. To be honest, there are other members of Congress that I pay more attention to when I’m thinking about opinions that really matter or ideas that are gonna be critical to engage with.”

LibsofTikTok creator Chaya Raichik may have been present at the January 6 U.S. Capitol protest