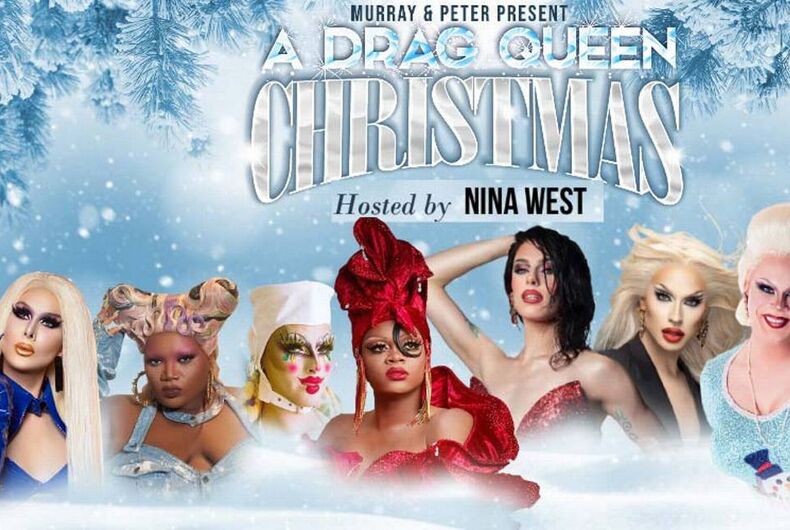 An ad image for the event

The administration of Gov. Ron DeSantis (R-FL) is investigating a performing arts venue for hosting a drag queen event.

A right-wing online activist also recorded a video of himself being escorted out of the venue by security during the event after he stood up and yelled about kids being present.

Florida’s Department of Business and Professional Regulation (DBPR) is investigating the Broward Center for the Performing Arts in Fort Lauderdale and other venues after receiving “multiple complaints” of a December 26 “A Drag Queen Christmas” event that was allegedly “sexually explicit” and “marketed to children,” The Hill reported.

If the venues are found to have violated the DBPR’s licensing standards, they could have their business and liquor licenses revoked, essentially putting them out of business. The investigation could also be referred to the Florida Department of Law Enforcement for “potential criminal liability.”

A spokesperson for the Broward Center said the venue as of late Wednesday afternoon had not been contacted by state officials.

In a letter addressed to the Orlando Philharmonic Plaza Foundation, the second-to-last stop on the show’s tour, and sent to Drag Fans, the event’s organizer, the DBPR wrote, “The Department has reason to believe that this drag show is of a sexual nature, involving the exposure or exhibition of sexual organs, similar sexual activity, and/or the sexualization of children’s stories. The Department has become aware that drag shows by Drag Fans have been marketed to and attended by minors, including young children.”

In actuality, the show contains one reference to alcohol with neither no nudity nor sexual references.

A similar letter was also sent to the James L. Knight Center in Miami, another venue that hosted the event.

A spokesperson for the Broward Center told The Hill that the drag performance was limited to people 18 years or older, unless accompanied by a parent. However, the Center’s web page advertising the event on December 17 called the event “an all-ages show” that “may contain adult content.” The Broward Center also sent out a “Know Before You Go” message to ticket purchasers making them aware that the show contained adult themes and content.

DeSantis spokesperson Bryan Griffin said that the drag event had been “promoted as open to all ages at venues across the state,” the aforementioned publication reported.

A right-wing social media activist Chris Nelson posted a video on Twitter of himself yelling at drag performer Nina West while being escorted from the show by a security guard.

“It is not right to have drag shows with children at all!” Nelson said while being escorted out of the event. “You should arrest them for having children at this thing,” he told the guards. “That is who you should be arresting.”

The audience booed him as he left.

After noticing MULTIPLE children in the audience at the explicit Drag Queen Christmas in Ft Lauderdale I called out performer Nina West for inviting and allowing children to come to her sexually explicit shows! pic.twitter.com/3XA4qqV0IR

Earlier this month, the Texas Log Cabin Republicans’ San Antonio chapter joined armed extremists to protest “A Drag Queen Christmas.” The protest’s organizing group, This Is Texas Freedom Force, has been labeled an “extremist militia group” by the FBI.

The groups joined with religious right activists to denounce the show as immoral and inappropriate for children. The small group of extremists was met with a large crowd of approximately 150 counterprotesters. Both groups came armed.

DeSantis’ administration has targeted a drag event at least one other time in Florida.

In July, his administration filed a complaint against the Miami restaurant R House after it hosted a drag brunch event attended by some children. DeSantis’ complaint cited a 1947 state Supreme Court ruling which declared “men impersonating women” in a “suggestive and indecent” manner as a public nuisance.

“Having kids involved in this is wrong,” DeSantis said about the restaurant’s event. “That is not consistent with our law and policy in the state of Florida, and it is a disturbing trend in our society to try to sexualize these young people.”

Right-wingers and conservatives have increasingly targeted and protested at drag shows, claiming that the performers seek to “sexualize” children. Drag performers and venues hosting their events have been subject to death threats and harassment for participating.

Five times Pete Buttigieg made us smile this year