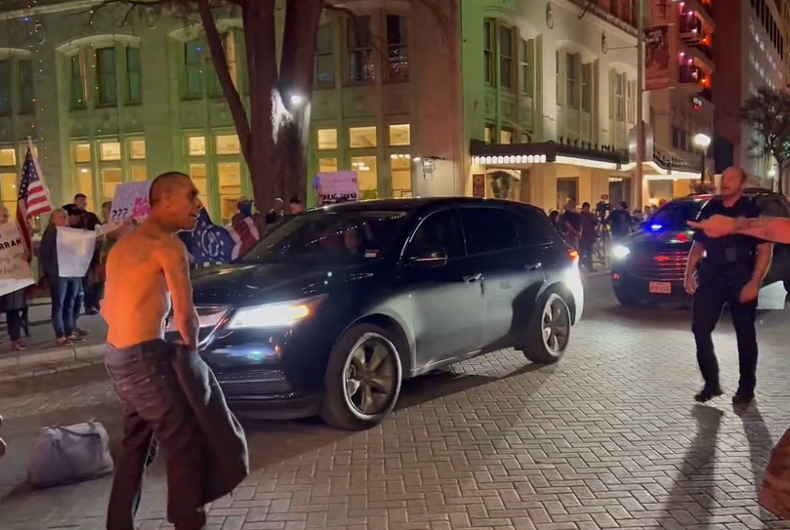 A protestor confronted counterprotestors at the eventPhoto: Screenshot: Joey Palacios/Texas Public Radio via @Joeycules on Twitter

The Texas Log Cabin Republicans’ San Antonio chapter joined armed extremists to protest outside a drag show featuring queens from RuPaul’s Drag Race. The organizing group, This Is Texas Freedom Force, has been labeled an “extremist militia group” by the FBI.

The groups joined with religious right activists to denounce the show as immoral and inappropriate for children. The show, “A Drag Queen Christmas,” contains one reference to alcohol; there is no nudity or sexual references.

The small group of extremists was met with a large crowd of approximately 150 counterprotesters. Both groups came armed.

Officers kept the two sides separated and guarded the venue’s doors. While protestors occasionally stepped into the street to heckle the opposing side, no arrests were made. One anti-LGBTQ+ militia member was told to leave after he tried to instigate a confrontation; he complied and left the area.

The conservative protestors could be heard shouting “pedophile” and “groomer” at the people attending the drag show, holding signs that said “SODOM & GOMORRAH” and that accused LGBTQ+ people of seeing children as “prey.”

Counterprotestors shouted back “The groomers are in your churches!”

In a development which will surprise exactly 0 people, the local Log Cabin Republicans chapter has joined the anti-drag show protest outside the Aztec Theatre in San Antonio. pic.twitter.com/DAVZwBE6Pj

Once a respected part of the LGBTQ+ movement, the Log Cabin Republicans, like large swathes of the GOP, embraced Donald Trump and everything he stood for. The organization has defended Florida’s “Don’t Say Gay” law by comparing its opponents to pedophiles, opposed landmark LGBTQ nondiscrimination legislation, and has repeatedly been rejected by the Republican Party.

The group has targeted Chasten Buttigieg, Transportation Secretary Pete Buttigieg’s husband, in an effort to portray him as an effete gadfly. Chasten Buttigieg is a former elementary school teacher and was an outspoken critic of the Florida law.

After spending the past few years decrying LGBTQ equality and denigrating the “leftist” community in general and transgender people in particular, the Log Cabin Republicans found out that people were finally listening to them. Unfortunately for them, it was their own party. The Texas chapter was denied even a minimal gesture of inclusion – a booth at the state GOP convention.

The group is now often compared to Jews for Hitler.

Note how he immediately retreats once he catches even a faint glimpse of the tactical folks slowly walking up the line on the right. https://t.co/g9abj1DH59

Another example: Jack Finger, a precinct chairman from San Antonio, is protesting that the LGBTQ+ Log Cabin Republicans were mentioned in a program. He said he’s fighting “evil.”

A few people have told him what he’s doing is wrong, but more have showed him support. https://t.co/3y9qID173m pic.twitter.com/ZRzKZdPl1q

According to a local website’s ad for the event, Drag Race alumnae Alyssa Edwards, Silkie Nutmeg Ganache, Jujubee, and others performed at the event hosted by Nina West.

Advice for straight couples from a long-term gay couple