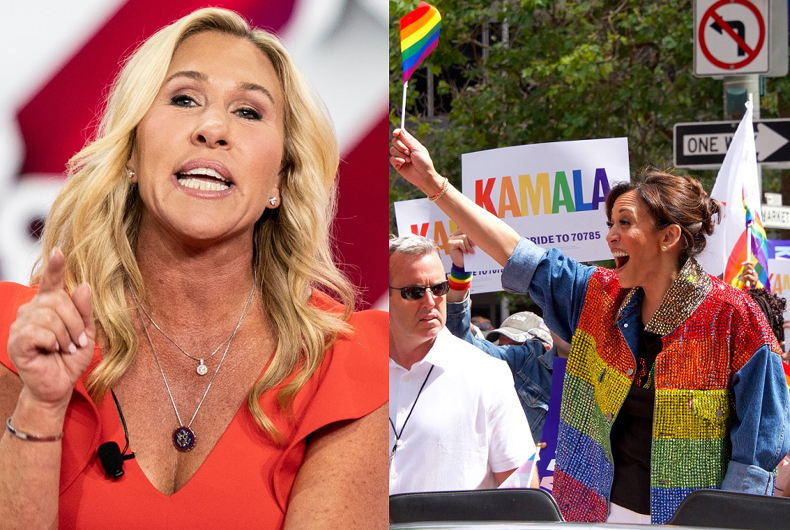 “Kamala Harris, she’s so bland, and her clothes are so brown and neutral,” Greene said on video. “She’s trying to do the whole gender-neutral thing or maybe disappear into the background that you can’t see her.”

Conservatives have long used gender-based attacks on Democrats, saying Democratic women are too masculine and Democratic men are too feminine. But in this case, it’s unclear what Greene was even referring to, both because neutral colors are often featured in women’s clothing and because Harris herself is fond of bright, vibrant colors.

For example, the Lincoln Project pointed out on Twitter that Harris wore a solid royal purple outfit to her and President Joe Biden’s inauguration.

Others wondered if Greene’s comments were related to the fact that Harris is the first Indian American and Black vice president in U.S. history.

She wanted to say her skin was brown but stopped herself. This isn’t about clothing.

I honestly thought MTG was trying to say “skin.” Furthermore, there is nothing about Vice President Harris that suggests she is “trying to do the whole gender neutral thing.” Rep Marjorie Taylor-Green is trolling, gaslighting and “dog whistling” … after praising sedition. pic.twitter.com/I2my3YaT8N

Mocking other women's looks. Racist dog whistles. Outright bullying and lies. Everything she's got comes straight from the Trump playbook.

This is the same event where Greene said that if she had organized the January 6 Insurrection, conservatives would have “won” and people would have been armed.

People made fun of her for complaining about sex toys.

Marjorie Taylor Greene is worried that you can buy a butt plug for personal use at Target.

I'm worried that you can buy an assault rifle to use on everyone in your community EVERYWHERE.

When you are talking to a room full young republicans in NYC who can’t get laid, this information does help

But somehow it’s Biden’s fault. He really is the most powerful man in the world—he is responsible for things that happenend while he was not even in office. Whereas Trump is responsible for nothing—so why do they support that weak loser?

Why was she shopping for low end (pun intended) toys there…
I mean,you can buy sushi in a gas station…but should you?

Ha! Does the audience even question how Marge KNOWS Target and CVS carry these items?

I wonder how many in that assembly will be heading out to pick up a few today, so that they can avoid having their cars spotted in the adult store parking lot.

Out Gov. Kate Brown commutes the sentences of all 17 of Oregon’s death row inmates