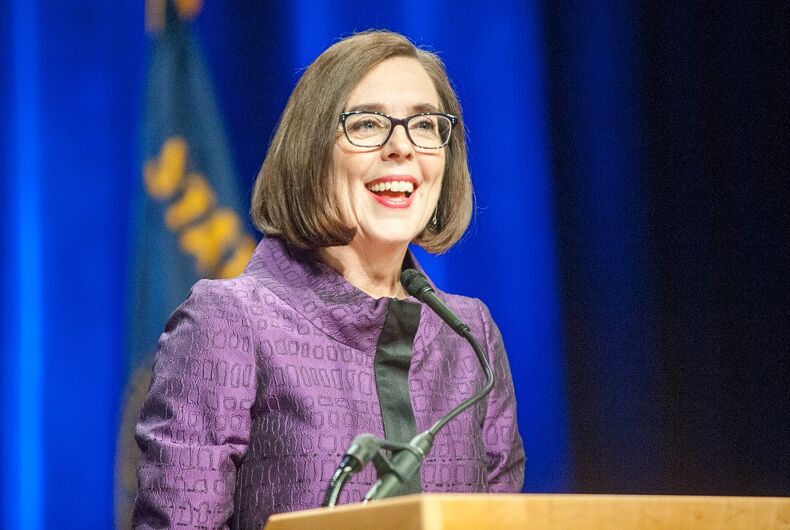 Oregon’s outgoing and out bisexual governor has commuted the sentences of all 17 people facing the death penalty in the state.

In a statement released on Tuesday, Gov. Kate Brown (D) said, “I have long believed that justice is not advanced by taking a life, and the state should not be in the business of executing people — even if a terrible crime placed them in prison. This is a value that many Oregonians share.”

Brown commuted all 17 inmates’ sentences to life in prison without the possibility of parole.

“Unlike previous commutations I’ve granted to individuals who have demonstrated extraordinary growth and rehabilitation, this commutation is not based on any rehabilitative efforts by the individuals on death row,” Brown said. “Instead, it reflects the recognition that the death penalty is immoral. It is an irreversible punishment that does not allow for correction; is wasteful of taxpayer dollars; does not make communities safer; and cannot be and never has been administered fairly and equitably.”

As The Oregonian notes, the state’s voters voted to insert the death penalty into Oregon’s constitution in 1984. But the state has not executed anyone in 25 years, with Brown continuing the death penalty moratorium put in place by former governor John Kitzhaber (D) in 2011.

In 2020, Brown directed the state’s Department of Corrections to dismantle its death row, moving the 27 inmates then facing the death penalty at the Oregon State Penitentiary to the general population. Along with the 17 commutations on Tuesday, Brown also directed the Oregon State Penitentiary to dismantle its execution chamber.

“The death penalty is immoral, it is applied arbitrarily and inequitably, it is a waste of taxpayer dollars, and it does not make communities safer,” Brown wrote in a letter to Oregon Department of Corrections director Heidi Steward. “As a result of these commutations, we no longer have anyone serving a sentence of death and facing execution in Oregon. And that, in turn, means that the execution chamber at the Oregon State Penitentiary is both unnecessary and does not serve any purpose.”

“Accordingly, I direct the Department of Corrections to immediately close and take actions toward dismantling the execution chamber and removing any equipment in the chamber, so it can no longer be used for state-sponsored executions.”

Brown, who was the first out bisexual governor in U.S. history, will be replaced by governor-elect Tina Kotek (D). The first out lesbian to serve as the Speaker of the Oregon House of Representatives and the state’s longest-serving speaker, Kotek beat Republican Christine Drazan and Independent Betsy Johnson in the November election.

Kotek is personally opposed to the death penalty and has promised to continue the state’s moratorium.