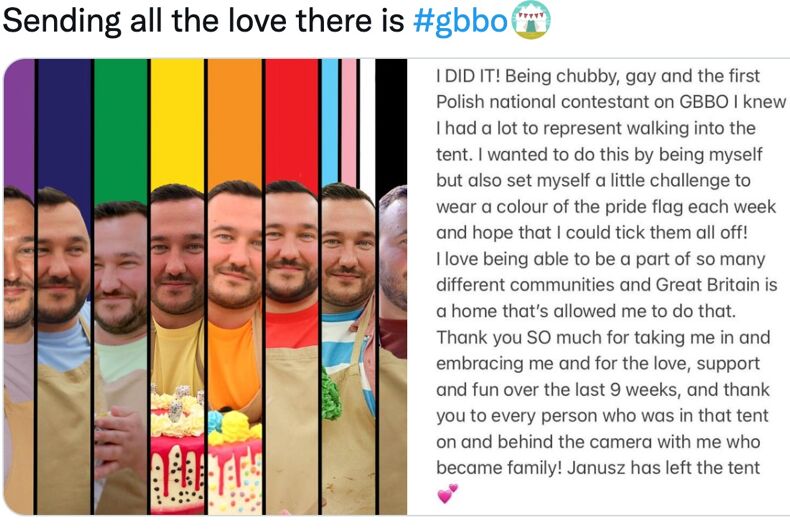 The Great British Bake Off (GBBO) has an undeniably strong gay fanbase. We can’t say for certain what it is about baking, or Paul Hollywood, that the queer community loves – maybe it’s those blue eyes, maybe it’s the soggy bottoms and firm wobbles. But, we do know the show has given us some gems of gay moments over the years.

So we decided to pick out some of our favorite gay moments after 12 years of loving the tastiest show on TV.

Now, GBBO is no stranger to innuendos, and Mary Berry provided the ultimate chuckle when 2016 winner Candie Brown made a gingerbread pub in homage to her parents’ pub where she grew up.

As the judges decided which part to eat first, the Queen of Baking herself declared: “I’ll eat a bit of carpet,” and, well, the memes were born.

“How big’s your organ going to be, Henry?” 😂😂😂 #GBBO pic.twitter.com/BtBDGp1fhn

Hollywood walked right into this one, let’s be honest.

While chatting with Henry Bird in series 10 about the church organ he was creating, the Liverpudlian baking extraordinaire unintentionally asked a rather personal question.

“Right, biscuit sculpture, what are you doing?” Hollywood began, before Henry clarified that, no, he was not making a kidney or a liver, but a church organ.

“How big’s your organ going to be, Henry?” Hollywood quizzed seriously, before an amused Bird replied: “Well…”

Cast your mind back to series 4 to remember the icon that is Ruby Tandoh.

Sadly, like many women on GBBO, she had been subject to speculation that she was flirting with judge Paul – some even said they were sleeping together – in order to get further in the competition.

Following her appearance on the show after finishing as a runner up, Tandoh truly had the last laugh, as she came out online with a video of Diana Ross performing “I’m Coming Out” and firmly shut down any rumors of her “banging” the TV star.

She’s also since been very vocal about her views on “misogynistic” Paul, branding him a “peacocking manchild” and mocking him showing up for work “revving a rental Lamborghini.”

“It’s the most ridiculous, camp, over the top thing in the world – a baking competition? In a massive tent? With innuendos and piping bags and flamboyant cakes?”

Janusz Domagala and his Pride shirts

Sending all the love there is #gbbo pic.twitter.com/9klCzuLt5l

While it may have gone unnoticed by viewers at the time, 2022 Bake Off star Janusz Domagala revealed following his exit that he wore a color of the Pride flag in every episode for each week on the show.

Sharing a collage on social media, the gay Polish TV star placed pictures of himself from each week side by side, writing: “Being chubby, gay and the first Polish national contestant on GBBO I knew I had a lot to represent walking into the tent.”

“I wanted to do this by being myself but also set myself a little challenge to wear a colour of the pride flag each week and hope that I could tick them all off!”

“I love being able to be a part of so many different communities and Great Britain is a home that’s allowed me to do that.”

Let’s hear it for the gay bakers!

GBBO has seen several gay contestants over the years, all with extraordinary talent and living proof that baking is for everyone.

In 2012, John Whaite won and has gone on to have a successful career as a chef and TV presenter. He even made history on Strictly Come Dancing by forming the show’s first-ever male-male partnership, finishing in second place.

One of John’s most famous TV moments, however, came when he committed one of baking’s biggest sins at the very start of the competition, when he mixed up salt and sugar while making 1970s-style rum babas, which Paul ended up spitting out.

As for other queer bakers, Tamal Ray, Chuen-Yan ‘Yan’ Tsou, and Michael Chakraverty all entered the tent as aspiring bakers and left as gay icons.

Let’s not forget the presenters…

GBBO has seen a selection of presenters over the years, plenty of whom have been members of the LGBTQ+ community, proudly flying the flag in the famous tent.

We started off with the unforgettable Sue Perkins, then had the hilarious Sandi Toksvig and, more recently, Matt Lucas, who joined the cast in 2020.

Perkins was loved for her hilarious banter with co-presenter Mel Giedroyc from 2010 to 2016. She left the show when it moved to Channel 4 from BBC.

Toksvig then had her own fair share of memorable moments. Who could forget the time she accidentally destroyed Krishnan Guru-Murthy’s cake during Celebrity Bake Off and very quickly fled the crime scene?