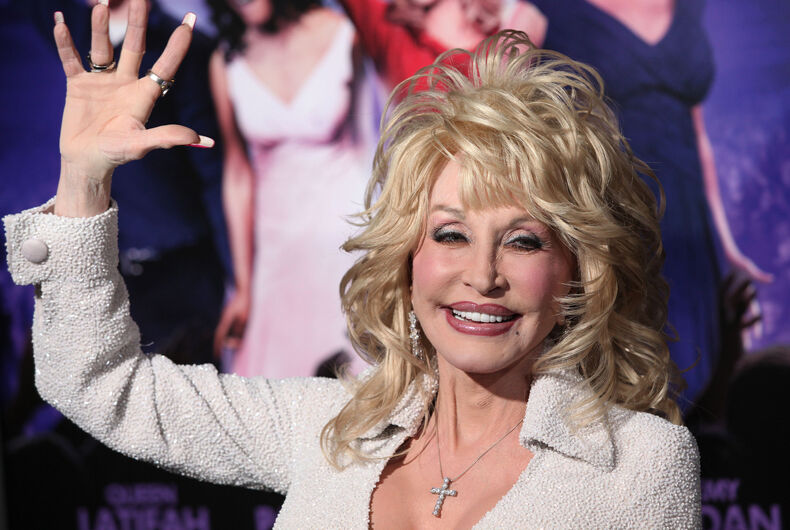 Last year, country music superstar Dolly Parton was named one of Time’s 100 most influential people. Included in the issue was an essay about her influence penned by Miley Cyrus in which Cyrus wrote that Parton “has diligently celebrated the queer community” as one of the admirable things that has made her an icon.

“People look to Dolly for guidance, and she knows that. She wears that responsibility with the same grace and pride she rocks a two-piece Nudie suit,” Cyrus added.

Parton, a country music legend, has long been known as a humanitarian. She gave a million dollars to help fund coronavirus vaccine research that helped develop the vaccine produced by Moderna.

During the pandemic, she has also read books to kids on social media to help comfort them. Parton also has Dolly Parton’s Imagination Library, an initiative of the Dollywood Foundation to support youth literacy that gives books to children from low-income families.

This year, Parton continued to surprise and delight – and as always, she made sure to show her love for her LGBTQ+ fans.

These are five times she made us smile just by being herself.

When she announced she was paying for her employees’ educations

In February, Parton announced that her theme park, Dollywood, will cover 100 percent of the cost of a college education for employees. This included both tuition and books, as well as other miscellaneous fees.

Dollywood already provided free meals for employees during their shifts and covered some of the child care costs of employees with kids. Dollywood staff also have access to the Dollywood Family Healthcare Center.

“When our hosts feel appreciated and are given opportunities like this, they feel cared for and they can pass that feeling on to their guests,” said Wes Ramey, a Dollywood Co. spokesperson.

When she starred in a Taco Bell musical

This year, Parton appeared in Mexican Pizza: The Musical, a satirical TikTok musical recounting the “harrowing” story of Taco Bell lovers who fought to get the Mexican Pizza back on the fast-food restaurant’s menu.

Parton first revealed her love of Mexican pizza in a February 2022 interview with Business Insider.

“I like soft-shell tacos,” Parton said. “I like the others, but they fall apart so bad, especially if you’re riding around,” hinting at how, as a musician, she spends a lot of time on the road. “So I always get a Taco Supreme, with the sour cream and all that, in the soft shell. I love that. And I get an order of rice and beans. And I get mild sauce. I don’t like to get it too hot and ruin everything.”

She then added, “They used to make a little — I think they still do it; one of the restaurants — they make a little Mexican pizza, which is also good. I love that.”

When she started a dog apparel line called Doggy Parton

“Puppy Love was my very first record and six decades later my love for pets is stronger than ever,” Parton said in a video announcing the launch of Doggy Parton in September.

The line includes toys, clothing, accessories, and more, all of which she said have “a little Dolly flair.” There are sparkly outfits, furry cowgirl hats, butterfly collars, and Dolly-themed dog toys, such as a microphone and a high heel.

And in true Dolly fashion, part of the proceeds are donated to the animal rescue organization Willa B. Farms.

There is even a blonde wig, modeled in a hilarious video by a dog named Billy the Kid, who Parton fondly calls her “god dog.” In the video, Billy the Kid models the wig while Parton blow-dries it and a recording of her singing “I Will Always Love You” plays in the background.

I will always love you, Dolly Mama @DollyParton 💘 Thank you for my @doggyparton wig and accessories. Link to the full collection in bio now!https://t.co/2xHhIxJhyz pic.twitter.com/0PRonQQzQP

When she announced a rock album

When the Rock and Roll Hall of Fame nominated Parton as one of its 2022 inductees earlier this year, she made headlines for initially declining the honor. “Even though I am extremely flattered and grateful to be nominated for the Rock & Roll Hall of Fame, I don’t feel that I have earned that right. I really do not want votes to be split because of me, so I must respectfully bow out,” she wrote in a March Twitter post.

Parton changed her mind, however, and even went so far as to promise fans a rock album in the near future. At the Rock Hall induction ceremony last month, where she performed alongside out Judas Priest frontman Rob Halford, she debuted a new song that will reportedly be included on the album.

On The Tonight Show Starring Jimmy Fallon, she told the host that she expects to release Rock Star next fall. She said that in addition to a few original songs, she’ll be covering Prince’s “Purple Rain,” the Rolling Stones’ “(I Can’t Get No) Satisfaction,” Led Zeppelin’s “Stairway to Heaven,” and Lynard Skynard’s “Freebird.”

When she joined TikTok and shouted out her queer fans

Parton snuck this one in at the last minute, making her TikTok debut at the end of the year and posting a video mashup of some of the many fan tributes to her hit song “9 to 5.” The video included trans TikTok star Dylan Mulvaney, as well as four drag queens, Shuga Cain, Jan Sport, Trixie Deluxxe, and The Vivienne.

“Looks like I missed a lot!” Parton wrote. “You all are so creative. Now that I’m here, tag me!”

It seems TikTok will be the place to go to find out what Parton will bring us in 2023.

Looks like I missed a lot! You all are so creative. Now that I’m here, tag me! ❤️ #heyitsdolly #dollytok

Wrestler Anthony Bowens was terrified before coming out. This year he made history.