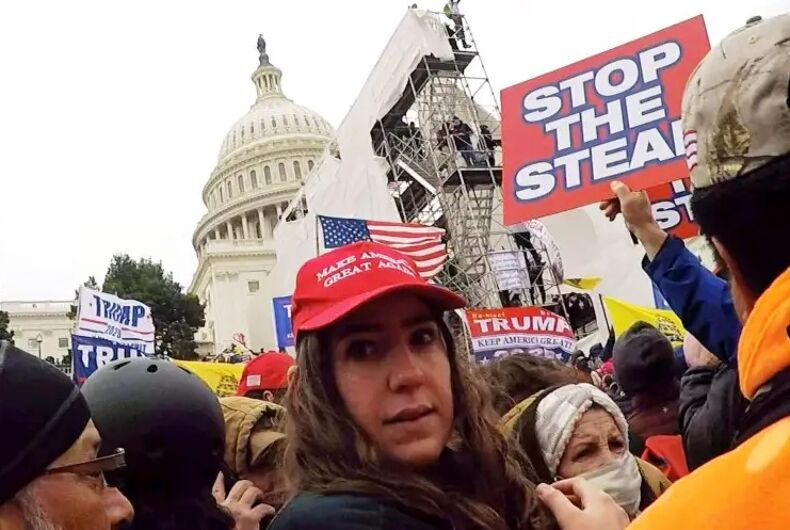 A woman who resembles Chaya Raichik during the Jan. 6, 2021 Capitol RiotsPhoto: U.S. government

Chaya Raichik, who goes by LibsofTikTok on social media, may have attended the January 6, 2021 protests which resulted in an insurrectionist riot at the U.S. Capitol, according to web sleuths.

After Raichik showed her face in a recently released and extremely bigoted interview with Fox Nation host Tucker Carlson, the Twitter account of a self-described “independent journalist” posted a video showing a woman in a red cap who facially resembles Raichik.

In less then 5 hours after the Tucker interview they were able to identify Chaya Raichik's (LibsOfTikTok) face & attire while on the Capital Grounds on Jan 6th.pic.twitter.com/4o5sc4bpj9

Another commenter that the woman in the video wore a ring on her left-hand ring finger that seems to match one worn by Raichik on the same finger during her interview with Carlson.

This genius wore the same ring on Tucker Carlson as she did on January 6th 😂https://t.co/FL0kebzNca pic.twitter.com/44YZYHpdns

A Twitter user, @travisbrown, then posted a screenshot alleging to show different account names that Raichik used before changing her account to “Libs Of Tik Tok.”

Pro-tip: if you want to run a viral moral panic account for the worst people on earth and stay anonymous, maybe start from scratch instead of doing whatever the fuck this is. https://t.co/OjzuXGQdOg pic.twitter.com/imsKPdjN4a

One of these account names, @shaya_ray, made several posts on January 6, 2021. Two posts had videos taken from outside of the Capitol, including one that allegedly showed the use of tear gas. Another claimed that law enforcement outside the Capitol had shot “rubber bullets,” adding, “1 hit right next to me.”

Another @shaya_ray post from December 2021 wrote, “I am taking off work to come support Trump. Every single supporter matters. Don’t think that just because you are an average citizen without a twitter following that you don’t matter. EVERY SINGLE PERSON MATTERS. We owe it to Trump who hasn’t stopped fighting for us!”

Update: I just found deleted tweets in which @libsoftiktok (“Chaya Raichik”) claims to have participated in the January 6 insurrection. pic.twitter.com/IPZ0QOUQBT

There is no evidence that Raichik ever entered the Capitol on the day of the riots.

Raichik has used her account, @LibsOfTikTok, to accuse teachers, parents, activists, and doctors of “sexualizing” kids through LGBTQ+ media content, drag queen performances, and gender-affirming medical care for transgender youth. Her past social media posts have made similar allegations, leading to death threats against medical professionals and veterinarians, armed protesters at drag events, and the harassment and firing of LGBTQ+ allied teachers.

The January 6, 2021 Capitol riots occurred after former President Donald Trump, the most anti-LGBTQ+ president of all time, encouraged his followers to march to the Capitol to protest the congressional certification of Trump’s election loss to then-President-elect Joe Biden. The ensuing protest culminated in a violent insurrectionist riot.

While ransacking the Capitol, the rioters shattered windows while trying to access congressional chambers, smeared feces in the hallway, and stole computer equipment, potentially constituting a national security breach.

Five times Pete Buttigieg made us smile this year