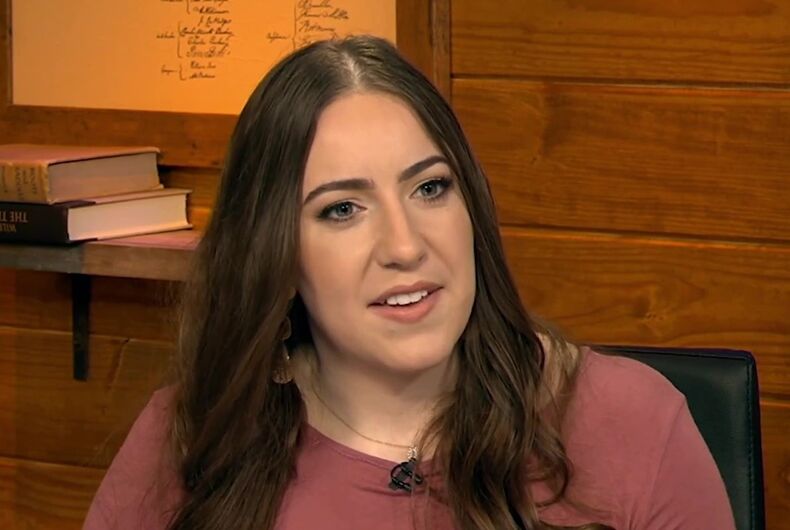 Chaya Raichik, who goes by LibsofTikTok on social media, showed her face and called the LGBTQ+ community “evil” “groomers” in her first-ever televised interview with Fox Nation host Tucker Carlson.

She also mentioned that Florida Gov. Ron DeSantis (R) invited her and her family to stay in a guest house at the governor’s mansion after her identity was made public by Washington Post reporter Taylor Lorenz earlier this year.

After stating that “the hatred that the left has and their violent nature” required that she hide her face until now, Raichik said of LGBTQ+ people and their allies, “They’re just evil people and they want to groom kids. They’re recruiting.”

“The LGBTQ community has become this cult and it’s so captivating, and it pulls people in so strongly, unlike anything we’ve ever seen,” Raichik told Carlson. “They brainwash people to join and they convince them of all of these things, and it’s really, really hard to get out of it.”

During their hour-long interview, Raichik accused teachers, parents, activists, and doctors of “sexualizing” kids through LGBTQ+ media content, drag queen performances, and gender-affirming medical care for transgender youth. Her past social media posts have made similar allegations, leading to death threats against medical professionals and veterinarians, armed protesters at drag events, and the harassment and firing of LGBTQ+ allied teachers.

Harvard Law School instructor Alejandra Caraballo commented on the interview via Twitter, writing, “This is one of the most bigoted interviews I’ve ever heard.” Others criticized Fox News for airing an interview that would inevitably encourage violence against the LGBTQ+ community.

Chaya Raichik went on Tucker Carlson and said the "LGBTQ community has become this cult… It's extremely poisonous." She later says "They're just evil people, and they're out to groom kids. They're recruiting."

This is one of the most bigoted interviews I've ever heard. pic.twitter.com/0tVe9WONOH

Anti-LGBTQ+ Rep. Marjorie Taylor Greene praised the interview on Twitter, writing, “If everyone stood up against the radical disgusting immoral left like she does, we wouldn’t have the problems we have and our kids would be safe from indoctrination and grooming.”

In the past, Carlson has called for violence against LGBTQ+ allies, saying that “neighborhood dads” should “mete out instant justice to anyone who even thought about sexualizing their kids.” He also claimed that gender-affirming doctors are “castrating” kids, even though genital surgeries aren’t performed on trans and non-binary youth.

Carlson’s 1991 yearbook from his senior year at Trinity College in Hartford, Connecticut listed him as a member of the “Dan White Society”, a group that ostensibly honored the coward who assassinated gay politician Harvey Milk. Carlson also once bragged about beating up a gay man who approached him in a public bathroom.

The six most thought-provoking gay films of the year