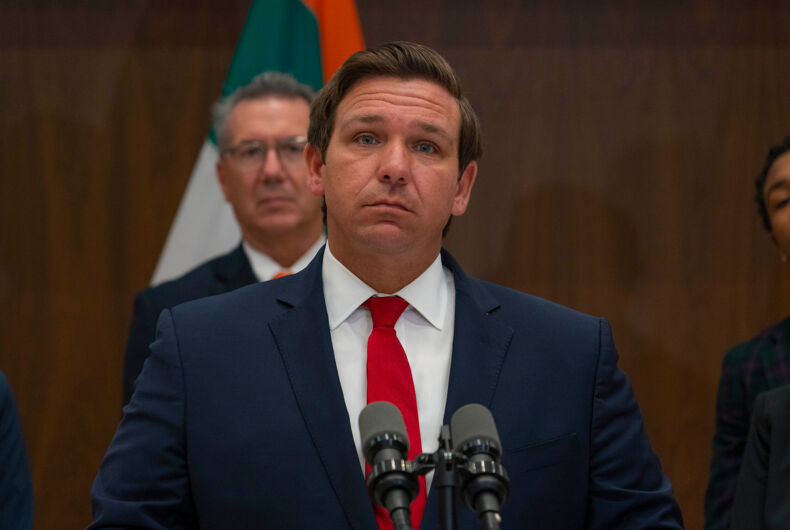 Following his resounding re-election victory, Florida Gov. Ron DeSantis (R) is being heralded as the GOP’s best hope to rescue itself from the clutches of Donald Trump. He promises all the “own-the-libs” performances that the base loves without any of Trump’s impulsive downsides.

A recent Wall Street Journal poll showed DeSantis leading Trump in a hypothetical match up 52% to 38%. Meanwhile, outlets like Fox News and the National Review are canonizing DeSantis in an effort to steer voters away from Trump toward a presumably more electable choice.

But is DeSantis really likely to emerge as the party’s savior? There are five reasons to think not.

According to people who know him, DeSantis comes from the Ted Cruz school of charisma

“I’d rather have teeth pulled without anesthetic than be on a boat with Ron DeSantis,” Mac Stipanovich, a Tallahassee lobbyist, told The Atlantic. A Vanity Fair profile described him as “a mix of extreme arrogance and painful awkwardness” loathed by other Republicans. He has the hatred of his own party in common with Cruz.

Say what you will about Trump, but he was never boring. He galvanized his followers. By contrast, DeSantis does not come across as someone you’d want to hang out with, even if you agreed with him. Carlos Curbelo, a former GOP Congressman who served with DeSantis in the House, said he “has this robotic quality that he has to shed.”

That X Factor has been the end of many an “inevitable” nominee before. Remember Jeb Bush? He was another Florida governor with a perfect resume and lots of money behind him. He also had zero personality. In 2016, he disappeared so fast you hardly knew he was ever there. Which brings us to another of DeSantis’ flaws.

In a debate with Donald Trump, DeSantis will be unarmed

Trump doesn’t debate his opponents. He eviscerates them. Insofar as anyone remembers Jeb Bush, it’s because Trump branded him as “low energy” during the 2016 primary debates.

As smart as DeSantis is, he’s not good with the snappy comeback. He’s a bit of a sourpuss and doesn’t think well on his feet, a bad combination in a debate, and especially in a debate with Trump. “My sense is that Trump would gut DeSantis with a dull deer antler,” Stipanovich told The Atlantic.

The debate factor leads to another problem for DeSantis.

It’s not likely to be a two-way race between Trump and DeSantis.

Trump has a hard-core base of supporters. Then there’s everyone else. That’s how he won in 2016. The field was crowded: Ted Cruz, Marco Rubio, Chris Christie, Jeb Bush, Herman Cain, Carly Fiorino, Jon Huntsman, John Kasich. Trump won just enough votes early on to dispatch the weakest candidates, while the establishment was never able to coalesce around a non-Trump alternative.

If Trump runs in 2024, the field may not be quite as crowded, but it won’t be a two-person race either. Mike Pence certainly looks like he’s running. Former UN Ambassador Nikki Haley is hinting at it, as is former Secretary of State Mike Pompeo. Then there are the never-Trumpers: Maryland Gov. Larry Hogan and Rep. Liz Cheney.

If Trump looks vulnerable (i.e., he’s indicted), DeSantis may just be the first of many challengers. If that’s the case, Trump can depend on his MAGA followers and let the rest of the crowd battle it out, just like he did in 2016.

The big premise of a DeSantis candidacy is that he offers the same advantages of Trump without the baggage. But the policies themselves are baggage. Republicans are blaming their poor showing in the midterms on lousy candidate quality (thanks to Trump), and while that’s true to an extent, the party’s descent into far-right fever swamps played a bigger role in its defeat.

If anything, DeSantis is doubling down on the extremism. There’s Florida’s “Don’t Say Gay” law and his escalation of anti-LGBTQ+ rhetoric, which isn’t going to play well in swing states like it did in Florida. Then there’s DeSantis’s enthusiastic embrace of anti-vax ideology. That’s not the kind of thing that’s going to win over suburban moderates.

Nor are the grandstanding media stunts that go with these announcements. They are all too reminiscent of Trump and one of the reasons why voters turned to no-drama Joe Biden in 2020.

DeSantis is even more extreme than Trump

All of DeSantis’ posturing – the decision to go after Disney and ask a grand jury to investigate Covid vaccine manufacturers – is an attempt to run to the right of Donald Trump. Yes, it’s an attempt to outdo Trump’s excesses by being even more excessive. After voters rejected that in 2020 and again with Trump wannabes in 2022, why does DeSantis think it will succeed in 2024?

More importantly, with everything else he has against him, why do other Republicans think he will succeed? Once again, delusion proves easier than introspection.