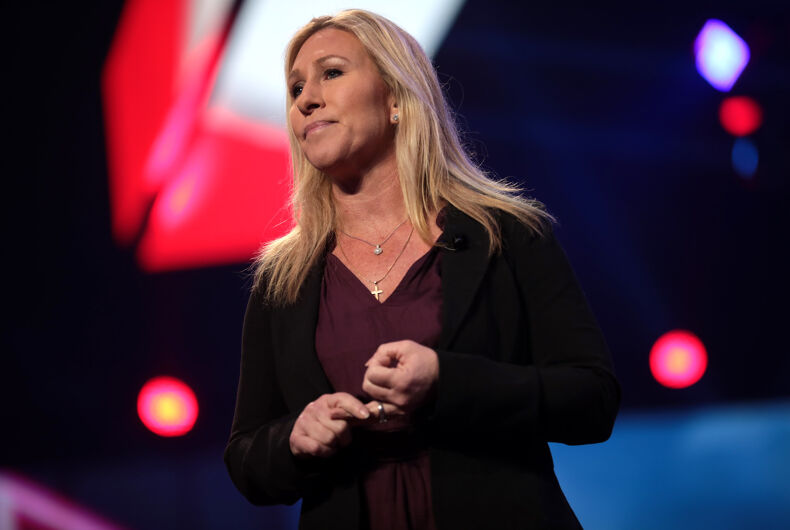 Numerous Republican Congressmembers who have accused LGBTQ+ people of sexualizing children just voted against a bill that would help the actual victims of child sex abuse.

The bill, entitled Respect for Child Survivors Act, was developed with input from child welfare groups to address the mistreatment that child witnesses sometimes face during investigations of their own abuse.

The bill requires the FBI to form multi-disciplinary teams to investigate child sex abuse cases in a way that ensures accountability and transparency without re-traumatizing victims and their families. The teams would include “investigative personnel, mental health professionals, medical personnel, family advocacy workers, child advocacy workers, and prosecutors,” Newsweek reported.

“It takes tremendous courage for young victims of sexual assault to tell their story and overcome the fear that they may not be taken seriously, may be ignored, or may be wrongfully blamed,” said Cornyn. “To avoid re-traumatizing victims during the investigation process, it’s imperative we give these individuals the support they need to ensure survivors feel respected during the interview process and abusers are prosecuted to the fullest extent of the law.”

However, 28 Republicans voted against the bill.

Those Republicans include Reps. Lauren Boebert (CO), Marjorie Taylor Greene (GA), Louie Gohmert (TX), Paul Gosar (AZ), and Rick Crawford (AR). All of these Republicans have opposed the expansion of LGBTQ+ civil rights and many have accused the LGBTQ+ community of sexualizing or “grooming” kids.

“Grooming” is a term for attempting to sexually abuse children; conservatives have used it to describe any mention of LGBTQ+ identities in front of children as a way of associating pedophilia with LGBTQ+ people, harkening back to the old negative stereotype.

In June, Boebert accused queer-inclusive teachers of “grooming” kids with educational flashcards showing a pregnant man on one of the cards.

Responding to Wiener’s tweet, Greene wrote, “Pass my Protect Children’s Innocence Act to stop communist groomers like this from using state government power to take children away from their parents to allow a for-profit medical industry to chop off these confused children’s genitals before they are even old enough to vote,” she said.

Her bill would ban gender-affirming health care for transgender minors at the federal level, which she has compared to pedophilia.

In October, Gohmert co-sponsored a bill called the “Stop the Sexualization of Children Act” which would ban any entity that receives federal money from talking about sexual orientation or gender identity to children under the age of 10.

In 2016, Gosar suggested an amendment to bar transgender people from using public restrooms that align with their gender identity in U.S. governmental buildings. Transphobic politicians often say that such bills are necessary to prevent trans people from attacking women and children in public toilets, something that rarely ever occurs.

It’s notable that these politicians, who have spent the year making so much noise about LGBTQ+ people supposedly “grooming” children, never speak as loudly against widespread child sex abuse in the Christian church, nor do they partner with organizations that actually oppose such abuse or child sex trafficking.

And they weren’t willing to even vote for a bill to address child sex abuse that got broad bipartisan support.

Welcome to the Super Age. The first person to live to be 150 is likely already alive