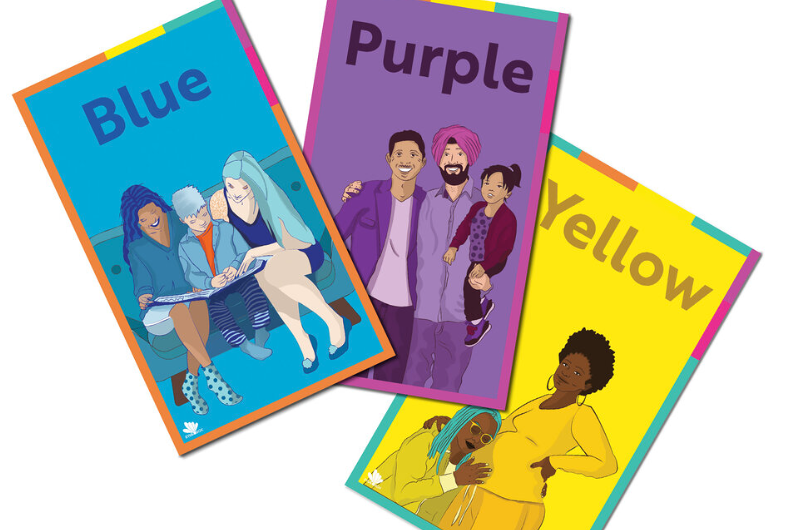 The Pride flashcards that Boebert said were "grooming our kids."Photo: Screenshot/byusbox.com

Rep. Lauren Boebert (R-CO) is up in arms because a teacher in North Carolina showed kids Pride flashcards.

The gun-nutty Congresswoman took a break from defending the right to own any type of gun in the wake of the mass shooting in Uvalde, Texas to accuse “the Left” of “grooming our kids” because of the flashcards.

“We went from Reading Rainbow to Randy Rainbow in a few decades,” Boebert tweeted, referring to the out comedian known for his political parodies, “but don’t dare say the Left is grooming our kids!”

We went from Reading Rainbow to Randy Rainbow in a few decades, but don’t dare say the Left is grooming our kids!

Boebert was referring to a story that conservative news sources were flogging yesterday about a preschool teacher in Fuquay-Varina, North Carolina, who used flashcards in class that were LGBTQ themed. One of the flashcards that conservatives were particularly offended by showed a couple where the man is pregnant.

The school’s principal said that the flash cards were not a part of the school’s approved curriculum and “immediately took possession of the cards, contacted the WCPSS area superintendent, and engaged human resources.”

“I am grateful that a concerned constituent reached out and that this issue is being addressed in a swift and professional manner by Ballentine Elementary School,” said state Rep. Erin Paré (R), who caused the uproar in the first place after a constituent emailed her a picture of the flashcards.

Other flashcards in the set, which are illustrated by Pakistani Canadian artist Zainab’s Echo, show a gay couple of color with a kid, a Black lesbian couple where one woman is pregnant, and two men where one is in a wheelchair. They also include an interracial couple with a child and a single parent with a pink ribbon tattoo.

The drawings are appropriate for all ages – the characters depicted are clothed and aren’t engaging in any sexual acts – so it appears that Boebert is only accusing “the Left” of child molestation because LGBTQ people are shown on the flashcards.

The flashcards were sold online and are currently unavailable.

Sweetie your homophobia is showing…and for the record, I’ve had my tubes tied. 💅🏻 https://t.co/uOJWDARiPu

As an aside, Randy Rainbow would be an amazing teacher. Who agrees?

Grooming kids is putting a gun in their hands for a Christmas card.

An odd way to tell us you're a @RandyRainbow fan.

If I remember correctly, wasn’t your husband a flashcard?