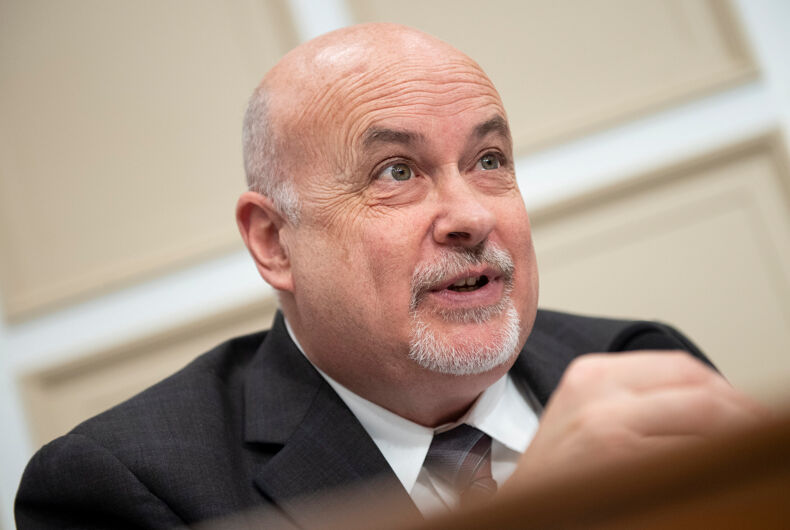 No sooner had the trekkers gone to sleep for their first night in the wild than they woke up to machine gun fire and hand grenades exploding.

“We had always heard about all this activity,” out Rep. Mark Pocan (D-WI) told LGBTQ Nation, laughing at the thought of walking right into the danger zone, “and here I was suddenly experiencing it firsthand.”

When the trekkers arrived at Los Katíos National Park, he said “the first thing we noticed was no one else was there, other than the families who worked there.” Now Pocan was huddled under a bunk bed in the tiny house they occupied as a firefight raged outside for over an hour.

“We had the paramilitaries on the river, and the guerrillas on the land, and we were kind of in between. And after that was done, the guerrillas kind of had control of the land where we were.”

Welcome to the jungle.

It was Christmas vacation in 1996 and future Rep. Pocan had traveled to South America for the adventure of a lifetime: a trek through one of the last genuinely isolated places on Earth, the forbidding Darién Gap on the border between Panama and Colombia.

Pocan had been fascinated by the area for years. It’s where the Pan American Highway stops midway on its run from Prudhoe Bay, Alaska to Tierra del Fuego in Argentina, a jungle so dense and climate so wet that the 19,000 mile-long ribbon of concrete just stops at its doorstep and picks up again 66 miles later.

The Madison lawmaker, in local government at the time, had known about the Jeep and camper treks along the fabled highway and had read one account, Road Fever, about a Guinness World Record for fastest crossing.

Pocan didn’t have 24 days for that trip, but he did manage to find a British tour outfit offering a trek through the Darién Gap in under a week. “I found a company out of Great Britain that did a backpacking trip through that little part of it,” Pocan said, “and I thought, ‘Oh, what a great way to do that first, and then someday I’ll catch the Jeep part of the trip.”’

The group met in Cartagena, Colombia just north of where they’d embark on their trip into the hot, wet jungle. Pocan was the only North American in the collection of nine mostly European trekkers, plus a couple from New Zealand.

Their guide was a woman from Amsterdam, whom Pocan described as “like a Crocodile Dundee sort of person.” Later in the trip, “she literally would dive into this little stream, then come back with a crab in each hand.” In Cartagena, she had them sharpen machetes. “‘We need them for the trek,'” she told the group.

Pocan was familiar with the area not only from his adventure research but because his hometown of Madison was a sister city to Apartado, Colombia, just miles from where he was now, at the foot of the Darien Gap. He and Sen. Tammy Baldwin (D-WI), then both supervisors in Madison, helped establish the civic partnership, and he was aware of guerrilla and paramilitary activity in the region. “It’s a very war-torn area,” Pocan said.

It has been for decades.

Since the 1990s, groups, including Colombia’s FARC guerrillas and right-wing paramilitaries, have found cover in the isolated, lawless region; rebels, drug smugglers, and weapons traffickers operate freely. In 2000, a pair of orchid-hunting Britons were kidnapped and held hostage for nine months by FARC. In 2013, the same group killed a 26-year-old Swedish tourist they suspected of being a spy.

“We’ve always dealt with the stories of paramilitaries and guerrillas and the military and drug dealers” in the area, said Pocan.

After sharpening their blades, the trekkers set off.

The trip would run south to north through the Gap, starting with a boat trip on the Atrato River to the Los Katíos National Park, a protected area that straddles the Panama-Colombia border. The trek would reveal some of the most diverse and unique flora and fauna on the planet – and some of the most deadly. Brazilian wandering spiders, black scorpions, ticks, bot flies, spiked palm trees, and water laden with viruses and parasites lay ahead, plus the threat of trench foot in one of the wettest places on the planet.

But first, the guerrillas had to release them.

“They didn’t treat us poorly at all,” said Pocan. On the contrary: the trekkers, who happened to be in the wrong place at the wrong time, were now prized cover against paramilitary forces attacking the guerrillas. “They saw it as an opportunity because whenever you would shoot people from other countries or blow them up, that would create an international incident.”

“At the very beginning, half the families left with all the boats,” recalled Pocan, “so we were there.”

For five days and nights, and with a lot of magic.

“I’ve been doing magic since I was eight,” said Pocan. “When you get in situations where if there’s a language barrier, especially for kids, you can do some magic and it connects with people.”

He hadn’t packed for the occasion, but Pocan was carrying cards, and coins were always handy. “They would bring all kinds of people by and I was doing that for them throughout the several days,” Pocan recalled. “It was in our best interest to be as friendly as possible.”

The group had minders for their unexpected detention. “The guerrillas basically had two women that stayed with us all the time. We got friendly-ish with them. We had one woman giving them haircuts, and our leader was amazing. Within the first couple of hours, she was hugging them, but also they had Uzis and grenades all the time, too, so.”

“There was one woman from Finland,” Pocan remembered. “She was reading a book, and I asked her how the book was, and she’s like, ‘I haven’t turned a page in hours.’ She was a little freaked out.”

On the fourth night, Colombian military helicopters circled, and the next day the guerrillas moved on, after first giving the trekkers a slab of beef from one of their harvested steers.

Asked if he ever feared for his life on the trip, Pocan said only once. The group decided they would continue their trek north after the guerrilla interlude and, at one point, found themselves with a pair of boatmen on a river in rough weather.

“We had these two boats, with these guys on each end of the boat, taking us through this incredibly rough water. And they were passing the aguardiente liquor back and forth, rather drunk as they were doing all of this, and you’re just looking at these waves going, ‘There’s no way we should be out on this water.’ That’s where I was most sure we’re gonna be crashing against the rocks.”

LibsofTikTok creator Chaya Raichik may have been present at the January 6 U.S. Capitol protest