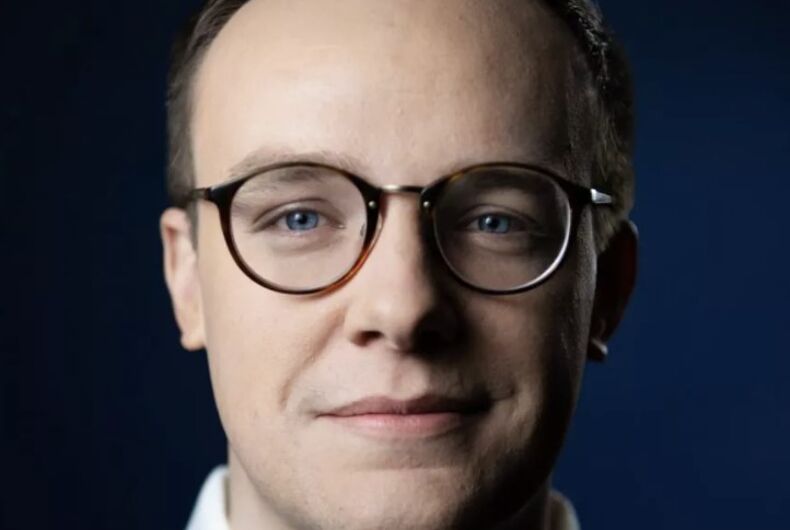 Chasten Buttigieg may have risen to fame for being married to then-Mayor and now Secretary of Transportation Pete Buttigieg, but he has certainly become a celebrity in his own right, mostly for his LGBTQ+ activism and outspokenness when it comes to fighting for LGBTQ+ rights.

This year, as attacks on the LGBTQ+ community continued to intensify, Chasten Buttigieg did not stop speaking out and using his platform to celebrate LGBTQ+ love and to call out haters who spread dangerous anti-LGBTQ+ rhetoric.

Here are five times he stood up for LGBTQ+ people this year.

When he celebrated the sanctity of his marriage

Just before the Senate voted to pass the Respect for Marriage Act, Buttigieg penned a heartfelt blog post and series of tweets detailing the beauty of his marriage with Secretary of Transportation Pete Buttigieg.

Beside a photo of two high chairs and a messy counter filled with empty plates, bibs, boogie wipes, sippy cups, and toothbrushes, Chasten wrote that staring at “the aftermath of our chaotic morning together” is “what marriage is to me.”

He detailed the family’s “hurried but hilarious breakfast full of giggles and music” as Pete danced around the room, getting ready for work while his twins ate.

He detailed the love his marriage has fueled and the preciousness of his union, and he voiced his hope that the Senate would” listen to over 70% of Americans and vote to protect families like mine and the unions that make us all better Americans.”

To him, he added, marriage equality means “the right to have a shoulder to lean on at the end of the day” and “the promise of hard work for your partner, your kids, and for us, our country.”

When he helped Tucker Carlson understand what coming out is

In November, Buttigieg hit back at Tucker Carlson after the Fox News host bizarrely chastised his husband for “lying” about his sexuality.

Pete Buttigieg “always wants to talk about identity!” Carlson squawked on his show as the chyron blared, “PETE: ANTI-GAY VICTIMHOOD NARRATIVE? COUNT ME IN.”

“And the funny, ironic thing is, until just a few years ago, Buttigieg wouldn’t even admit that he was gay!”

While talking to CNN’s Don Lemon, Chasten explained using small words that “my husband served under Don’t Ask Don’t Tell,” the policy that banned gay and bisexual servicemembers from serving in the military openly.

“I love my husband deeply,” he added. “I know he’s a committed public servant, and he has everyone’s best interests at heart.”

When he stood up to hateful Senators

During Supreme Court Justice Ketanji Brown Jackson’s confirmation hearings, Buttigieg clapped back at Republican lawmakers who used the moment as an opportunity to reveal their disapproval of marriage equality.

Sen. John Cornyn (R-TX) described Obergefell v. Hodges, the ruling that legalized marriage equality, as an “edict” that was “a dramatic departure from previous laws.” Cornyn went on a lengthy rant about the evils of Obergefell, which “overrules the decisions made by the people” and which Cornyn compared to the Dred Scott decision upholding slavery.

“We get it, Senator Cornyn; you’re still mad at gay marriage for taking away none of your rights,” Buttigieg tweeted in response.

When he called out Lauren Boebert’s hypocrisy

In June, Buttigieg gave Rep. Lauren Boebert (R-CO) a piece of his mind after her recent “shout out to dads across America,” calling out the hypocrisy of Boebert’s Father’s Day tweet after she slammed Pete Buttigieg for taking time off to be with his newborn son in the hospital this past fall.

“Our two-month-old son was on a ventilator at the children’s hospital when you attacked my husband for being with his family,” Chasten tweeted. “I watched him take calls and Zooms from our hospital room all day, managing crisis after crisis while our son’s heart monitor beeped in the background.”

Boebert was one of a chorus of conservatives who criticized the former Democratic presidential candidate for taking paternity leave after the birth of his adopted twins last October. The criticisms were frequently peppered with homophobic rhetoric.

“Mayor Pete was on a 2-month maternity, paternity, whatever the heck you want to call it leave,” Boebert said at the time. “The guy was gone. The guy was not working, because why? He was trying to figure out how to chest feed.”

When he called out Lauren Boebert’s hypocrisy again

In the aftermath of the Club Q shooting that killed 5 people in Colorado Springs, Colorado, Buttigieg again slammed Boebert after her tone-deaf statements.

“The news out of Colorado Springs is absolutely awful,” she wrote. “This morning the victims & their families are in my prayers. This lawless violence needs to end and end quickly.”

She made these comments after spending her first term in Congress attacking LGBTQ people and portraying them as a danger to children and opposing all gun control legislation.

Buttigieg wasn’t having it.

“You encourage this type of hatred,” he responded. “Get off Twitter and start looking inward.”

In a separate tweet, Buttigieg explained his position more: “Republicans continue to run on and spread anti-LGBTQ ideology and hatred while refusing to lift a finger on gun violence. This is preventable, but only if they start seeing LGBTQ people as equals, and themselves as leaders.”