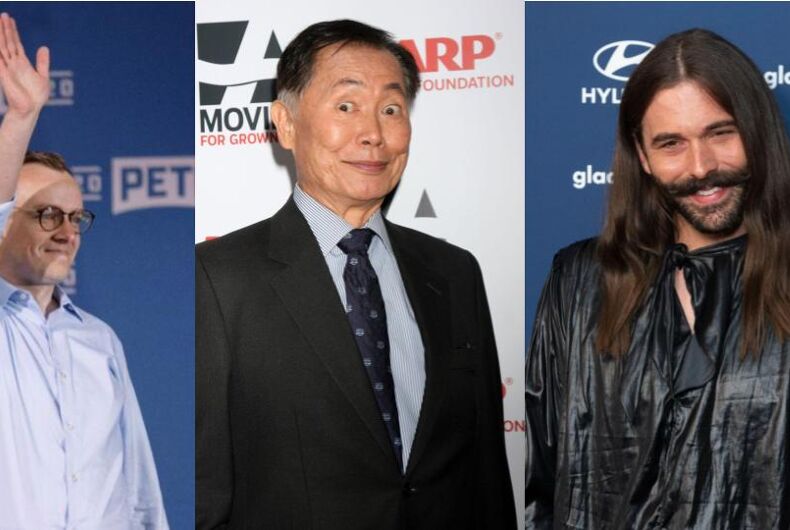 This week, as political attacks on queer and trans people dominated the national discourse, LGBTQ celebs took to Twitter to tell it like it is.

Chasten Buttigieg clapped back at Republican lawmakers who used the confirmation hearings for Judge Ketanji Brown Jackson as an opportunity to reveal their disapproval of marriage equality.

We get it, Senator Cornyn; you're still mad at gay marriage for taking away none of your rights.

Meanwhile, George Takei brought disappointed dad vibes with his takedown of the GOP’s distraction tactics, calling on Americans to “cut this crap” and focus on the real problems facing the world. Hint: it’s not trans kids in sports.

There are real problems we face. A war by Russia. Devastating climate change. A deadly pandemic.

What aren’t problems? Trans kids in sports. Discussions of race in our history textbooks.

Today’s GOP is nothing but fear and distraction. Focus, America. Cut this crap.

Queer Eye‘s Jonathan Van Ness called out the “bullshit” hypocrisy of those who call for civility while demeaning transgender people like swimmer Lia Thomas.

Typical @FoxNews bullshit.
Here a father says everyone should be
civil, then proceeds to misgender Lia,
deadname Lia all while saying she
shouldn't exist where she does. That is
not civil. Lia has been a top competitor her whole swimming career & nobody can take this win from her pic.twitter.com/fq1NaY6UbX

I wish housing affordability was TRANSGENDER so that #DeSantis would be obsessed with it.

Public figure or not, we could all turn up the gay. Lil Nas X needs to know how to identify his people.

straight men are expressing themselves too much now. it so hard to tell who is gay. i need my fellow homosexuals to become gayer.

Clarence Thomas’ wife doesn’t believe in democracy. Does her husband?