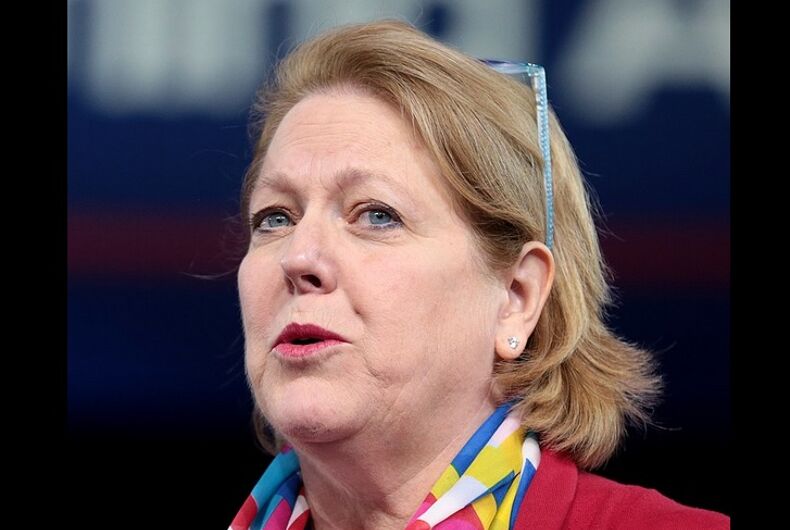 Ginni Thomas, the wife of Supreme Court Justice Clarence Thomas, has finally been attracting some attention for her ultra-conservative views. Mostly, the focus has been on the extraordinary conflict of interest she represents for her husband, and she hands out awards to people appearing before the court and advocates for issues her husband will be deciding on.

But this week, Thomas surprised even her fiercest critics by engaging in what can only be called treason. In a series of emails released to the House committee studying the January 6th insurrection at the Capitol, Thomas called for the overturning of the election results with a religious fervor second only to Trump himself.

“Help This Great President stand firm, Mark!!!,” Thomas wrote to White House Chief of Staff Mark Meadows. “You are the leader, with him, who is standing for America’s constitutional governance at the precipice. The majority knows Biden and the Left is attempting the greatest Heist of our History.”

Thomas had previously admitted to attending the pro-Trump rally on January 6, but said she had “no role” in planning it and left before attendees stormed the Capitol.

But that bland admission wildly minimized just how involved Thomas was in pushing the lie that the election was stolen. Within days of the election, she was telling Meadows “Do not concede. It takes time for the army who is gathering for his back.”

Thomas was also promoting Sidney Powell, the loose cannon attorney who along with Rudy Giuliani led Trump’s legal team brigade and became a punchline for her “release the Kraken” shenanigans.

The texts are disturbing, all the more so because there are undoubtedly more than the 29 that the committee has. (Meadows has since stopped cooperating with the committee.) But what is especially disturbing is the worldview that Thomas and Meadows display.

It’s not just that Thomas is a far-right agitator. She’s advocating for a special kind of ultra-right philosophy: Christian nationalism.

Overturning a legitimate election was not a political cause for Thomas and people like her. It was a theological one.

“This is a fight of good versus evil,” Meadows wrote to Thomas. “Evil always looks like the victor until the King of Kings triumphs. Do not grow weary in well doing. The fight continues.” (Meadows is a fervent evangelical.)

Thomas responded, “Thank you!! Needed that! This plus a conversation with my best friend just now… I will try to keep holding on. America is worth it!”

Sarah Posner, a journalist who has documented the deep connection between the Christian right and Trumpism, told the Washington Post that the exchange “demonstrates how the pair saw themselves as soldiers in this spiritual battle from which they should never retreat.”  They were looking to build a country not based on democracy but on their particular version of Christianity.

The fact that someone embedded at the very heart of the political establishment–the wife of a Supreme Court justice–not only believes in bizarre conspiracies but actually advocated for undermining a free and fair election is mind-boggling. It also indicates just how far the GOP political establishment has veered from any sense of normalcy and ethics.

Speaking of ethics, Justice Thomas has besmirched the entire Supreme Court by refusing to recuse himself from everything his wife has touched. That includes Trump’s challenge to the election, which Justice Thomas was the only justice willing to consider.

In any other job, Thomas would be facing a reprimand at a minimum and perhaps a pink slip. Of course, the Supreme Court is immune to normal HR policy, including conflict of interest policies. It’s all up to the individual justices.  Justice Thomas insists that Mrs. Thomas’ beliefs don’t influence him, and we’re supposed to take his word for it. After this latest revelation, that’s a pretty big pill to swallow.

Trans women are being barred from leaving Ukraine. Border guards say they’re men & have to fight.