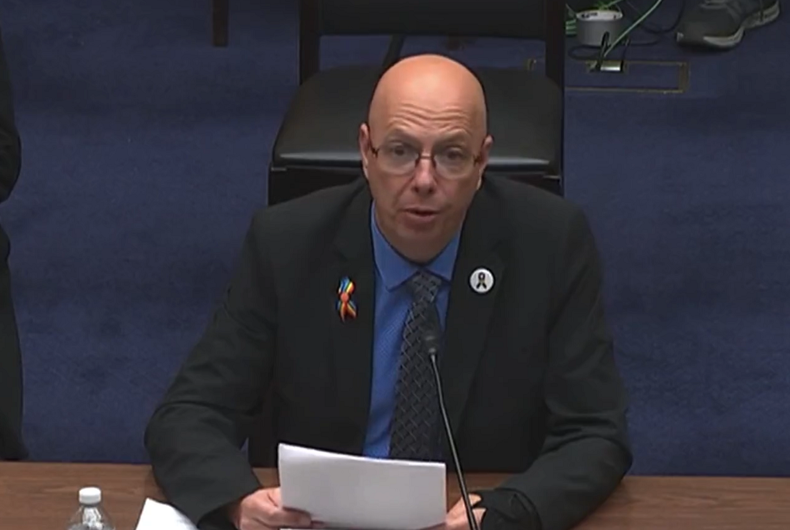 Republican lawmakers refused to believe that there is a problem with anti-LGBTQ+ violence in the U.S. at a hearing on the matter yesterday, even as survivors of the Club Q shooting described the violence they experienced. The owner of Club Q even read hate mail he has been receiving since the shooting happened, but Republican lawmakers blamed “both sides” for it.

The House Oversight Committee held a hearing Wednesday on anti-LGBTQ+ hate. A recent study showed that anti-LGBTQ+ sentiment drove an increase in far-right protests this year and a report from GLAAD found 124 incidents of threats or violence against drag events in 2022 so far. This past summer, Pride celebrations were besieged with violent attacks from the far-right as conservatives online started accusing LGBTQ+ people of “grooming” children, another term for sexual predation.

“We are being slaughtered and dehumanized across this country, in communities you took oaths to protect,” said Matthew Haynes, the owner of the LGBTQ+ bar Club Q in Colorado Springs, Colorado. A shooter with a history of anti-LGBTQ+ rhetoric in November entered the bar and killed five people and injured 18 others.

“We have received hundreds of hate comments,” Haynes said about the fallout from the shooting. He read an example: “I woke up to the wonderful news that five mentally unstable fa***ts and lesbians and 18 injured. The only thing I’m mad about is that the fa**ots had courage to subdue the wonderful killer. I hope more shootings happen. Have a blessed day.”

“The shooter was doing God’s work,” said another message Club Q received. “Five less fa***ts. Not enough. Those that stopped him are the devil. All gays should die.”

But House Republicans refused to admit that the violence was targeting LGBTQ+ people.

“No one should have to experience what you all have experienced,” Rep. James Comer (R-KY)  said at the hearing after he blamed the violence on “Democrat-controlled cities.” The mayor of Colorado Springs is a Republican. “Let me state clearly, as we have consistently said. Republicans condemn violence in all forms.”

“Unfortunately, Democrats are using committee time and resources today to blame Republicans for this horrendous crime. This is not an oversight hearing. This is a blame Republicans, so we don’t have to take responsibility for our own defund the police and soft on crime policies.”

The bill is based on the false idea that children are being turned transgender or gay by adults in their lives, which Greene herself has accused the parents of trans kids and Democrats of doing. Many of the anti-LGBTQ+ incidents this past year have been a result of false online claims that LGBTQ+ people are a threat to children.

Rep. Jody Hice (R-GA) was also at the hearing. He opposes bans on conversion therapy, saying that such bans are “enslaving and entrapping potentially hundreds of thousands of individuals in a lifestyle that they really are not.” During that 2013 radio program, he compared being gay to alcoholism, drug addiction, “tendencies to lie,” and “tendencies to be violent.”

But at the hearing, he said it was unfair to “blame Republicans for the horrendous acts of violence” and that “both sides” are responsible for the rhetoric that leads to hate crimes like the Club Q shooting.

“We are hearing a lot about right-wing extremism and violence,” he said. “Obviously, violence of any type is poison, as is left-wing violence and that which is the fuel that is thrown on the fire by left-wing media. It goes on both sides.”

Out Rep. David Cicilline (D-RI) said he was “disappointed, but not surprised” that almost none of his Republican colleagues asked the witnesses questions about anti-LGBTQ+ violence.

“Republicans are happy to discuss our community when they’re attacking our rights, when they’re crying on the House floor because they oppose marriage equality,” he said, referring to Rep. Vicky Hartzler’s (R-MO) display last week when she started sobbing during a floor speech as she begged Congress to reject the Respect for Marriage Act.

“But when it comes to actually discussing the violence against our community and its causes, just a quick condemnation of what happened at Club Q, and violence broadly, and nothing more.”

“In my view, this is shameful.”

“I woke up to the wonderful news that five mentally unstable fa**ots and lesbians and 18 injured. The only thing I’m mad about is that the fa**ots had courage to subdue the wonderful killer.” pic.twitter.com/PUNC7OVQ4H

Out actor Drew Droege was told that same-sex affection was not welcome at L.A. restaurant