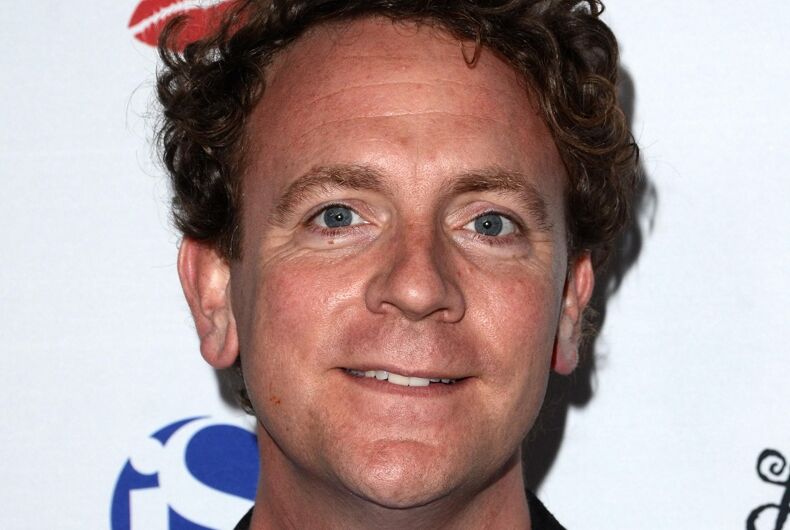 Out actor Drew Droege and his date were told that same-sex affection was not welcome at an L.A. restaurant.

In posts on both Facebook and Instagram, Droege described the incident, which took place on Monday evening.

“Last night, I went on a really nice date. With a really sad, disgusting, hateful moment in the middle,” he wrote.

Droege says that he and his date had finished a pleasant meal at El Compadre in L.A.’s Echo Park neighborhood and were killing time with a second drink before heading to a show downtown.

“We had our arms around each other and kissed a few times,” he recalled. “A manager approached our table and said something to the [effect] of, ‘you guys can’t do that here.’”

Droege wrote that he and his companion were confused. Then the manager told them firmly, “This is a family restaurant.”

Droege asked if anyone in the restaurant had complained, but the manager simply threw his hands up and said, “I don’t care if you’re the president of the United States, we don’t allow your behavior here.”

The actor, who is notable for his impressions of Chloe Sevigny, wrote that he and his date left the restaurant shocked.

“The chilling and pointed tone of ‘we’re a family restaurant.’ ‘We don’t allow your behavior here,’” he wrote. “Ever wonder why gay people often seem nervous? Why do we walk faster? Why do we work so hard to please others and be good little citizens in this world?”

Following Droege’s post, which tagged El Compadre, the restaurant posted a statement on Instagram, which was later deleted, according to The Advocate.

“We have read all of your comments and concerns, and we are looking into what happened Monday night at our Echo Park location,” the post read. “While we work to learn more, we want to make it clear we stand with the LGBTQ community and hold no space for intolerance, hate, or unjust treatment of our beloved guests regardless of race, ethnicity, age, gender, religion, sexual orientation, gender identity, gender expression, disability, or status. We were built off of the core value to do everything with love, and we will do what it takes to continue to warmly welcome any and every guest into a safe community.”

“Please give us time to seek out what happened, gather more information, and take appropriate action. We will update you soon.”

In a subsequent message, reposted by Droege on Wednesday night, the restaurant apologized for the manager’s actions and said that he had been terminated.

“We do believe El Compadre to be a family restaurant, and coming into our restaurant is like coming into our home,” the message read. “In our home we believe in love and equality and the fact that one of our employees made some feel unsafe is not acceptable to us.”

“I have never been asked not to show love in public,” Droege told The Advocate. “Sadly, I have dealt with homophobia all my life and thought that a display of affection in Los Angeles was a safe thing to do.”

He says he has been flooded with support since coming forward with the story. Actors Matt Bomer, Tuc Watkins, and Leslie Grossman, writer Michael Ausiello, and others all posted messages of support.

“Given all this support, I do feel safer and supported,” Droege says. “This was one a**hole. This was not the entire restaurant. This is not our city.”