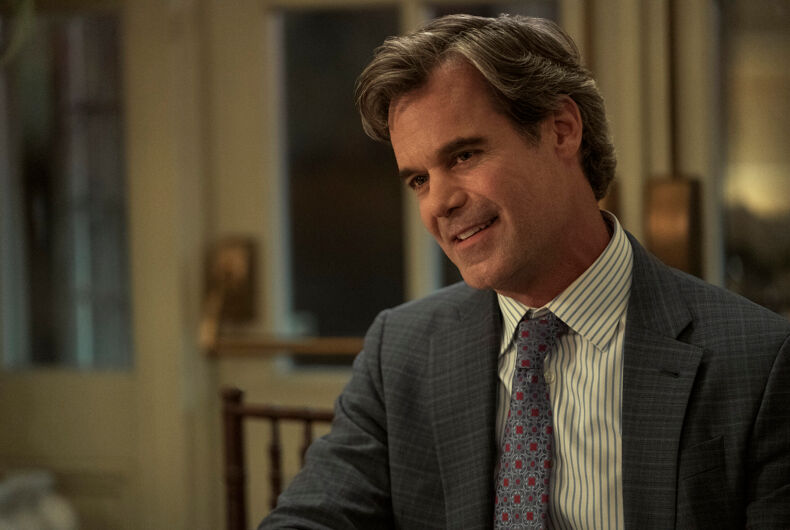 Netflix’s new comedy Uncoupled takes a tried-and-true formula and gives it a whole new spin. Not only does the series, written and created by executive producer Darren Star and Jeffrey Richman, center on gay characters, but those characters are also all in their late 40s and early 50s.

The show follows Manhattan real estate agent Michael (Neil Patrick Harris) as he dives headfirst back into the city’s gay dating pool following a devastating break-up with his longterm boyfriend. Tuc Watkins plays that boyfriend, Colin. The out actor says he’s been trying to work with Starr ever since he wasn’t hired for the pilot of Melrose Place in the mid-90s.

“Darren and Jeff have both created such great shows, and I call them great because I watch them. So, it’s not just a platitude. I like their shows,” Watkins says.

In a recent conversation, Watkins spoke to LGBTQ Nation about Starr and Richman’s latest show, its refreshing perspective, and why an LGBTQ show like Uncoupled has been so long coming.

LGBTQ Nation: What appealed to you about Uncoupled—not just your character, but the perspective of the show, its themes and goals as a piece of storytelling.

Watkins: Ordinarily, in a break-up comedy, the couple breaks up, the ex is a jerk and the hero moves forward and usually lives happily ever after. But this isn’t that show. This is a little more layered and interesting. I think Darren and Jeff have created a more fleshed-out show that is populated by LGBTQ characters that we haven’t seen in the past. And we’ve sort of earned the right to get this far down the road. Neil is the hero of the show and we watch him navigate single middle age life in New York City. But we also follow the ex. We follow Colin and we see how it affected him and the choices that he continues to make. There’s a ripple effect on Neil’s family and his friends and everybody that they knew in common.

One of the things that I really appreciate about this show is, I’m a gay actor who has played gay roles since the 90s. And, at the time, back in the 90s, I was told, “You can’t be gay and play gay roles if you want to play other roles.” At the same time, I was told, “You’re gay, so you don’t get to play the straight roles either.” So, I was kinda stuck between a rock and a hard place. When I realized the confluence of those two sort of awful choices, I just chose roles that were great roles. A lot of them happened to be gay roles, and there weren’t that many not that long ago. And when they were available, they were often the gay clown or the terribly troubled person or the psychopath. So, to see this evolution where we now have a show like Uncoupled, which is populated by members of the LGBTQ community—and everyone is so unique. It’s not just one character who represents, as a token, our community. There are several people who get to be their own individual tokens!

In the premiere, Colin turns 50, and that seems to be at least partly what leads him to leave Michael. What is the show saying about that experience, the significance of turning 50, and what it’s like specifically for gay men?

Well, I’ve done all those things. I am a gay man, I have turned 50, and I have experienced a break-up in midlife. And it’s rotten; break-ups stink no matter what—when it happens to you. When it happens to someone else, it’s funny, so watch Uncoupled!

But what I think it has to say is, when those things befall us, they’re awful. I know when it happened to me, if I’d tried to skirt the issue and ignore it, it was going to catch up to me anyway. I did go on those apps. I did go on Tinder and I went on eight different Tinder dates—the same date with eight different guys. So I know what it’s like. My only piece of advice is if you meet someone on an app, try to meet them in real life as soon as possible. Don’t drag out the texting thing, because the person who shows up is always different than the person you meet on a phone. Including myself!

What about turning 50? Do you think that’s a significant or troublesome turning point for gay men in particular?

I don’t think it’s necessarily 50 or 40 or a round number. But I do feel like I went through a midlife crisis. I don’t think it was a round number, but when I had ended a 12-year relationship and I decided I wanted to be a dad and I went through the process of surrogacy to have my own kids—so many things were happening at one time that it was sort of a fork in the road. There were several forks in the road that happened all at once. So, I don’t think it’s necessarily 50. But it’s often an outside event that happens at that age. If you’re broken up with at 48, then your midlife crisis might be 48.

I found myself thinking a lot about the generation of gay men at the center of the show. For so long, the coming-out narrative has kind of been the dominant narrative in LGBTQ filmmaking, so coming-of-age type stories have been the majority of what we’ve seen. What do you think shifting the focus to men in their late 40s and 50s does for LGBTQ storytelling?

I think historically, anytime we’ve seen a minority portrayed in entertainment, it’s usually through issues. With gay guys it was AIDS, it was coming out. And our issues are usually our tough moments in life, so we’re often seen as troubled people. But what naturally progresses—and I’ve seen progress in the LGBTQ community through entertainment—is: it did start with those things. We were one-dimensional characters who were defined by our issues. But now, we’re all the way up to Uncoupled, which has a cast full of LGBTQ characters and they’re more layered, they’re more interesting. I think we as a community can watch something like this and go, “I don’t have to be just that one character.” There’s more to see.

We were celebrating gay marriage not that long ago. We’re having to stand up for that again, but what comes with gay marriage? Gay divorce. So, we’re going to reflect what we see in the real world through our entertainment.

They came of age at a time when coming out was maybe more difficult, when HIV/AIDS was increasingly becoming manageable. They saw gay marriage go from unimaginable to something that was legalized and embraced, and now something that’s once again threatened. They’re kind of sandwiched between a generation devastate by AIDS and a generation that maybe had an easier time coming out. How do you think all of that has affected their sense of themselves and their relationship to sex and relationships?

I imagine that every generation feels like they are a bridge between the generation before them and the generation after them, and somehow feel a little bit different. The way that I feel like my generation in our 50s now—our forebears went through a holocaust. We lost so many of our soldiers, and I feel like I’m one of the first people who was the recipient of what it meant to have safe sex. I knew what that was, I practiced it, and I think it may have saved my life. There are people who came not that much before me who were not aware of that. And the generation after us, there’s drugs that you can take to avoid the horror that people just before me experienced.

I think those of us who might feel in the middle right now, I feel like we have a lot of empathy. We see people younger than us who are members of the LGBTQ community who we identify with because we’re in the community. At the same time…woke is a new word, and adhering to what that means is always awkward for the older person. Now, I’m in that group that’s the older people. So, when it comes to identifying as something more than just straight or gay or bi—there’s a broader spectrum, and there should be. But those of us in [our 50s], I think sometimes we feel a little awkward. We’re here for it. But sometimes we’re clumsy when we interact with it. I feel like we just need a little patience, because we’re on the same team. Sometimes we’re just clumsy because we’re getting older.

In the series, Michael and Colin are unmarried. I wonder if the current state of marriage equality in the U.S. has made you think differently about the characters’ decision not to get married?

That’s an interesting question, and it makes me think of the fact that approximately a decade ago, maybe 15 years ago when Prop 8 came out in California, I was in a long-term relationship and we had the opportunity to get married and we did not. And people asked, “Why aren’t you?” I don’t remember the words I used to say why we didn’t, but for us it didn’t feel right. Years down the road, that relationship having ended, I think I have a more informed reason for why, maybe, we didn’t. So, I feel like I have experience in that arena.

These guys in Uncoupled, Michael and Colin, we’ve been together for 17 years and we never got married. I think that’s a legitimate question. The reason why we split is a mystery initially. But that mystery does become more revealed as the series goes on.

Uncoupled is a show created by gay men, starring out actors, directed by an out filmmaker. My sense is that that kind of thing is much more common than it used to be—that there are more opportunities for out actors in particular these days to play LGBTQ roles. How has that impacted your experience of the business?

What I feel like I’ve experienced was: those of us in the LGBTQ community who have worked in this industry for a long time—and I started in the early 90s—there was this unwritten thought that was: You gotta keep it under wraps. Whether it was be closeted… There was never anything that was like we were allowed to be out and proud. Our issues brought us to the forefront. And I do think it’s changing.

I recently did a series for a guy named Kit Williamson who created Eastsiders, which was on Netflix. It’s an LGBTQ story and it is written by and the people who work on it are primarily members of our community. [Kit] called me and asked me to be part of it and he asked me to play a straight character on that show. And I said, “Are you specifically asking a gay actor to play a straight role in your gay show.” He said, “Yes.” And I said, “I like the show and I like your politics. I’m in.”