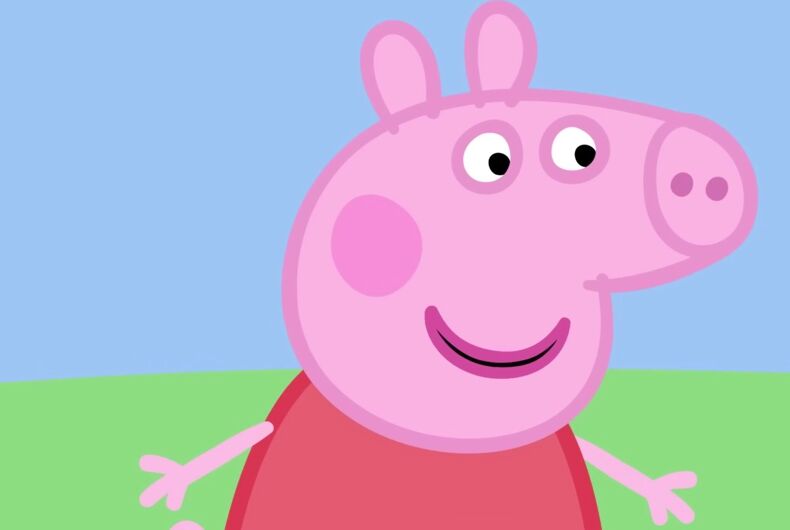 The anti-LGBTQ One Million Moms (OMM) is circulating a petition against the beloved British children’s show Peppa Pig after it aired an episode featuring a young polar bear child with two polar bear moms.

It states that OMM is “concerned with the normalization of a sinful lifestyle choice during a children’s show.”

“This type of sexuality should never be included in a cartoon designed for children, much less praised. It is especially distressing since this popular children’s program is viewed in 180 countries,” the petition said.

The petition is asking Hasbro, which owns the rights to Peppa Pig, to “stick to entertaining and providing family-friendly programming instead of pushing an agenda.”

The Peppa Pig episode in question aired back in September. The show has been on for 18 years but this was its first time featuring an LGBTQ couple.

In its episode called “Families,”  a character named Penny introduces her two moms.

“I live with my mummy and my other mummy. One mummy is a doctor and one mummy cooks spaghetti,” Penny says.

The episode came about in response to a petition to include a same-sex couple in the show that garnered almost 24,000 signatures.

And the episode caused international panic among conservatives. Far-right politicians in Italy denounced it, as did Russian lawmakers, one of whom called the cartoon pig a “tool of hybrid war.”

Federico Mollicone, culture spokesperson for the conservative Brothers of Italy party, declared that the nation “cannot accept gender indoctrination” and claimed that “once again the politically correct has struck, at the expense of our children.”

Senator Isabella Rauti, a member of the party, called the episode “gender propaganda” and stated that the “Brothers of Italy have long denounced the attempt at indoctrination by supporters of gender theories.”

In Russia, it was member of Parliament Alexander Khinshtein who denounced the show.

Now, seemingly a bit slow on the uptake, OMM is getting in on the action. The group is a division of the American Family Association, a Southern Poverty Law Center designated hate group.

The group routinely campaigns against LGBTQ representation in commercials, television shows, and the media and states on its website that the goal is to “stop the exploitation of our children, especially by the entertainment media.”