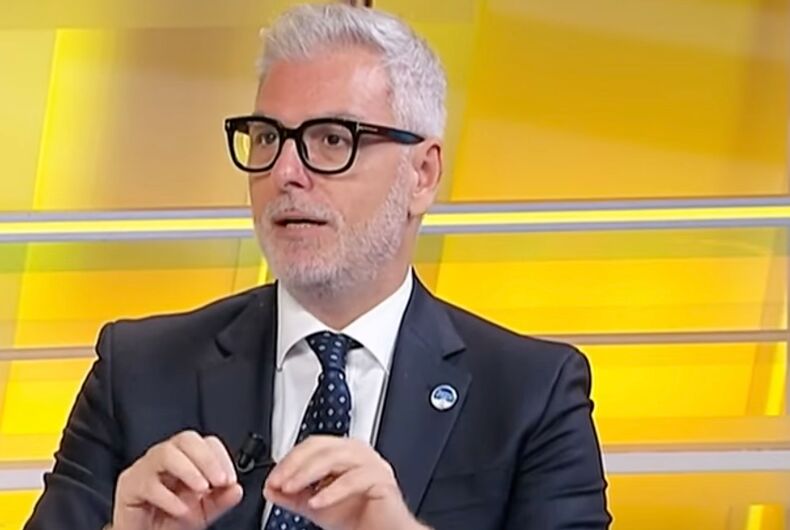 A far-right political group in Italy is up in arms over a popular British children’s cartoon that recently featured a lesbian polar bear couple.

Federico Mollicone, culture spokesperson for the conservative Brothers of Italy party, declared that the nation “cannot accept gender indoctrination” and claimed that “Once again the politically correct has struck, at the expense of our children.”

In its episode called “Families,”  a character named Penny introduces her two moms.

“I live with my mummy and my other mummy. One mummy is a doctor and one mummy cooks spaghetti,” Penny says.

The episode came about in response to a petition to include a same-sex couple in the show that garnered almost 24,000 signatures.

Now, Mollicone is calling to ban the episode from all of Italy.

“We ask Rai, which buys the rights to the Peppa Pig series in Italy with a fee from all Italians, not to broadcast the episode in question on any channel or web platform,” he said.

Senator Isabella Rauti, a member of the party, called the episode “gender propaganda” and stated that the “Brothers of Italy have long denounced the attempt at indoctrination by supporters of gender theories.”

“As far as we are concerned, we reiterate the right of children to be considered as such and not to be exploited; we also believe that they have the right to have a father and a mother and a traditional natural family model which for us represents a value to be defended, safeguarded and protected,” Mollicone said.

Italian elections are coming up at the end of the month, and the anti-LGBTQ party, along with conservatives from other groups, are expected to easily win a majority in both houses of parliament.

The Brothers of Italy party leader, Giorgia Meloni, is also expected to win the race for Prime Minister.

Brothers of Italy played a large role in last year’s defeat of the “Zan Bill,” which would have classified anti-LGBTQ violence as a hate crime and increased anti-discrimination protections for LGBTQ people.

The bill was named for its sponsor, out gay parliament member Alessandro Zan. In the wake of the party’s anger over Peppa Pig, Zan mocked them in a tweet: “[Brothers of Italy] raises the alarm, a new enemy is besieging the nation:@peppapig.”