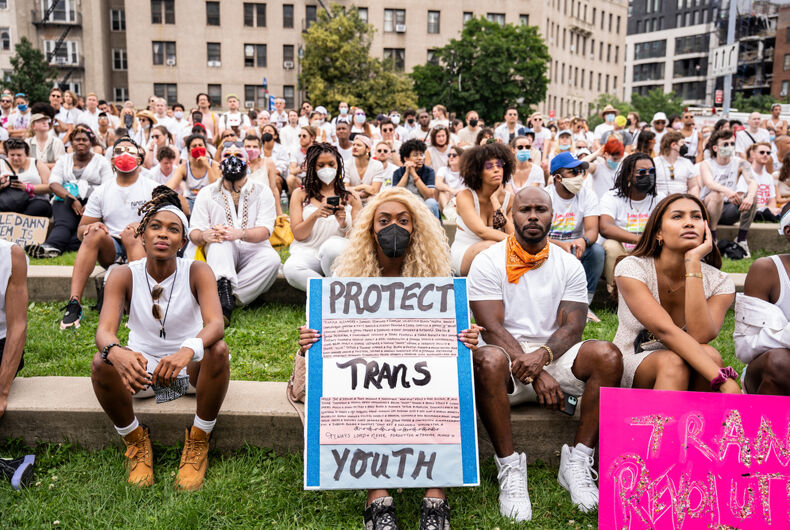 According to the Phoenix New Times, more than 100 students walked out of Hamilton High School in Chandler, Arizona, on September 29. The demonstration was organized by Support Equality Arizona Schools, an organization founded by 16-year-old high school student Dawn Shim to advocate for minority and LGBTQ students.

Shim spoke to the students gathered on the lawn at the nearby Chandler Public Library, with a message aimed directly at Arizona’s Gov. Doug Ducey (R).

“These bills are killing us,” Shim said. “They are killing our peers. We do not need any more students hurt by your actions. We aren’t out here missing our school day and interrupting our education because we want to. We have been forced into it.”

“Across America, more and more anti-LGBTQ legislation is being passed by the people sworn in to protect us,” Shim continued. “We also have a burgeoning mental health crisis among young teens. These two factors are not coincidental. The Trevor Project finds that, in 2022, almost 45% of LGBTQ youth considered suicide in the last year.”

Across town, roughly 200 students staged a simultaneous walkout at Chandler High School. According to the AZ Mirror, Support Equality Arizona Schools also has supporters in Gilbert, Tucson, and Flagstaff.

The laws students were protesting all went into effect on September 24 and included laws against trans girls participating in girls’ sports; bans on minors accessing gender-affirming healthcare; and removing “sexually explicit” books from libraries.

Trans students were particularly worried about a new law that forces schools to share confidential student records, including health and counseling records, with parents. They say that could put transgender students in danger.

“School should be a safe place. Teachers are often the only people students with homophobic parents can talk to, and this law shatters that,” said 14-year-old Ace Yates.

“I have to stay hidden half of the time,” said trans student Jay Nash, who said he has to keep his gender identity secret from some unaccepting family members. “It sucks.”

Said Hamilton student Blues Patrick, “It is embarrassing that we live in a state and a country where people are at risk simply for being who they are and loving who they want.”